On the ABC News radio this morning (9 Sept 2012) we heard that private coal companies are demanding compensation for carbon trading costs from the Victorian Government and apparently this is being taken seriously!

CO2 Group's Chief CEO, Andrew Grant says that anthropogenic climate change science is quite simple really: "It's a function of increased population on the earth." Candobetter.net received the following as a press release today. We obviously like the idea of wildlife corridors connecting national parks.

Most objections to Australian Prime Minister Julia Gillard's Carbon Tax are founded on the apparent belief that it is possible for human society to continue its wasteful consumption of non-renewable natural resources and destruction of our natural environment without posing any risk to the life support system which exists in this tiny corner of a Universe, mostly barren of life. 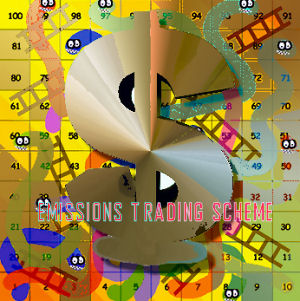 Emission Trading Scheme is the latest trading scam devised to extract money from the great unwashed. These are the poor shareholders, mortgaged mums and dads, small businesses and pensioners. All forced to survive on limited incomes.

This was sent to me on 2 April.

Global warming, carbon trading and greenhouse gas emissions are something most people are too busy to stop and think about. When there is no fuel left for their four wheeled drives it will be too late!

Individual attempts to be carbon conscious, cut backs in energy and recycling are not enough to reduce emissions. Governments, industry and business sectors must make a concerted effort to find an effective solution to reduce their emissions since they are the largest perpetrators of CO2 emissions. Investment in clean coal is a fallacy (a leap in the dark). Clean coal is a mere excuse to keep the wheels of trade and profit for another decade. Carbon trading schemes are a means to allow this to happen. The greatest challenge facing government is to investment in new technology not, as present, in subsidies to the coal and oil industries.

The impact of an Emission Trading System for Individual Enterprises in the EU has far too many inconsistencies The EU over allocated trade off emissions to industry. Their scheme is a lesson to Australia. Poor commitment and a reluctant to engage in rules and guidelines or a lack of interest in the environment are just a few of the EU problems. Can we learn from the EEC experience? The EEC first phase of a carbon trading scheme did not include transport emissions but transport will be included in their second phase. Will Australia include transport in their first trading scheme? If not why not?

Carbon trading appears to be a very Catholic idea– the big corporations are encouraged to sell off indulgences for the right to continue polluting. This does not address the real increases in emissions or future consequences.

Australia’s emissions have increased over the last decade Australia is one of the highest per capita emissions of greenhouse pollution in the world today. It has been on the back foot since it refused to sign Kyoto Protocol ten years ago. The result is industrial emissions increased during that time and present policy will hardly bring us to the 1996 emission rate. Both government and industry’s priority to economic policies have failed to control emissions. The result is pollution escalates to crisis point while boom profits become immoral for the few and a disaster for the rest of the community.

Kyoto clearly identifies the reality of a need for a worldwide shift in thinking. Melting ice caps rising sea levels, drought, floods, and depletion of habitat, species, deforestation and wild weather patterns have increased insurances worldwide. The CEO of the RAC Insurance Mike McCarthy said “There is a doubt that the insurance industry will survive the increasing demands! Australia has no flood maps for natural disasters and recent flooding illustrated the huge problem for the insurance industry. Everyone must learn to adapt and innovate otherwise they may find they will not be covered by insurance in future,” he said. Planners need to make sure houses are sustainable build in safe places, not on the coastal edge, near rivers or wetlands that are likely to flood. It is time developers, local councils and State governments are forced to change their attitude towards coastal development.

The greedy have become greedier. Contracts are signed to dig up and ship out WA’s minerals as fast as possible. No one takes responsibility for increasing emissions or pressure on the natural environment.

Housing, energy and water shortages, rising cost of health, education and welfare services have become the norm for western governments. In the rush to sign resources contracts politicians have not acknowledged a need for a population policy that will help to manage the future climate and emission crisis. This is not just a federal issue it is a state, local government and world wide community issue.

The greedy have become greedier. Contracts are signed to dig up and ship out WA’s minerals as fast as possible. No one takes responsibility for increasing emissions or pressure on the natural environment. Meanwhile Australian governments and the corporations make huge profits and water and energy supplies are rapidly depleting.

We all have a moral obligation and responsibility to care for the earth. To move forward in the way we think, use energy and take advantage of new opportunities and technology, embrace new methods and skills. Solar has been a government policy failure in this land of sunshine. Failure is not an option we must move forward together as part of a global community.

My profile: My Welsh birth and Anglican spirit drives my social conscience and Celtic thirst for knowledge to work for justice and care for the earth and its communities. Retirement from lecturing at TAFE has given me the freedom to act local and think global. Who said retirement was boring?