Culex molestus is thought to have been introduced into southern Australia in the 1940s, hitching a ride into the country with travelling American military personnel. The species is known in other countries for the spread of West Nile virus. Since the 1940s the mosquito has been found in all states except Queensland and the Northern Territory. Where exactly the mosquito came from before arriving in Australia is still a mystery but it is well known from cities in the US and Europe. The mosquito infamously made a meal of Londoners sleeping in the Underground during the Blitz and is often commonly referred to as the London Underground Mosquito. The culex species, although not necessarily Culex molestus, has been implicated in the spread of diverse diseases which include Eastern Equine Encephalitis, Japanese Encephalitis Virus, St. Louis Encephalitis, and Western Equine Encephalitis. 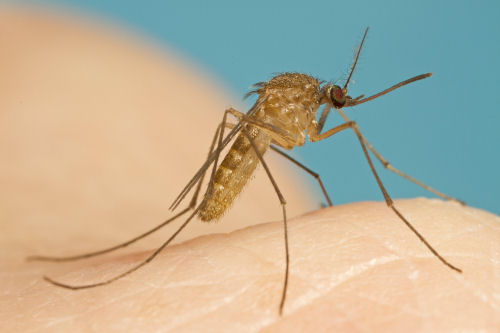 (19 June 2012) A secretive and exotic species of mosquito found across much of Australia has revealed a new twist on the insect’s famous ‘blood-sucking’ reputation to researchers at the University of Sydney.

Researchers discovered that rather than breeding in ponds, pools or wetlands, the Culex molestus mosquito has adapted to life underground, particularly in septic tanks and disused stormwater pipes.

Unlike other mosquitoes, the Culex molestus can also develop their eggs without first requiring a blood meal.

Dr Webb is the team leader of a study on the mosquitoes which has been published in this month’s edition of the Journal of Vector Ecology.

“We have spent the last two years chasing the species, which has adapted superbly to life beneath our cities,” Dr Webb said.

“Finding this mosquito isn’t easy. Instead of wandering through pristine wetlands, we were snooping around stormwater drains and other polluted structures,” said Dr Webb.

“However, the toilet blocks in urban parklands were where we really struck gold. The disused septic tanks associated with these structures are where this mosquito is commonly found.”

While the majority of pest mosquitoes require blood to develop their eggs, the female of this species can develop and lay a batch of eggs using nutrients stored earlier in its life cycle.

This phenomenon is known as autogeny and has been documented in a number of mosquitoes.

“The breakthrough with our study is that if this mosquito is offered a blood meal, it won’t bite until its first batch of eggs has been laid. We believe this is the only Australian species to exhibit this behaviour” Dr Webb said.

“Once that first batch of eggs has been laid, they are on the hunt for blood and can be severe nuisance-biting pests.”

It is difficult to know why the mosquito ignores the offer of blood but given the absence of suitable animals to feed on in underground tanks and pipes, this biological adaptation ensures the mosquito can exclusively exploit these habitats not just during the summer but throughout the year.

Planners and Developers need education in the risks of exacerbating mosquito-borne disease when they clear new land, disturb soil and water, and create new water-storage opportunities.

Dr Webb mentioned that in NSW some councils are requiring developers to incorporate mosquito opportunity prevention into their plans.

“One of the major implications of this work is that we must be mindful of the mosquito risks when designing subterranean water storage systems in our cities so we do not create new opportunities for mosquitoes.”

“Ensuring water storage structures are screened or designed to limit the opportunities for mosquito access is crucial. Perhaps more importantly, when assessing the risks of mosquito-borne disease, these underground habitats shouldn’t be ignored,” said Dr Webb.

The community should be aware of the risks involved in opportunistically conserving water in all sorts of containers as the cost of water rises in Australia. Dr Webb described how, although a well-constructed water tank may be impermeable at first, over time most water-storage becomes vulnerable.

The presence of fish in natural water-sources is a safety factor that is lacking in most artificial storage containers. Fish love mosquito larvae and, together with other predators of mosquitoes in natural environments, keep diseases associated with mosquitoes down.

Culex molestus is thought to have been introduced into southern Australia in the 1940s, hitching a ride into the country with travelling American military personnel. Since then, the mosquito has been found in all states except Queensland and the Northern Territory.

Where exactly the mosquito came from before arriving in Australia is still a mystery but it is well known from cities in the US and Europe. The mosquito infamously made a meal of Londoners sleeping in the Underground during the Blitz and is often commonly referred to as the London Underground Mosquito.

“Mosquitoes have adapted to a wide range of ecological niches, from coastal rock pools to alpine snowmelt pools. Advancing our understanding of how mosquitoes adapt to their habitats will improve the ways we manage their pest and public health impacts,” Dr Webb said.

I asked Dr Cameron Webb whether there had been any epidemiological reasons for studing Culex molestus.

Dr Webb said that the species belongs to a group internationally known to be important for spreading diseases like West Nile Virus. The species has not been studied well in Australia. Recent study has focused on the species with the aim of filling a gap in our knowledge in case of any problems in the future.

How does culex molestus get into closed systems like disused underground pipes and septic tanks? Do they seep in as 'wrigglers' or do they find other ways in?

Although these underground spaces appear closed to us, they presumably have all kinds of fissures and small openings, particularly with earth movement over time.

"We should not underestimate how clever they are," says Dr Cameron Webb.

There are few if any marine or aqueous environments that don't have their mosquito. Wherever a mosquito can find a toe-hold, it is likely to establish. In the case of Culex molestus lack of fish and other predators in its underground lairs is an obvious advantage.

Some mosquitoes require sunlight to dry their chitinous wings before they can fly. Culex molestus, which spends much of its life underground, must have found some way to do without sunlight in this process. There is a lot we still do not know about this mosquito and other mosquitoes.

There are about 300 species of mosquito in Australia.

With climate change and expected warming of south eastern states of Australia, there is also a risk of in-migration of tropical mosquitoes and their diseases, including those that carry dengue fever (Aedes aegypti and Aedes albopictus and malaria (notably the anopheles mosquito).

The contributing authors on the paper are Nur Faeza Abu Kassim and Professor Richard Russell from the Department of Medical Entomology at the University of Sydney.