Update on Joe Toscano, Melbourne By-Election and the ABC Sheltered workshop for the IPA 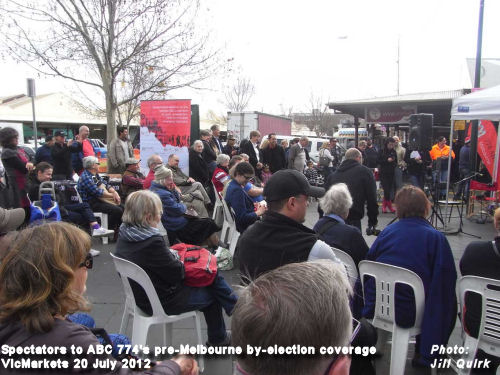 What would constitute democratic balance on the ABC

What was missing in this argument was that the IPA represents population growth, econonomic growth, overdevelopment and privatisation as a four horse plank. The ABC has failed to similarly anoint the opposing point of view, which is for a steady state economy with only replacement development and with state-owned and therefore publicly accountable services and assets. The IPA is also not the only pro-growth professional representative: the ABC is a frequent vehicle for a multitude of economic rationalists, but notably for property development organisations and representatives, including the ubiquitous Bernard Salt, who pushes a simplistic pro-growth message in the Murdoch press at State and Federal level.

Having said this, as the counterweight to Steve Bracks, the ex-Premier of Victoria, on the Jon Faine Conversation hour in a Conversation Hour population forum on 19 April, 2010, I personally put this viewpoint strongly, as a population sociologist and as a spokesperson for SPA Victoria on the subject of Victoria's out of control population growth and its undemocratic nature. [Download or listen to the MP3 here.] After the show I was photographed with the ex-Premier and this Conversation Hour Population Forum recording became available for download and comment on its own ABC page. This however was a one-off, despite the huge success of that hour, when the phone lines were innundated with people supporting my point of view and virtually no support for Bracks's, which was pro-growth. Somewhat obviously, I thought, the photograph of me and the ex-Premier was never published on this page. Comments on the page were early disabled and never again effectively enabled, despite my making two written complaints about the matter. I know that many people tried and failed to add their comments to that page.

"Nothing highlights the moral bankruptcy of significant sections of the ABC more than Melbourne's 774 local radio’s decision to host a special Melbourne by-election program at the Queen Victoria Markets in Melbourne on Friday morning in which only the more “popular” candidates will be interviewed. Over the past two decades significant sections of ABC television and radio have been little more than commercial clones.

Afraid of its own shadow significant slabs of the government gelded ABC have been transformed into sheltered workshops for the Institute of Public Affairs. Week after week, month after month, year after year debate within the ABC is contained within strictly defined boundaries. While radical right wing opinions dominate ABC television and ABC radio, radical left wing opinions are shunned.

Just two weeks ago I was approached by an ABC television producer to appear on ABC News Breakfast on ABC1 and ABC News 24 to discuss the launch of Communitysavesfairfax.com. Three hours later the same producer, alerted to the fact I had a left wing radical pedigree, withdrew the invitation. Ironically, I had been involved in a debate that lasted over 20 minutes on Sky News Business Breakfast two days previously.

The stacking of the ABC Board with neo-conservative Board members, the appointment of neo-conservative senior bureaucrats to the ABC, the introduction of short term contracts and the outsourcing of production has created a climate of fear within the ABC. The ABC is publicly owned. We all pay our eight cents a day to watch and listen to Aunty. It’s time a thousand flowers were allowed to bloom among the stunted old perennials growing in much of the ABC wastelands."

It’s ironic at the very moment Ken Williams, the CEO of News Limited, publicly indicated he would use News Limited’s considerable resources to derail the Gillard government’s legislative attempts to hold the corporate owned media to account, one arm of his far flung corporate empire is involved in crass, crude political censorship. I, like the other 15 candidates standing in the Victorian Melbourne By-election was approached by the Melbourne Leader (which claims it has a readership of 51,000) to provide a “profile” for the Melbourne Leader.

A picture and a fifty word opinion piece on “my plans” for Melbourne. I emailed back indicating I believed a “sullen, angry, disillusioned, disgruntled electorate wants ideas, not profiles”. I was surprised to receive an email that stated the Melbourne Leader would be publishing that I “did not submit the profile as requested”. Any normal reader looking at the article in the Melbourne Leader would think I didn’t respond to their request.

It is both disingenuous and dishonest for the Melbourne Leader to imply I didn’t respond to their request. I sent the newspaper three
emails outlining my position regarding their “profile”. At the very least they should have stated they declined to publish my comments.

You can hear more from Joe Toscano on 3CR in the latest podcast, which is all about the above, and you can go and vote for him, if you wish, at the Melbourne By-Election tomorrow, 20 July 2012. Good luck Joe!