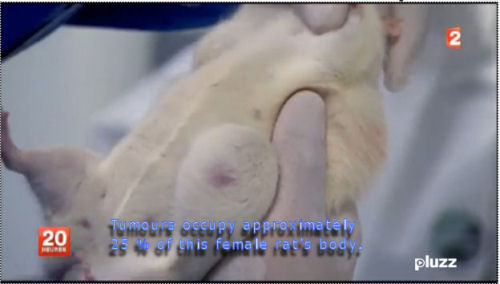 The study was: "Long term toxicity of a Roundup herbicide and a Roundup-tolerant genetically modified maize," published in Food and Chemical Toxicology, http://www.sciencedirect.com/science/article/pii/S0278691512005637. The authors were Gilles-Eric Séralini, Emilie Claira, Robin Mesnagea, Steeve Gressa, Nicolas Defargea, Manuela Malatestab, Didier Hennequinc, Joël Spiroux de Vendômois, involving Caen University Institute of Biology and the University of Verona Department of Neurological, Neuropsychological, Morhphological and Motor Sciences. The study abstract has been published at the end of this article.

The French study, widely reported on French radio and television yesterday, fed 200 rats genetically modified foods for two years - the life-time of a rat. Apparently this is one of few or perhaps the only study over such a long period, where most studies on rats only go for about three months.

In females after 13 months there were multiple mammary tumours. The report on Journal televise France2 showed a female rat with three huge tumours occupying about one quarter of her total body weight. In males after the same period, there were liver and kidney tumours or abnormalities.

The results are said to have shocked the scientists conducting the study. They appear to show unequivocally that consumption of a lot of genetically modified food has major impacts on foetal and adult health for rats, so why not for humans? There increases in cancers and deaths were huge.

Journalistic coverage shows a field of genetically modified sweet corn with a commentary, "Is this corn a poison? The results of a study say that it is."

In France, since 2008, a moratorium prevents the cultivation of genetically modified foods, but does not prevent importing them in products used to nourish food animals and for use in pastries and other products. The French government appears to be taking the risks very seriously. The French Health and Saftey Office has been delegated to report on the matter. French Greens have demanded urgent action and the French Minister of Agriculture, Stéphane Le Foll, says he will take the study up with the European union for much stricter appraisal and control of genetically modified industry activities.

A Monsanto spokesperson has said that it is too early to comment on the study results, which are as yet not well known. 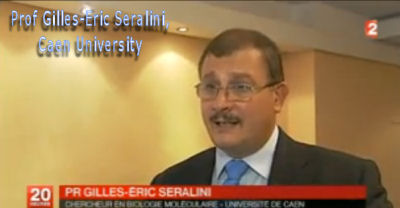 Eric Seralini, the scientist heading the experiment said that they had pushed further than previous experiments testing the impact of a genetically modified food and pesticide. He is described as living in comparative isolation and conducting his work in comparative isolation and having been subjected to a lot of pressure - criticism and restrictions on funding - from the GM lobby, which is very very influential and wealthy.

The two year study now has to be reproduced to show that it is truly valid and this will (naturally) take at least two more years. The scientist who headed the study was known for his scepticism about the safety of genetically modified foods, which means that he was independent of the GM lobby, but also that the GM lobby will probably try to accuse him of bias. The GM lobby has multi-billions of dollars riding on discrediting the results of Seralini's work.

"Long term toxicity of a Roundup herbicide and a Roundup-tolerant genetically modified maize."

"The health effects of a Roundup-tolerant genetically modified maize (from 11% in the diet), cultivated with or without Roundup, and Roundup alone (from 0.1 ppb in water), were studied 2 years in rats. In females, all treated groups died 2–3 times more than controls, and more rapidly. This difference was visible in 3 male groups fed GMOs. All results were hormone and sex dependent, and the pathological profiles were comparable. Females developed large mammary tumors almost always more often than and before controls, the pituitary was the second most disabled organ; the sex hormonal balance was modified by GMO and Roundup treatments. In treated males, liver congestions and necrosis were 2.5–5.5 times higher. This pathology was confirmed by optic and transmission electron microscopy. Marked and severe kidney nephropathies were also generally 1.3–2.3 greater. Males presented 4 times more large palpable tumors than controls which occurred up to 600 days earlier. Biochemistry data confirmed very significant kidney chronic deficiencies; for all treatments and both sexes, 76% of the altered parameters were kidney related. These results can be explained by the non linear endocrine-disrupting effects of Roundup, but also by the overexpression of the transgene in the GMO and its metabolic consequences.

-A Roundup-tolerant maize and Roundup provoked chronic hormone and sex dependent pathologies.
- Female mortality was 2–3 times increased mostly due to large mammary tumors and disabled pituitary.
- Males had liver congestions, necrosis, severe kidney nephropathies and large palpable tumors.
- This may be due to an endocrine disruption linked to Roundup and a new metabolism due to the transgene.
- GMOs and formulated pesticides must be evaluated by long term studies to measure toxic effects.."

http://geneticroulettemovie.com/This movie on GMOs will stop you cold. You can watch it free for the next day or so. After that it costs. Turns out this kind of stuff has been ruining farms, killing their animals, killing pets and causing terrible health problems in humans, but the influence of Monsanto in the US government health regulation has prevented the many complaints and research reports from getting any response. It is all just ignored. You need to get to this movie in the next day or so if you want to see it for free. Albert

Yes, definitely see the documentary Genetic Roulette at http://geneticroulettemovie.com/ - a wonderfully persuasive movie about the dangers of genetically engineered food.

Systems under threat due to climate change

If the growth-ists think that GM foods will feed continuing human numbers, then climate change will also hit their plans. In a world first, researchers have shown that many species of fruit fly won't survive even a modest increase in temperature. Many are close to or beyond their temperature safety margin - and very few have the genetic ability to adapt to climate change. Vanessa Kellerman, of Monash University's Molecular Ecology Research Group, said the scientists looked at the heat resistance of 100 different species of fruit flies. ' It was found that only a few species could withstand high temperatures, and that these species were all closely related - and had evolved in a more extreme climate. Read more: http://www.theage.com.au/environment/climate-change/fruit-flies-at-boili... A CSIRO project started in late 2008, has built on the results from the 2008 Implications of climate change for Australia’s National Reserve System report. There is compelling evidence, gathered over past decades, that the impacts of climate change on the world's biodiversity are likely to be significant. "Increases in the atmospheric concentration of CO2 and other greenhouse gases (GHG) will lead to changes in temperature and rainfall, and the occurrence and intensity of storms, wind, run-off, floods, droughts, fires, heat waves, El Niño and other climate cycles. These changes affect primary productivity and many biological processes; hence there is every reason to believe many if not virtually all species on Earth will be affected. " Download the report here: http://www.csiro.au/Organisation-Structure/Flagships/Climate-Adaptation-... One-fifth of the "spineless creatures that rule the world" may be at risk of extinction, according to a new study. The study, produced with the International Union for Conservation of Nature, could also have implications for humans. The value of insect pollination of crops has been valued at $US191 billion a year, according to the report. The projected increase in the world's human population to 9 billion by 2050 from 7 billion now and other factors such as man-made climate change could make things worse for invertebrates. http://www.abc.net.au/news/2012-08-31/spineless-creatures-at-risk/4237464 It's about time our population was not "projected" and fired into the dangerous zone of planetary extinctions and treated as inevitable, and uncontrollable!

A labor appeals court in north-central Argentina ruled that the construction of a Monsanto plant is unconstitutional, halting work on the site. See RU video here: http://www.rt.com/news/monsanto-argentina-plant-halted-343/ The three judge court ruled 2-1 in favor of the activists who filed a legal appeal against Monsanto’s GMO seed plant on environmental protection grounds in the municipality of Malvinas Argentinas, located in central Cordoba Province. “We have filed a criminal complaint to inform the prosecutor of certain irregularities in violation of environmental law that have occurred in the heart of the Ministry of the Environment which is involved with authorizations of projects,” attorney Raúl Montenegro told Revolution News. The construction at the site has been suspended until an environmental assessment is completed to determine the plant’s future impact on the area. Local newspaper La Voz reported that the environmental study could be completed as soon as early February. The multinational company said it will appeal the decision. “We consider our right to build legitimate since we have complied with all legal requirements and have obtained authorization to build according to the regulations,” said Monsanto’s statement. The company stated that it already conducted an environmental assessment, which is currently under the review by the provincial Secretary of the Environment. Activists had been blockading the construction site for 113 days, preventing workers from completing work on the plant. Monsanto countered in a statement that “for over three months Monsanto employees and contractors had not been able to exercise their right to work, due to the action of extremists who blocked the site, incited violence and systematically ignored judicial decisions." In October a new report revealed that pesticides sold by Monsanto are linked to health problems ranging from birth defects to elevated rates of cancer in Argentina. A lack of regulations has led to widespread misuse of Monsanto’s products in the Latin American nation. An Associated Press investigation pointed to a clear link between the use of pesticides sold by Monsanto and worsening health problems in Argentina. The AP documented a number of occasions when toxic pesticides were used close to populated areas and consequently contaminated the water supply and caused health problems. The multinational company is facing global criticism elsewhere as well. In October thousands took to streets across the world’s cities to protest the use of GMO products, with Monsanto a common target. Over 50 countries have been taking part in the march for world food day, and across 47 different US states. The demonstrators have been calling for the permanent boycott of Genetically Modified Organisms (GMOs) and “other harmful agro-chemicals,” according to March Against Monsanto’s official webpage. A previous anti-Monsanto protest was held in May. It started as a small event, but turned into a global campaign with over 2 million people in 436 cities, across 52 countries, joining the rallies. Monsanto saw its shares surge by more than 2 percent on Wednesday morning after announcing better-than-expected first quarter earnings earlier that day. The company said that for the quarter ending November 30, 2013 it earned $368 million, or 69 cents per share. One year earlier, the company earned only $339 million during that period, the Associated Press reported. Source: http://www.google.com.au/url?sa=t&rct=j&q=&esrc=s&source=web&cd=1&cad=rj...