Immigration, trade and citizens' rights - an Australian history - response to Bandicoot's Our Rights to Jobs

Bandicoot writes in Our rights to jobs negotiated awayabout how Australian government has signed away the rights of Australians to self-govern on the question of mass immigration, a problem now affecting our employment opportunities and conditions. Indeed, many problems affecting Australians arise from a trend of the late 20th century to conflate trade in goods across borders and trade in people across borders. Goods-imports depress our prices and people-imports depress our wages and conditions, but, even more importantly, they depress our democracy. In the end neither producers nor workers win, unless they are multinational corporates. 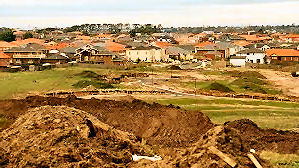 The seeds of the predicament that Bandicoot so ably documents in "Our right to jobs negotiated away" were contained in the multilateral trade agreements that people protested in 1994 when a trendy-sounding Mr Keating signed us up for them. Arguably the Greens and the so called socialists of the Socialist Alliance that field a lot of potential youthful energy for protest, could have led Australians against this had they educated their followers. It seemed then, and seems now, however that the Greens and the Socialist Alliance failed to defend Australians rights on this matter because they have a core that defends immigration against any criticism, for reasons best known to their leaders.

The problems we are now deeply affected by arise from a trend of the late 20th century to conflate trade in goods across borders and trade in people across borders. Goods imports depress our prices and people imports depress our wages and conditions. In the end neither producers nor workers win, unless they are multinational corporates. This is because of an ideology that pretends that all our interests are promoted by economic liberalisation. It is obvious, however, that economic liberalisation (the ability to go to any bank in the world looking for the best rates, the ability to buy any commodity or product from anywhere) does not apply generally to most people. For instance, ordinary Australians cannot go to the Bank of Paris and access better terms for chequebooks and housing loans. Similarly, authors cannot publish with amazon.com and expect their earnings to be paid electronically into their accounts unless they are located in a certain few countries and you cannot usually freely download electronic books and dvds from French Amazon.com because the rights are restricted to certain countries. And you cannot off-shore your personal accounts to tax havens if you are a PAYE employee.

The philosophy of free trade, such as it is, is that ordinary people benefit from the transfer of wealth to international business entities because it may trickle down in the form of employment via these entities or in the form of the very cheap goods that flood our countries to the detriment of local small to medium business. Australia has also almost abolished the notion of property rights for ordinary people; Free trade in property acquisition means that land-prices have become inflated - affecting housing, farming and business rents so that Australians must compete with corporates and wealthy international investors and landlords to buy property where they only competed with each other previously. The same inflationary pressure on land is now acting on water and power because of the ideology of privatisation which is also associated with free marketeering.

The absolute flood of immigrants now taking Australian jobs was not possible until Mr Howard's WorkChoices. Before WorkChoices, it was not generally profitable to import immigrant workers in Australia because our conciliation and arbitration system required any worker in an industry with an award to have the same wages and conditions as his/her fellows. This also applied to foreign workers. So you could not, until very recently, import a worker from overseas and pay them less than Australians and treat them worse.

However our capacity to bargain industrially has been pulled apart in a series of successive damaging attacks on our Conciliation and Arbitration system that was the hallmark of the Australian Federation democratic agreement.

Primeminister Malcolm Fraser set the rot in motion with his laws against Secondary Boycotts which meant that workers could not withhold their labour from industries that behaved badly towards them. This fundamentally altered the human rights of Australian workers in a process that set in motion their degradation.

These were first dismantled at State level, beginning with the Kennett Government in Victoria. Gradually industries were thrown into the disorganised mess of individual workplace agreements, stored in the tangled morass of the federal system. Unions lost rights to represent us at the same time as the laws they used to back us up on were watered down into uselessness.

It was obvious the whole time, to anyone who knew about the trade agreements that outlawed national differences in worker protection among signatories, that this situation would open up the sluice gates on cheap worker immigration in Australia. It was therefore obvious to the people responsible for signing us up with the WTO agreements and for dismanteling our industrial system.

Keating set the scene for the undermining of citizens rights to determine our industrial laws and conditions as well as our rights to set limits on imports and foreign workers at the Marrakesh Agreement Establishing the World Trade Organization 1 in 1994.

1. With respect to market access through the modes of supply identified in Article I, each Member shall accord services and service suppliers of any other Member treatment no less favourable than that provided for under the terms, limitations and conditions agreed and specified in its Schedule.[152]

2. In sectors where market-access commitments are undertaken, the measures which a Member shall not maintain or adopt either on the basis of a regional subdivision or on the basis of its entire territory, unless otherwise specified in its Schedule, are defined as:

(d) limitations on the total number of natural persons that may be employed in a particular service sector or that a service supplier may employ and who are necessary for, and directly related to, the supply of a specific service in the form of numerical quotas or the requirement of an economic needs test;

PART IV, PROGRESSIVE LIBERALIZATION, Article XIX, Negotiation of specific commitments, commits the signatories to continuous relaxing of trade barriers and, presumably, movement of people across national borders and the granting of work permits. Obviously this agreement abrogates the rights of citizens to determine wages and employment conditions which are an intrinsic part of self-government in a democracy and were a notable feature of Australia until this agreement to free trade.

Hawke was also responsible for negotiating - in the Accord, against the background of the post 1970s oil shock, a centralisation of industrial unions that entailed the breaking up of diverse local and state power bases. These changes were probably necessary to weaken the union movement so that there would be no chance of Australians finding purchase to stand and fight against the slippery slide into third world conditions. The corporate model of huge unions had an inbuilt tendency to make unions allies of banks and the wealthy with professionalisation of traditionally voluntary offices, becoming stepping stones for parliamentary opportunists.

Geoffrey Taylor (who writes for candobetter.net) would argue that a corrupted socialist movement in Australia kept up significant unwarranted agitation and confusion within unions so that workers and employers were unnecessarily alienated from their own interests. That is, he would argue that the socialist movement led poorly founded strikes and protests but that it also undermined well-founded protests and strikes - and does to this day. The underlying theory here is that the corrupted socialist movement was actually working for the government and the power elites of the day, and against the very principles that caused so many to pay their dues to it and follow its orders.

Did Fraser, Hawke, Keating, Howard et al all realise the harm their policies would do Australians or were they just caught up in a tsunami of Chicago School economics (called 'shock doctrine' by Naomi Klein) that seemed clever at the time? If there had been no oil shock in the 1970s, I do not think that their ideas would have gained purchase, but that series of shocks and countershocks helped to divide the 'developed world' into two different economic policy schools. Amongst the anglophones, the Thatcher-Reagan view of the world evolved to chisel away at citizenship and democracy in favour of a contractual society where we were all just economic units, in contrast to Western Europe, where a more citizen-focused solidarity created a bulwark for democracy, with smaller economic differences between citizens and a humanist view of one's fellows.

Oil scarcity still looms however and Anglophone elite dominance of world political economy is now magnifying the division between the oil producing economies in the Middle East, Africa, South America and Russia and the massive consumer economies in the West. International banking deregulation has broken down Western Europe's solidarity with its citizens by investing government and personal funds in the USA stock, housing and futures markets, which are totally overcapitalised. These banking and investment institutions that have invested in the United States have created of the United States a monster debt that must be fed to keep its investors alive. To feed that monster, 'austerity measures' now erode the solidarity of citizens and government in Western Europe. In a related pact, The USA, England, Saudi Arabia, France, Germany and others are now aligned temporarily in illegal wars for trade where they are historically competitors.

I know only some parts of the history of Australia's loss of citizens' rights and welcome contributions and criticisms from others.