In this save the birds campaign, Paul Sullivan, the Chief Executive Officer of Birdlife Australia, writes of how frustrated he is that the major parties are just ongoing standing by while birds and other creatures go extinct. He argues (as if it should be necessary) that it would cost very little money to save each threatened species. He does not mention how overpopulation, overdevelopment and agriculture are eating up habitat, but you know... 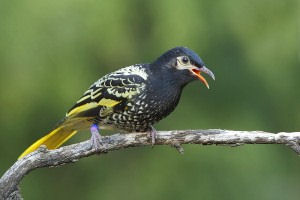 [Does anyone know the name of th pictured bird? It is on the Birdlife Australia website as an endangered species but has no label. Please write in and tell us.]

We’re frustrated. The environment and threatened native species have barely rated a mention in this election. Help us get threatened species firmly on the agenda of the major parties.

Some of the 20 birds listed as critically endangered are at extremely high risk of extinction on the next Australian Government’s watch.

Until now, both major parties have completely ignored the issue.Last week , the Coalition announced that it would fund a Commissioner for Threatened Species if elected in September. Whilst this was a welcome addition to the national conversation, it’s an empty promise unless backed by a strong fiscal commitment to fund individual species recovery programs.

The ALP too, have yet to commit to a fund dedicated to implementing recovery plans.The issue is finally getting some attention.Now we need your help to build on this momentum.

Both of the major parties must step up and make a commitment to funding for threatened species recovery plans. We’re not asking for a big commitment. We estimate it would only cost an average of $380,000 for each of our most endangered bird species. And we know funded recovery plans work – they save birds. BirdLife Australia can only do this with your help. We need you to add your voice to our call. Please sign this petition, get involved and join our campaign to receive regular supporter updates. Please share this note as widely as you can with your friends, family and social media networks. Ask them to get on board and give threatened birds a voice.