Voting for the Stable Population Party

Despite being officially launched in 2010, it's the 7th of September 2013 that will see the real birth of the 'population party'. William Bourke, the leader of the Party, says, "We champion a difficult but critical cause - misunderstood by some, and misrepresented by others. Despite the huge challenges of running a national campaign on a shoestring budget, our grassroots community party has collectively run an honorable and professional campaign. We have much to be proud of." 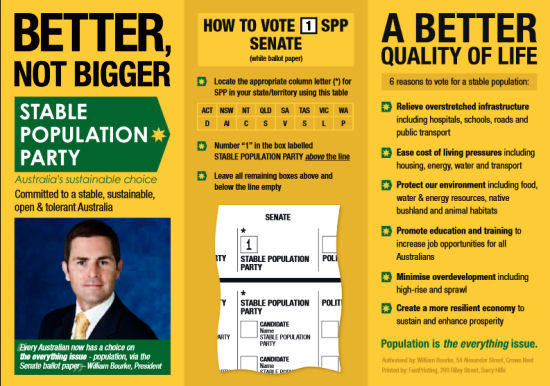 Either they allow the tri-partisan population explosion that's pushing Australia to 40 million people by 2050, or they vote to slow down and stabilise at around 26 million.

Australia has a chance to lead by example on this critical global issue, and to partner and support other nations for our collective benefit.

The Stable Population Party offers a sensible and responsible path that will permit Australians to fulfil their primary and overwhelming moral responsibility - to pass on a sustainable Australia.

Please also forward this article to relevant people in your network (via BCc rather than an open email), to help build awareness for the Stable Population Party, and particularly for the Senate vote in all eight states and territories.

Every single Australian has a choice to Vote [1] Stable Population Party for The Senate.

A sustainable Australia starts with a stable population.

There are three sites which give Australia detailed election results for the election held yesterday on 7 September 2013.

the Tally Room is particularly comprehensive. However it does not yet have results for yesterday's election.