Community against EastWest Tunnel head to ALP conference this weekend 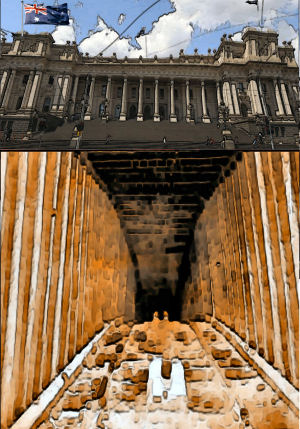 Budget blow to Victoria - East West link should be scrapped

Victoria has been whacked with a $20 billion funding shortfall for its schools and hospitals in the federal budget, which Premier Denis Napthine has described as a “severe blow”.

The total cost to Victoria would be $20 billion over the next decade, and Premier Napthine was angry it came after his government increased funding to hospitals and schools.

If Victoria received the GST it paid the state would be $1.5 billion better off every year and could use the extra money to fill the funding gaps the Abbott government created. Already Victoria's hospitals and schools have suffered from overloading and population pressure, and now they will be worse off - exacerbated by a slash in Federal funding. The rampant rates of population growth our governments boast about, and self-congratulate themselves on, has not brought the promised prosperity, and has increased welfare spending on Newstart due to high rates of unemployment and poverty. Patient demand for public hospital services is increasing, as would be expected given that the population of Melbourne continues to increase by 1,000 each week, and the established population is ageing.

There is no apparent growth in employment opportunities anywhere. Swelling populations together will cuts to hospital funding is a recipe for disaster. Third world rates of population growth ultimately mean third world problems!
With such pressures on costs of living, and service standards, it's madness to continue with the East West link. The public want access to good public transport, education, training, health care, ambulances and health care. The East West link is about caving into the road lobby, not a need.

Australia's power elite don't intend to rescue us from poverty

Thank you for your continuing comments on candobetter.net.

What is really scary is that the governments at all levels are probably well aware that they are juggernauting us into 'third world' overpopulation and impoverishment. They are doing it as an economic strategy to benefit a small number of people who derive income from investment in assets and resources. They are well aware that mass immigration-fed population growth is swamping our hospitals and primary care systems. They understand that the compensation that GPs now receive per patient is insufficient for them to do a proper job.

They do not care that our health services are increasingly dysfunctional. They are obviously making them more and more dysfunctional, whilst throwing money at their own 'class' to build unwanted infrastructure and to prop up banks.

Because 'good people' believe that their governments could not be so cynical, the politically empowered can get away with empty rhetoric about 'fixing' the problems.

The fact that politicians and those employed by them in the public sector continue to market and support this situation as if it were 'economic growth for the good of all' in the face of manifest contradictions is merely part of a filibustering dialogue of the deaf.

The politically empowered manage in this way to engage the energies of people who, whilst aware that there are big problems, just cannot believe that the people in power are as cynical as they are, in utterly wasteful dialogues with mass media and politicians, plus attempts to go through official processes, like the courts.

Then there is a whole layer of young people who derive their incomes from facilitating these corrupt processes - in legal professions, as reporters, as supports for politicians, as doctors and nurses. They do not dare to engage politically for fear of losing their jobs even at the level of writing on blogs or to newspapers. These people cannot afford to dismantle the system that gives them bread and butter.

Then so many other young people are living hand to mouth in substandard accommodation and putting up with severely stressful situations in boring and scammy jobs, bullied from morning to night, supplementing poor wages with the black economy or jumping through ridiculous hoops to get the dole. One can see that we are reaching a point where figures for unemployment will decline as more people resign themselves to surviving through buying and selling illegal drugs, pimping and prostituting, and other forms of crime - in the black economy. This is yet another sign that we are currently going through a very serious social transformation into a deeply divided society like those of the Philippines and South America under the domination of US-NATO imperialism. I know that sounds very dramatic, but it has already happened to so many countries; you would have to be naive to think it was not happening here. However, given our education system, it is more or less inevitable that most people will not understand these processes which have been historically documented for ages. That too is a product of the reduction of a deep education process into a shallow 'skills acquisition' one. Without education in the humanities - philosophy, political science, literature and history - most people have little hope of understanding their predicament. It was the recovery of the classical humanities and sciences that assisted people to rise above religious fundamentalism in the Renaissance. (Although, at the same time, there was a rise in colonialism and the slave trade.)

I admit that we do still have large quantities of people who do desperately try to help their compatriots through charitable and state intervention. How long can this last when every grass-roots organisation is weakened through the exhaustion of activists who must counter debt, high rents, and survive through long working longer hours, with no hope of pensions or respite? Without sufficient 'leisure' people cannot usefully engage politically or educate themselves beyond mere [transient] commercial 'vocation'.

Don't think that I have given up, but I know that this battle is much harder than it appears to people when they first start out.

It is certainly important for us to maintain sound knowledge bases on the internet as part of our combat against rising global feudalism and the transformation of citizens into 'customers' and indentured servants.

As Joseph Tainter concludes, in The Collapse of Complex Societies, it seems that eventually people break away from repressive and corrupt governments simply by going around them, building their own informal [black and/or cooperative] economies.

It is ironic that we all try to defend our rights as citizens of nations when those nations themselves were bitterly resisted by more localised powers. See Benedict Anderson's Imagined Communites, Reflections on the Origin and Spread of Nationalism. But citizens of nations, if they have a code, as do the European nations (the code began in France and was a product of the revolution, even though it was Napoleon who had it written down) have rights and institutions to defend those rights.

Globalisation is a terrifying force. Bitcoin may be a part of the solution. I am trying to understand it. Here is an interview on the subject with Roger Ver, Bitcoin entrepreneur.

Once again, thank you for continuing to contribute.

Is opting out still an option?

Back in the 70s and 80s people used to opt out of society becoming hippies in places like Nimbin. This was a real alternative in Australia if you could acquire or rent some land, achieve some self sufficiency in food and not participate in the consumer society. I wonder if this is till possible. I have a terrble feeling that somehow you would still get caught in the net of capitalism when you open the envelope and read the letter telling you that your land, planted with this winter's food was required for fracking for coal seam gas. There goes your peace and quiet, there goes your self sufficiency!