It is believed that up until two weeks post election 457 visa workers from Spain and their families were still arriving to work on East West Link. However the latest news is that the Authority behind the East West Link is being disbanded by the Andrews Government. There are, however, still many issues left over from the Napthine Government and East West Link that need to be carefully monitored in the area of environment, democracy and heritage. 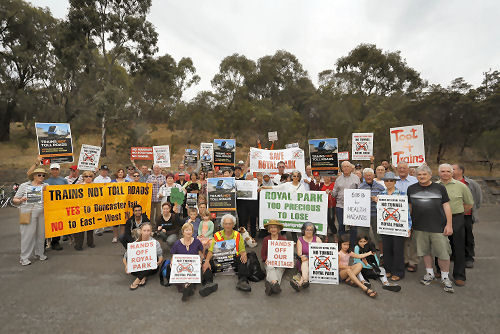 East West Link News: The good news received yesterday is that Linking Melbourne Authority responsible for the East West Link is being disbanded by the Andrews Government."Authority behind the East West Link ditched" by Clay Lucas. http://www.theage.com.au/victoria/authority-behind-east-west-link-ditched-20150107-12jg0e.html

This spells the demise of this monster project which would have been an environmental, social and economic disaster for the State. Many seem to be in a state of disbelief at the news. Few have been commending the Andrews Government for the action taken to wind up the East West Link. In our view its a bigger win than the Franklin Dam victory.

One activist has asked "Now just what are we all gonna do with ourselves this year? " There is plenty still to do re East West Link and other issues. And any win is temporary, any loss permanent as David Suzuki has commented, so eternal vigilance is the order of the day:

Priority Issues Re Winding Up the East West Link :

1 Royal Park Heritage The former Planning Minister, Matthew Guy, included the Royal Park on the State Heritage Register but spelt out exemptions to allow the East West Link to be routed through the Park, thus - in our view - negating its heritage standing! Our organisation and the Royal Park Protection Group Inc. sought legal advice and were advised that this matter could be referred to the Supreme Court but the cost precluded us from proceeding. We hope to raise this issue with the Acting Planning Minister. We have raised it already with the Director of Heritage Victoria.

2 Status of New Sports Facilities in Royal and Princes Parks. As you might be aware the City of Melbourne received funding of up to $14 million to fast track development of sports facilities in Royal Park and Princes Park to compensate for the forecast loss of sporting facilities on the Ross Straw Field in Royal Park with the construction of the East West Link. We have been extremely alarmed over the loss of open parkland for passive recreation and informal sports and the addition of light towers to the Flemington Road sports ground next to the Royal Children's Hospital and in Princes Park. As far as we know, a memorandum of understanding between Linking Melbourne Authority and the City of Melbourne was signed but given LMA is being wound up and that the East West Link will not proceed, is this agreement still valid? We are fighting the installation of sports lighting. The light spill and the towers themselves would have a detrimental impact on the environment, on cultural landscapes, on heritage and residential amenity.

3 Zoo's Territorial Ambitions to expand its Parking in Royal Park. As you may be aware the Zoo had negotiated secretly with Linking Melbourne Authority to alienate a great slab of Royal Park after construction of the East West Link was completed for its parking. We propose to pursue this question with Zoo management to promote public transport and alternative forms of transport to the Zoo. This has already been raised with the Zoo Director.

4 Immigration of 457 Workers to Work on East West Link. Rumour abounds that as late as two weeks after the election workers from Spain and their families were still arriving under 457 visas to work for the East West Connect consortium on the East West Link. If any one has information on this subject can you let me know? Meantime see photo taken in Royal Park by Age photographer Paul Jeffers of the East West Link opponents grouped on the very spot that the tunnel was to emerge into Royal Park Park on the Ross Straw Field. Work was to start on this spot in January until the Andrews Government called a halt to the project. (See photo in Clay Lucas' article)

5 Supreme Court Cases re East West Link. Don't think we have forgotten the stand that Councils plus Tony Murphy took over the East West Link. We have yet to hear when the cases of Yarra and Moreland Council and Moonee Valley Council will be heard. It would be great to get a comment on the final decision on the Tony Murphy case in the Supreme Court.

Please consider inputting to the poll at the end of the article:

Seems like a pretty good outcome to me, although one would have hoped that the Liberal Party responsibles for contracting when the did should go to trial under some law. Should their party not be sued for this amount?

I am glad that the Victorian Government kept its word on this. Pity that Steve Bracks did not keep his word on the promise of an airport train.