Why are there so many displaced people? Because US/NATO is destroying their economies and sponsoring terror

Below is a quote from Obama before he became president, counselling a completely opposite foreign policy to the warmongering one he now heads.[1] He calls for cooperation with Russia, a vigorous enforcement of nuclear non-proliferation, shutting down of the financial networks that support terrorism, pressure on the Saudis and Egyptians to stop oppressing their own people, and for an energy policy alternative to Big Oil's. Addressing the Bush government of eight years ago, he recognised the inflammatory and unfair process set in train by the United States in the Middle East. Yet now he pursues the same policy even more aggressively and dishonestly than Bush. He effectively heads a global coalition of war-criminals. Australia is a stooge in that coalition and so is the ABC, CBC, BBC, European Press, notably French mainstream press, and the Murdoch and Fairfax Press in Australia. Currently their greatest war-crime is to fail to reveal that President Bashar al-Assad is not an 'unelected dictator' but won overwhelmingly in a fair election in 2014 and currently offers protection to his people, but the Western allies and their corrupt Middle Eastern stooges - Saudi Arabia, Qatar and Turkey - are driving the exodus from the Middle East by sponsoring terror-militia. 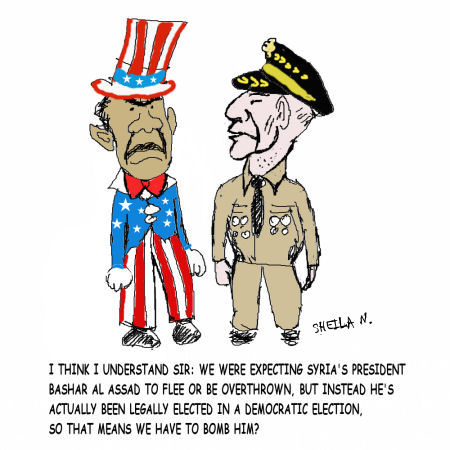 Why are there so many displaced people? Perhaps somebody wanted a fight

"So for those of us who seek a more just and secure world for our children, let us send a clear message to the president today. You want a fight, President Bush? Let's finish the fight with bin Laden and al-Qaida, through effective, coordinated intelligence, and a shutting down of the financial networks that support terrorism, and
a homeland security program that involves more than color-coded warnings.

"Let's fight to make sure that the U.N. inspectors can do their work, and that we vigorously enforce a non-proliferation treaty, and that former enemies and current allies like Russia safeguard and ultimately eliminate their stores of nuclear material, and that nations like Pakistan and India never use the terrible weapons already in their possession, and that the arms merchants in our own country stop feeding the countless wars that rage across the globe.

"Let's fight to make sure our so-called allies in the Middle East, the Saudis and the Egyptians, stop oppressing their own people, and suppressing dissent, and tolerating corruption and inequality, and mismanaging their economies so that their youth grow up without education, without prospects, without hope, the ready recruits of terrorist cells.

You want a fight, President Bush?

Let's fight to wean ourselves off Middle East oil, through an energy policy that doesn't simply serve the interests of Exxon and Mobil." (Excerpt from speech delivered by Sen. Barack Obama delivered in Chicago on Oct. 2, 2002.)

[1] http://www.democraticunderground.com/discuss/duboard.php?az=view_all&address=433x33800 This speech is cited in many places and recently discussed in a new book, Lloyd Gardner, Killing Machine: The American Presidency in the Age of Drone Warfare.

Opening Europe's borders to refugees will not end Syrian crisis

On 18 April 2015, before the current refugee crisis began, the Iranian PressTV News service reported that "Syrian Prime Minister Wael al-Halqi has called on the Syrians forced to flee to neighbouring countries due to the ongoing conflict in the Arab country to return home."

"He said Syria is home to all Syrians and that the government is ready to embrace all the displaced citizens and provide decent residence to them. Earlier this month, the UN Refugee Agency warned about the dire situation of the Syrian refugees abroad especially in Jordan, saying the Syrian exiles are facing recruitment as child soldiers, sexual violence, and exploitation for labour. The report released by the UN High Commissioner for Refugees (UNHCR) on August 6 said a large number of child refugees are deprived of schooling and vulnerable to be recruited by armed groups that aim to take them back to fight in Syria. The world body noted that the threat is not limited to children and adults are also prey to such recruitment, while all refugees, including youngsters, are being forced into labour. The UNHCR also warned about domestic and sexual violence as a particular danger for refugee women and children. The report said both organized crime networks and Syrian opposition groups operate in camps in order to pursue their financial and political objectives. It further warned that lawlessness and high criminality in the camps are driving refugees back home."

Since then hundreds have drowned on crowded ships in the Mediterranean and more than 71 have perished inside trucks in Austria. In response hundreds of pro-refugee activists have protested in Germany and Austria to demand their governments admit more refugees. Strangely, as far as I can tell, none of those ostensible humanitarians protesting for Syrian refugees have expressed any opposition to the current war against Syria.

Many other ordinary Europeans are rightly concerned at the prospect of hundreds of thousands more refugees and economic migrants settling in their country. So, demonstrations against the offering of asylum to large numbers of refugees have also occurred. The participation in these protests of far-right-wingers and even neo-Nazis has been used by pro-refugee activists and the mainstream newsmedia to discredit those protests.

Fleeing from danger, refugees cannot help solve Syria's crisis. It can only make it all the more difficult for those Syrians remaining behind to defend their country. Inevitably, by fleeing to the very countries whose governments are openly complicit in the war against Syria, including France and Great Britain, the Western mainstream newsmedia will spin the flight of so many refugees to reinforce their narrative that the Syrian government is a brutal dictatorship thereby providing more justification for their ongoing proxy terrorist war against Syria or even direct military aggression as, for example, Australian Prime Minister Tony Abbott indicated he was willing to do by conducting Air raids into Syria, ostensibly to bomb ISIS.

The inevitable chaos caused by such large influxes will make it easier for the elites of those countries to continue to rule against the best interests of the majority of these countries' inhabitants. This would included the conducting of further wars against people in the Middle East, Eastern Europe, Africa and Asia.

Little of the coverage, even from normally truthful and informative alternative newsmedia sources, is of much use. Nearly all try to pull at the heartstrings of readers in order to persuade them to support the right of refugees to enter Europe without proposing any workable solution to the crisis.

The small number of articles which address the real issues at stake include: The Migrants' "Long March" across the Balkans to Western Europe (31/8/15) | Global Research/Oriental Review, Western-made refugee crisis (1/9/15) | RT - CrossTalk,