Researchers have discovered microfossils resembling fungi in lavas that erupted on the seafloor 2.4 billion years ago, representing the oldest evidence of fungal life.

The new paper, published in Nature Ecology and Evolution today, suggests that fungi not only emerged much earlier than suspected but also evolved beneath the sea rather than on land.

Until now, the fossil evidence for cavity-dwelling fungi only extended back 46 million years, but the new discovery potentially extends that record by 2400 million years. 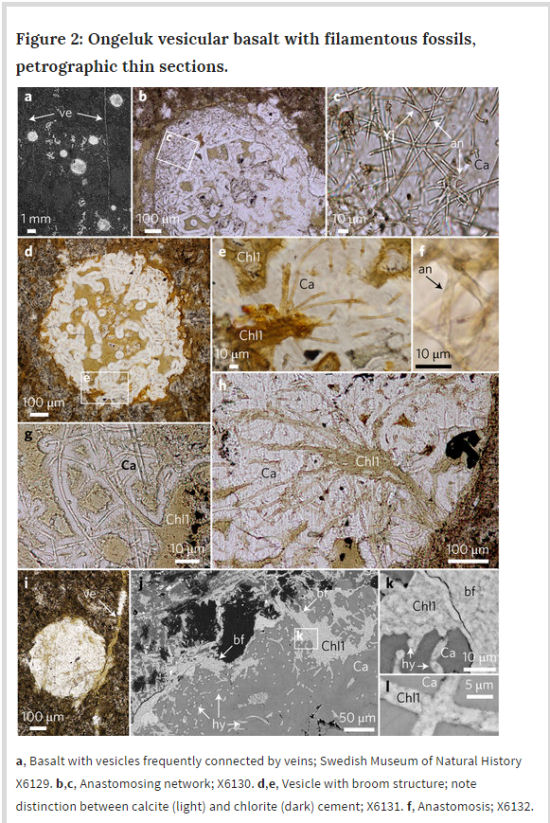 Professor Birger Rasmussen, from the WA School of Mines, Curtin University, said he found the microfossils during a routine microscopic study of the lava.

“I was looking for minerals to date the age of the rock when my attention was drawn to a series of vesicles and when I increased the magnification of the microscope I was startled to find what appeared tobe exquisitely preserved fossilised microbes,” Professor Rasmussen said.

“It quickly became apparent that cavities within the volcanic rocks were once crawling with life.

“We hope this research will help to answer fundamental questions about the evolution of life on our planet and beyond.”

The research aims to help identify targets in the search for life on rocky planets in the Solar System, including Mars, where vesicular basalts have been previously identified.

Co-author Dr Janet Muhling, also from Curtin University, said the team is currently searching the ancient volcanic rock record for microfossils to construct a more complete picture of life in the deep biosphere on early Earth.

“The discovery of well-preserved microfossils in 2.4 billion year-old vesicular basalts is exciting because it opens up the possibility that microfossils may exist in even older volcanic rocks than previously thought,” Dr Muhling said.

The paper was co-authored by researchers from the Swedish Museum of Natural History in Stockholm.

The full research paper, Fungus-like mycelial fossils in 2.4 billion-year-old vesicular basalt, can be found at: http://www.nature.com/natecolevol/

Mackenzie Kwak is a parasitologist with a research focus on the systematics, ecology and biogeography of ectoparasites, chiefly ticks (Ixodidae) and fleas. He'll be talking about ticks.

SPIFFA Meetings are held in Rosebud on the first Monday of the month. Speakers begin their presentation (around an hour) at 7:30pm, followed by refreshments of the cake variety, before meeting business gets underway. The talks are usually of a high scientific standard as well as entertaining.