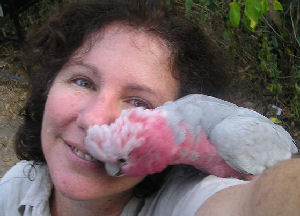 "Michael Crichton spoke of environmentalists requiring a belief in an unspoiled 'Eden' that existed before we corrupted it and will again exist once we have had our comeuppance. My thought is that the belief that Aboriginals were noble eco-savages falls into this same category. The Platonic need to believe in perfection." Tim Murray

Whilst I am a great fan of Tim Murray's, I feel the topic and the opinions expressed need further investigation.

Tim Murray's article, The Record of Indigenous North Americans raises the issue of whether non-capitalistic or less complex cultures were as unethical or worse than modern industrial societies. Since the initiator of the debate, Tim Murray, hails from Anglo-Canada and talks about North American Indians, I will proceed as if we are mainly talking here about Anglo-capitalism. I don't want to be accused of cultural-cringing because of my own precision of 'Anglo' capitalism, so I will precise here that the system of capitalism and industrial society originated in England and colonised itself most typically in the English-speaking settler societies like the US, Canada, New Zealand, Australia and, I think, South Africa. Other capitalisms have different relationships with fossil fuels, democracy, and land-inheritance systems. They incorporate other organisational, economic, social and political blends, although industrialisation is heavily affected everywhere by Anglo-capitalism.

I think that the imbalance of romanticism almost entirely favours fossil-fuel based Anglo-capitalism. I agree with Michael Creighton about environmentalism as a religion in that, clearly, some environmentalism is religious. Corporations, spin-doctors, the mainstream media and advertising (the latter three being parts of the same thing) rely on this uncritical faith by the public in symbols and banners. Religious environmentalism ritualises and promotes 'environmental values' in the same way religions push various other ethical values, without the rituals having much if any practical application to Energy returned on energy invested (EROEI) and preserving biodiversity, any more than a politician's or Corporate CEO's swallowing wine-soaked bread from a priest (taking of the Eucharist) necessarily affects their real-life conduct of business.

The same religious approach is often present in defenses of the superiority of industrial society and of what passes for democracy in Anglo-capitalist societies. I would also say that people believe naively in the value of their governments in the way that children believe that their parents are essentially good and loving even when they are cruel, dishonest, niggardly and abusive. To seriously challenge the idea that your country's leader ultimately has your country's welfare at heart, upon which your welfare utterly depends, is in practice as unlikely as a pre-schooler losing faith in his mother or a priest losing faith in the God the Father. Although it does happen, populations have to be pushed to the limit and to have little left to lose before they seriously challenge outrageous governments. The tendency is for the worshipper to seek in themselves the explanation for bad behaviour in a leader, a parent, or a deity. The first person the doubter approaches is the parent or the priest, who reinforce the dogma of course. In Australia the tendency is to write to one's member of parliament or to the editor of a mainstream newspaper - with predictable results. The last person we tend to rely on for verification is ourself. 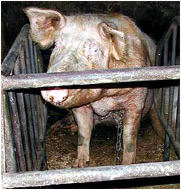 Anglo-capitalism is a system born of dispossession and one which has industrialised cruelty to humans and animals on a massive, constantly worsening scale. (See Ellen Meiksins Wood, The Origin of Capitalism, a longer view, Verso, London and New York, 2002 and Christopher D. Cook, Diet for a dead planet

There is abundant evidence of steady-state hunter gatherer and herding cultures lasting many hundred and even thousands of years. They had to get along with the other species in their environment because they depended upon them for survival; they could not afford to to damage or scare them all away. Those cultures which did break their environments also broke, died back, and often did not survive. The societies which survived for long periods got it right.

Only if we equate material abundance - an accident of fossil-fuels permitting complex technology, starting in England and producing ghastly inequities and sufferings there which then were globalised and continue to burgeon - with some kind of evolutionary progress of the species (which I find an absurdity) - could we pretend that the amount of waste and destruction in our culture was justified. That is, however, a widely held belief, marketed as an excuse for grossly interfering with peoples' rights in non-industrialised countries.

My view is by no means some kind of cultural cringe about what was imposed on my ancestors; it is a political view I have formed through the experience of testing Anglo-capitalist associated democracy and trying to make the system live up to the values that Tim believes it embodies. The capitalist Western Culture simply doesn't actually follow through on the democratic and kindness values that it markets itself under. The only reason a shrinking proportion of those under its sway still believe that it does is because they have not tested those values and because they happen to remain a part of the shrinking circle of beneficiaries. There are many countries out there which are actively revolting at the cost they bear for provisioning Western capitalist culture Inc.

This comment is also not some kind of defense of communism or socialism, which, as far as I can see, had their roots in an opposition to capitalism and classically attempt to operate on the same dehumanising scale. It looks as if Western capitalism is now going the same way as Soviet communism, but now Russian capitalism is on the rise - and for one reason only - fossil fuel possessions. As Western fossil-fuel sources deplete, Russian and ex-Soviet sources are still comparatively well stocked.

I think there is a conflict in the anti-population movement between those who have not sufficiently explored the fossil-fuel connection between wealth, technology and mass propaganda and those who look at thermodynamic underpinnings of culture and social systems.

With regard to Michael Creighton (a favourite author of mine) and his comments about the Eden myth and popular romanticism of less complex cultures, my own opinion is that Creighton romanticises his own complex culture. I think he has bought the commercial myth that all our ancestors laboured in misery and cruelty until the industrial revolution brought them out of their torment. That's the myth of Industrial Eden. I look forward to Creighton writing a new science-based novel on the role of fossil-fuel reserves on capitalism and the relationship or non-relationship of capitalism with democracy.

By the way, Creighton's ideas for strengthening and depoliticising the funding of scientific research are very interesting. Take a look here.

I would be interested to see Tim Murray look into his Icelandic origins to find out more about the traditions of kindness, responsibility, altruism and friendships with animals there. As I have probably made clear, I think that capitalism simply stole kindly ethics from herding and other cultures and now wears those ethics like a false badge.

Our 10,000 year misunderstanding of soil, energy and population