Video: The Abduction of Assange & the Assault on Press Freedom

If you have any interest in Assange's case, you must watch this video. Press tv Iran journalist, Marzieh Hashemi, has really put together a definitive summary of how justice has been turned on its head by what has been done to Assange. She hits the nail on the head by calling his imprisonment by Britain - for no crime - abduction. The only criticism I would have is that, as well as calling Assange a journalist, she calls him a whistleblower, which is not technically correct.  Her two interviewees are Dr Deepa Govindarajan Driver and CIA whistleblower, John Kiriakou. Dr Driver is interviewed first and, towards the end of her interview, she talks about remaining options to challenge UK legal treatment of Assange so far. John Kiriakou describes his experiences as a whistleblower - what it cost him financially to defend his case, and how it cost him employment, family and friendship.

I have linked the illustration to the page where the video is embedded at https://www.presstv.ir/Detail/2022/07/18/685807/The-Abduction-Assange-Assault-on-Press-Freedom 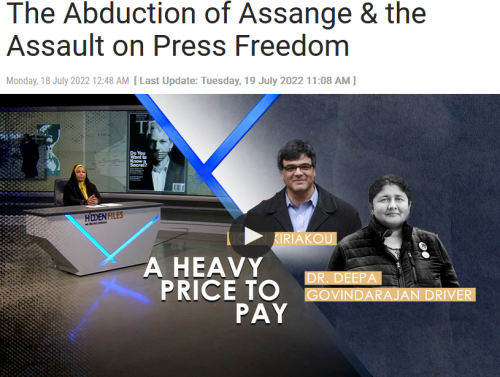 The text below is from Marzieh Hashemi's written intro to the program:

"For Americans, the US invasion of Iraq was set like an elaborate game. US forces were to bravely buckle up and eliminate the enemies of democracy in Iraq. Propaganda was pouring in from all sides about Iraqs Weapons of Mass destruction and more.

And Americans were encouraged to cheer on the forces as we joined them in spirit, thousands of miles away in nearly everything we did, even in the games we played. Games such as the Iraqi Most-Wanted card game which was promoted back then in 2003. These cards were officially named personality identification playing cards and had on them the pictures of the Iraqi regime officials that the US military was aiming to heroically eliminate.

Of course, as those of us familiar with politics and propaganda could already predict, years later, it was discovered that not only was Iraq void of WMDs but in reality, it was the American forces who were a threat to Iraqis, not the other way around! Then we read on secret American prisons and all kinds of unbelievable torture methods.

And so, as a result of these crimes, a person continues to serve time in prison. Strangely enough, that person is not any of those who initiated the offensive on Iraq. Instead, hes the man behind exposing American crimes in places like Iraq and Afghanistan and Guantanamo Bay: A whistleblower called Julian Assange."