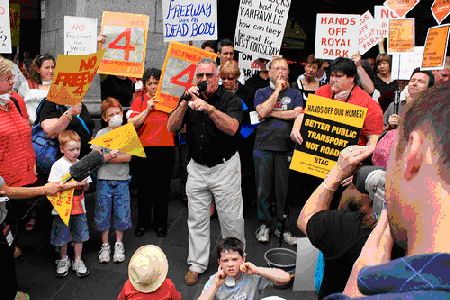 State wide Freight Conference attended by Royal Park Protection Group (RPPG) and Protectors of Public Lands Victoria (PPLVIC) representatives at which RPPG asked a question of Victorian Minister Tim Pallas re the wisdom of spending $9 billion on road tunnels instead of rail freight.

Julianne Bell and Dr Barry Clark met Dr Jenny Grey, Director of Melbourne Zoo, to warn of the threat to the Zoo animals if the proposals to construct a tunnel next to the Zoo in Royal Park proceed as planned in the Eddington Review and to request that she make representations to her Minister. Barry also raised our continuing concern about the adverse impact on Zoo animals of the effects of light at night. Two thirds of the Zoo is illuminated at night by light spill from the State Netball and Hockey Centre hockey fields light towers. Bell raised the issue of the new inappropriate supermarket-style carpark at the Zoo’s north entrance. It was opposed and lost by RPPG at VCAT.

Saturday 15 November 2008: Walk Against Warming: Numbers of anti tunnel/pro public transport campaigners took part in the Annual Walk against Warming, a protest against climate change and need for action. YCAT and RPPG attended with “No Tunnels" banners and placards. It was disappointing that we were not warned that the Myers Christmas parade had blocked off most of the city and many did not get to the event.

Tuesday 18 November 2008: Meet the Candidates for Melbourne Council Election: The North and West Melbourne Association held a meet the candidates’ forum which gave us the opportunity to quiz them on their position re Eddington’s road tunnels. All except Robert Doyle’s team were unequivocally opposed to the tunnel. In view of the fact that Lord Mayor John So sacked virtually all the Parks and Gardens staff as a cost saving measure, I asked would candidates guarantee that proper staffing levels be restored to save our parks?

Their first action was to organise a rally held under The Clocks at Flinders Street Station on Sunday 26 October 2008 with the theme "Sustainable Public Transport – No more Road Tunnels or Freeways”. The rally was a great success with more than 600 attending. Among a great diversity of participants were many young people. TV coverage was good.

Julianne Bell spoke for RPPG and read out messages of support from about 25 groups from Protectors of Public Lands Victoria Inc. (See YCAT website for reports and photos.)

After the ralley CTAG met and reviewed objectives. The following “pledge” was renewed:

“That this meeting reaffirms that CTAG supports sustainable, equitable and accessible public transport and remains opposed to the proposals under the Eddington Report for construction of road tunnels and elevated tollways in Melbourne. Additionally, we consider that there should be no negotiations entered into with the State or Federal Governments over the Eddington project.”

Premier Brumby says he will unveil the Melbourne Transport Plan in mid December 2008 (it was to be November.)

Incredibly, in the face of community opposition and despite the financial downturn and uncertainty of federal funding, the State Government may press ahead with the Eddington tunnel projects.

Mr Peter Mc Mullin, a Lord Mayoral candidate in the Melbourne Council election, when answering a Herald Sun online question as to whether he opposed The Tunnel said :… “if the state government's response to the Eddington Report is to accept the recommendation regarding the tunnel, I will vigorously protect JJ Holland Park from being a staging ground or exit point. Parks like JJ Holland Park are an indispensable community asset and must be protected at all costs. If there has to be an exit in that area, I would advocate for it to be via Paddy's Brickworks in Kensington Rd.” This is all news to “Paddy” who doesn’t know that a tunnel might be coming through his brickworks! Watch our lips Mr Mc Mullin and Council candidates - NO TUNNELS!