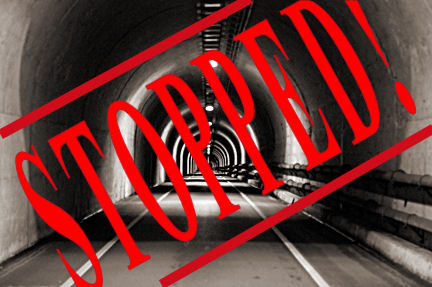 Today (8 September 2008) Premier John Brumby unveiled his ominous Victorian Transport Plan in a briefing at Federation Square before an audience of transport heavies.

The Plan no longer includes, however, the proposal encoded in Recommendation 4 of Sir Rod Eddington’s Investing in transport - East West Link Needs Assessment of March 2008.

This proposal, which lies at the very core of his Review, read “Planning work should commence on the staged construction of a new 18 kilometre cross-city road connection, extending from the western suburbs to the Eastern Freeway.”

Concerned people in Melbourne understand that this “cross city road connection" referred to road-tunnels planned for inner Melbourne, to transect Royal and Holland Parks and the Newell Wetlands; and to traverse Sunshine and Footscray in the Western suburbs along elevated roadways.

The East West Tunnel has done a disappearing act

To the citizens of Melbourne's great relief, the East West Tunnel has done a disappearing act!

Rod Quantock, Actor and Activist, and Deputy Convenor of the Royal Park Protection Group Inc. (RPPG) stated that his group interpreted the deletion of the East West road tunnel and freeway from the Brumby Victorian Transport Plan, as "a win for commonsense and the common people."

Quantock described how the groundswell of opposition has grown from June and July this year. It was around that time that councils in the path of road tunnels and toll-ways - Brimbank, Melbourne, Moonee Valley and Yarra Councils - voted unanimously “No Tunnels,” in the face of massive community outrage.

Grass-roots opposition and the dramatic decline of the Labor vote

Convenor Quantock said that there was a general feeling that:

"Grass roots opposition, the dramatic decline of the Labor vote in recent local government elections and the threat to sitting State and Federal Labor Members of Parliament may well have helped persuade the Government against including Sir Rod’s tunnels and freeways in today’s Transport Plan.”

Julianne Bell, Convenor of Royal Park Protection Group (RPPG), told how RPPG has been at the forefront of opposition to destruction of our parks, our local neighbourhoods and heritage streetscapes by the retrograde, ill-conceived transport plans of the Brumby Government.

The long war for democracy and public space is ongoing

"We have campaigned for 10 years against the expansion of the Eastern Freeway through Royal Park and, during this year, against the onslaught of the Eddington road tunnels. We are grateful that Royal Park, with its open bushland and wetlands, has seen a reprieve from what could have been almost fatal destruction at the hands of bulldozer drivers working on the tunnels.

"The Zoo animals can breathe easy now that a tunnel won’t be constructed next to their home. The State Netball and Hockey Centre can rest assured that games won’t be disturbed by the blasting next door in underground tunnels."

She warned, however, that no-one can afford to relax for long in the current frantic climate of incessant construction. Miss Bell explained:

"The Brumby Government continues to pay lip service to the philosophy of sustainability but appears intent on destroying the urban environment with incremental expansion of roads."

Patrick White, [the great Australian novelist, and author of Voss], sagely observed in 1972 when addressing a rally in Centennial Park, Sydney:

“Parkland is valuable and greedy eyes see the money in it. So you must always be on the alert. Hang onto your breathing spaces in this developing and already over congested city. Protect your parks from the pressure of political concrete.”

Julianne Bell says that RPPG will continue to campaign for sustainable public transport and will be eternally vigilant about proposals by any Government, no matter what colour or persuasion, to build more freeways or tollways through inner Melbourne.