In Melbourne last Saturday nine public housing towers with 3,000 residents were shut down for at least five days, due to a large cluster of identified cases of COVID-19 within their walls. Since then, of course, the whole of Melbourne has been locked down for about six weeks. And this is a Melbourne burgeoning with high-rises. It seems a lifetime ago, but it is only about five months since the cruise ship, Diamond Princess, with identified cases of COVID-19 was unable to disembark in Yokohama, Japan. Her hapless passengers were confined to their cabins, in an attempt to prevent the spread of the virus aboard the ship and on land. Predictably however, the virus spread through the ship and by early March there were six casualties. 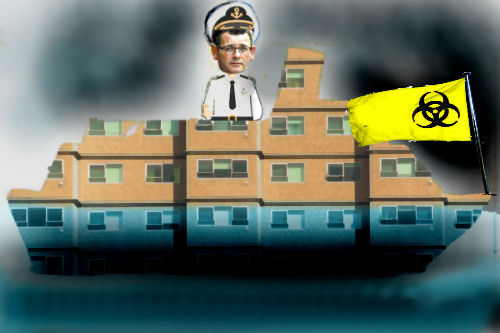 Those of us who see the downside of "storing" people in high-rise buildings and advocate against this trend in Australia, immediately saw high rise towers as vertical cruise ships. This obvious comparison has become a widespread notion, and many of us are trembling observers of this latest selective lock-down of the towers in North Melbourne and Flemington.

It is difficult to conceive of what the Victorian Government could have done differently in the situation and constructive criticism is equally difficult.

It is, however, easy to criticise the rapid trend towards increasing living density, both in Australian cities, and in most of the world. Beginning with the extreme: high rise, such as the public housing tower blocks, which have been there for many decades, but are being replicated in form all over our cities - this is not a sustainable way of living for humans. It is suitable for a few nights in a hotel when visiting a large capital city, but as a long term arrangement it is anathema to what most humans need. People may choose to live in an apartment out of economic necessity. In some cases, apartment-living may be seen as convenient and labour efficient for the resident, not requiring maintenance of gardens and fences, for instance. It is also secure for those who travel a lot. These reasons make sense for the solo person making his/her way, in a globalised business world, for example, but for those less peripatetic in their work habits, the advantages over a house and garden are dubious.

The COVID-19 crisis has, over the last few months,brought the problems of apartment-living into sharp focus, particularly with this latest lock-down.

COVID-19 has thrown us all back on our own resources in 2020, and those with more resources have suffered less. People who have gardens are in a better position than those who do not, because they can be outside, yet remain safe from infection by others. At present, people in Victoria, including people in apartments, cannot easily travel outside that state. Many of us are yearning to exchange winter in Melbourne for two weeks near the beach in Queensland, or even the milder climate of southern New South Wales, options that were so available to us before the current health crisis. But these are minor frustrations compared with the constraints under which the residents of the public housing towers are being held right now.

For years, some of us have seen the undesirability of normalising high-rise living in Australia's large cities, and we noted the helplessness of people in towers in the face of dangers like flammable cladding, or major plumbing issues that required evacuation. This is not to say that a house cannot catch fire or flood due to a plumbing problem, but the impacts of such crises are massively multiplied in towers with hundreds of residents, where the effects of being locked in or out are very serious. Residents in towers are at the mercy of the buildings' private or government owners. The high rise arrangement may be workable when all the complex functions of a large city are operational, but this cannot be guaranteed.

Population growth, engineered by governments and planners, is hypocritically given by them as an excuse for the transition in Australia's capital cities, especially Melbourne and Sydney, to ever increasing density. Increased population within a given area does not serve us well. It advantages those who make money from high volume sales - from the sandwich bar near a block of offices, with an imperative to meet its high rent, to those who own our toll roads and transport systems. Surely, we, as a society, have to admit defeat with respect to the notion of ongoing high volume being the commercial panacea for all transactions? We cannot "socially distance" in a crowded restaurant, in a capacity crowd at a football stadium, cinema, orchestral concert, ballet or theatre. Fortunately for the toll road owners, heavy traffic is not an immediate COVID-19 health risk, but if our roads are the only place we can now gather then one might hesitate to call the resulting human accumulation in cities any sort of society.

The problems encountered in tower blocks in recent years are the indicators that we have hit the wall with respect to density of human habitation. We have had several warnings with the current one being loud and clear. Wrong way! Go back, or at least go in a different direction!