Allowing couples to take $40,000 from super would send property prices skyrocketing in all state capitals, but the impact would be most severe in Sydney, where the median property price could lift a staggering $134,000. (see table 1 below) 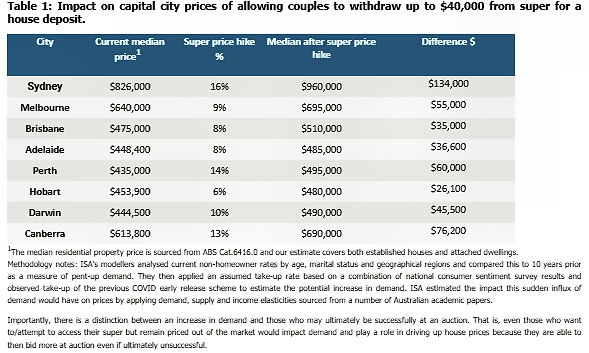 In most areas the price increases and extra property taxes would quickly surpass the amount of super a first home buyer could withdraw, so homebuyers would be paying more but at the expense of their super. In all cities but Hobart if a couple took out $40,000 from their super, nearly all would be lost through the price hikes the increased demand would fuel, in Sydney prices would spike by three times that amount.

The market would react quickly to the scheme becoming a reality, within a year the full price increases would likely be realised.

Many potential buyers would soon be locked out of the supercharged market, others would be lumped with far bigger mortgages – and would hit retirement with little savings and only the pension to rely on.