It's interesting how so many sentences and ideas now trail off into the inevitable denouement "… but that didn't happen because of Covid"…"We had to change plans because of Covid." It's as though Sir Humphrey Covid is some VIP, for whom doors must be opened and the seas must part. Or, as though Covid is an unexpected first born baby to a couple in their 40s whose lives are now utterly transformed. "We couldn't celebrate Henry's birthday this year because of … Baby Covid." "Covid" could be anything or anyone terribly important - one's mother in law arriving from Europe or a visitation from a long dead relative. All must stop … for Covid! 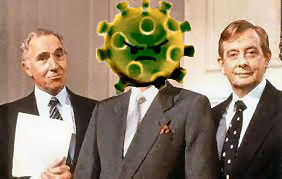 One of my friends refuses to name this interloper, usually spoken of with such reverence. This seems an excellent way of handling the situation!

Sir Humphrey is noted more for what he prevents, rather than what he facilitates or mandates. Think of the thousands of people who have not attended football matches they otherwise would have flocked to, and further ,who have not caught planes, boarded cruise ships for exotic ports, nor played bingo in the ornate lounges of the oversized ships. Think of all the three-course breakfasts that have not been eaten in the multitudinous choice of ship and hotel dining rooms all over the world! Sir Humphrey has put a decisive stop to these hedonistic activities.

Millions of people have not attended work for months, because of one entity, already named and and derisively "knighted."

All these aforementioned effects are from the point of view of us "ordinary people." It is our friends and relatives plans that have given way to COVID-19. But what about if we look further out to decisions beyond our sphere of influence ? It seems that "Sir Humphrey" has affected activities on a much greater scale.

Even chronic wage depression, and endemic high rates of unemployment, will stop. These, associated with globalised out-sourcing, must stop for Covid. These, which blew out further after the Kennet-led destruction of state awards and John Howard’s new use of the Corporation clause in the Constitution, with a new stream of cheap immigrant labour (see above) - must stop for Covid. So we are now looking at the first increases in employment rates and wages prospects, for decades.

It has been hard, according to Australian farmers, to find fruit-pickers, since the highly exploitable backpacker stream dried up with Sir Humphrey Covid. See [Fruit Picking Jobs Australia]. However, Australians complain that they are often rejected when they apply to work. In fact a lot of Australians are working in the industry, now the farmers don’t have a choice to exploit disoriented young migrants. See, ”Thousands of unemployed Australians do go for fruit-picking”. Of course, if there are not enough Australians to pick the fruit for low wages, the fruit growers could get together and raise their prices. For this to be viable, Australia would have to stop importing fruit from countries with endemic slave labour, and Australians would have to buy fruit by the piece, rather than in large quantities that often are not eaten and go bad in the bowl. Low carb dieters and Dr Lustig (see, for instance, “Fat Chance Fructose 2.0: https://www.youtube.com/watch?v=P3WkXJokBAU), would all say that we have been encouraged to eat far too much fruit and fructose-laden processed foods, so raising the price of fruit would be all to the good.

You would think that governments would be quaking in their boots as their personal and party investments in real-estate threatened to take a dive and the property developer-industry mafias and triads would start cruising with kalachnikovs past politicians’ private residences late at night. But this has not happened – because the governments control the remaining levers that regulate land and housing prices and they ARE the mafia. [See, for instance, Labor Inc.]

Yes, with the sudden drop in mass migration, both temporary, landed, and permanent, many expected a huge drop in land and housing prices. However, this did not happen, due to the Federal government outrageously permitting people to cash-in on their superannuation, and the Reserve bank dropping borrowing interest rates. This created even more buyers than usual. The pressure on supply led to higher prices. The pressure has extended to the regions, raising both purchase and rental prices in places where the homeless have traditionally fled in search of affordable rentals.

Instead of a famine, it’s been a feast for the land-speculators, and misery has compounded for the homeless and precarious. If Jimmy Dore is right (see also, below), this will form part of a cycle: as a proportion of people default on their mortgages, with the next financial crash or when the Reserve Bank raises interest rates again, the banks will just put them on the market again, and again, and again.

With Australia’s borders closed indefinitely, however, outsourced-state land-companies and their colleagues in private development, fear that persistent lack of mass migration will ultimately outlast the super-cash-and-low-interest-loans-bonanza-in-demand. Then, they fear, land and housing prices will finally fall to reasonable levels, far too low for the growth lobby’s addiction to the high prices.

They have a strategy though. As readers of /node/2363 know, the growth lobby in government and corporate form has been trying to liberate big houses on big lots from the tenacious claws of undeserving old ladies, who rattle about so wastefully within them, unreasonably refusing to die and make way for more deserving younger age-cohorts. For this purpose the Liberal (Turnbull) government initiated a ‘downsizing tax-break” from July 2018, whereby if you are 65 years old or older and meet the eligibility requirements, you may be able to make a downsizer contribution into your superannuation of up to $300,000 from the proceeds of selling your home. (They don’t check the size of your new home.)

And, of course, there is another string to this house-liberation strategy, involving nursing-homes, whereby you sacrifice your home towards the cost of your ‘care’ in a nursing home. Over 65s are not real welcome in ordinary hospitals these days, and tend to finish up in nursing homes when anything goes wrong, overfilling them. Thankfully, COVID-19 has helped liberate nursing homes as well as houses, but apparently this may not be enough.

Which brings us to the ultimate strategy – or should I say - ‘final solution’? The AstraZenica vaccine. Introduced with a friendly face, initially, AstraZenica has acquired a spectral character, not unlike those Grim Reapers of the 1980s AIDS safe-sex ads. It has gradually been withdrawn from use by younger cohorts, until now, only those usually considered ‘too old to work’ - the ones who are imagined to rattle alone in rambling residences in leafy suburbs – qualify for AstraZenica, and only for AstraZenica. We are told that the average odds of their dying from the ‘rare blood clotting disorder’ linked to the AstraZenica vaccine are lower than the average odds of their dying of COVID-19 – if they get it. And they are damned if they do take the vaccine and damned if they don’t, because one or the other may still get them.

Are the risks of enough elderly thus liberating large lots in leafy suburbs for subdivision statistically high enough to compensate for low migration for a few years? It is difficult to estimate exactly, but every little bit helps, Sir Humphrey.

The United States government PLANNED for mortgagees to lose their homes from the 2009 financial crash?

In this Youtube broadcast of 23 March, Jimmy Dore gives his interpretation of how United States' Democrats planned to cause ordinary Americans to lose their houses as a consequence of the 2009 financial crisis! Incredibly, they seem to have colluded with Wall Street creditors to enable them to be able to seize mortgaged homes when mortgagees found themselves unable to make repayments.