This article was originally published at bloggerme.com.au Since Tony Abbott was elected, Australia has progressed with two trade agreements that place Australia at risk of Investor-State Dispute Systems (ISDS) — one already signed with Korea (which definitely includes ISDS) and another close to agreement with Japan (which may include an ISDS). ISDS creates a parallel legal system that allows foreign investors to sue Australian taxpayers if Australia passes laws that reduce the value of their investments or their profits.

Over recent centuries in the history of the West government has been about people and people’s rights. This led to some progress – at least formally, if not in practice - in relation to the rights of individuals. Such civic protections have been enshrined in systems of law and legislature i.e in formal constitutions which limit the power of leaders/rulers over the people. Formal constitutions often follow a tradition of establishing representative parliaments, an independent judiciary and an executive (in Australia, the Government’s cabinet) or some variation thereof and linked to the Magna Carta. The Magna Carta tradition is about protecting people from summary execution, or summary jailing or confiscation of property.These protections were sometimes far from perfect. Property rights were certainly not well protected for many English villagers who were removed from their land during the period of enclosures and industrialisation. Others such as Habeas Corpus – protection against arbitrary detention – have been somewhat weakened with recent anti-terrorist laws. The main point here is that for a past few hundred years (at least) the focus of constitutions for western governments has been on protecting the rights of people (and property rights). 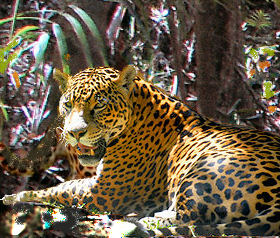 [image from Sheila Newman & wikipedia] ScienceDaily (Feb. 2, 2009) — "The Wildlife Conservation Society (WCS) has released photos from the first large-scale census of jaguars in the Amazon region of Ecuador—one of the most biologically rich regions on the planet.