Is there really any social justice or ethics that we continue to grow our own population and consumption levels if it means we parasitically must acquire valuable arable land from a country already being preyed upon by developed nations? 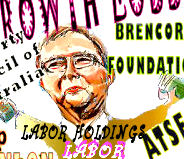