Add up all the neglected costs of downsizing and retirees have good reason to be wary of making the move. It’s time to debunk the myth of zero housing costs in retirement if we want to understand why retirees resist downsizing. Retirees have at least five reasons to be wary of the costs of downsizing. [Article first published at https://theconversation.com/downsizing-cost-trap-awaits-retirees-five-reasons-to-be-wary-80895 on 31 July 2017.] 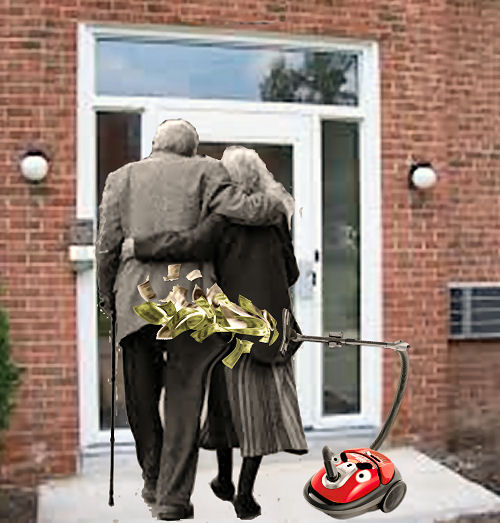 Retirees living in middle-ring suburbs face frequent calls to downsize into apartments to free up larger allotments in these suburbs for redevelopment. Retirees who fail to downsize into smaller units and apartments are viewed as being a greedy, baby-boomer elite, stealing financial security from younger generations.

It also makes sense to policymakers for retirees to move into less spacious accommodation and make way for high-density housing. Housing think-tank AHURI fosters this view. Yet seniors remain resistant to moving, in part because of the ongoing costs they would face.

The concept of zero housing costs in retirement is based on a 1940s view of a well-maintained, single dwelling on a single allotment of land where the mortgage has been paid off. This concept is incompatible with medium- and high-density housing and refusing to acknowledge ongoing housing costs may cause significant poverty for retirees.

When a house is sold the owner receives the sale funds minus the real estate and legal fees. When the same person then buys a different property to live in, they pay legal fees plus stamp duty.

For cities such as Melbourne and Sydney, these costs are likely to exceed A$70,000.

These high transfer costs may mean it is not cost-effective for the person to move.

Because apartment owners pay body corporate levies, people often assume this is just the same as periodic payment of rates, water, insurance and other costs. It is not.

Fees remissions for low-income retirees for rates, power, insurance and water are difficult to apply within a body corporate environment. As a consequence, these are usually not applied to owners of apartments.

Owners of standard suburban homes choose whether they want these services, with those on fixed incomes going without them.

Apartments are often sold as a maintenance-free solution for older people. The maintenance is not free. It needs to be paid for.

Maintenance costs are higher in an apartment than a standard suburban home because there are more items and services to be maintained and fixed. Lifts and air conditioning need periodic servicing and fixing. This is in addition to the mandatory inspections listed above.

It is a mistaken belief that the maintenance costs that form part of the body corporate fee include periodic property upgrades. This relates to items that are owned collectively with other apartment owners.

Major servicing at the ten-year mark and usually each five-to-seven years after that include painting, floor-covering replacement, and lift and air-conditioning repair or replacement.

Major upgrades may also include garden redesign or other external building enhancement including environmental upgrades. All owners share these upgrade costs.

Costs of upgrading the inside of an apartment (a bathroom disability upgrade, for example) are additional again.

Once the body corporate committee members pledge funds towards an upgrade, all owners are required to raise their share of the funds, whether they can afford it or not. Communal choice outweighs an individual owner’s need to delay upgrade costs.

Owners who buy apartments that are part of a body corporate effectively lose control of their future financial decisions.

Reason 5 – loss of security of tenure

Loss of security of tenure is usually associated with renters. However, the recent introduction of termination legislation in New South Wales gives other owners the right to vote to terminate a strata title scheme. When this occurs, all owners, including reluctant owners of apartments within that scheme, are compelled to sell.

There are valid reasons why termination legislation is desirable, as many older apartment complexes are reaching the end of their useful life.

Even so, as termination legislation is rolled out across the states, owner- occupiers effectively lose control of how long they will own a property for. They no longer have security of tenure, which means retirees may face an uncertain housing future in their old age.

Because current data sets do not adequately take account of ongoing costs associated with apartment living, the effect of downsizing on individual households is masked.

Requiring retirees to downsize for the greater urban good will shift poverty onto retirees who could barely manage in their previously owned standard suburban home.

Failing to understand the effect of high ongoing costs associated with apartment living and reinforcing the myth of zero housing costs in retirement will continue to lead to poor policy outcomes. 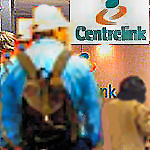 We've been publicising political alternatives in Australia, notably parties which promise to fight population growth, because we don't believe that the mainstream political parties are taking the adverse impacts of population growth seriously. Another party that wants a sustainable population is The Australia First Party (not to be confused with the New Australia Party). It also wants to abolish multiculturalism. Australia First cops a lot of flack, but it also attracts the people in our society who carry the biggest loads and cop the worst treatment. Here is an article about fronting up to the dole office. Anyone who has had to do this in the past few years will understand the sentiments.

Aussie Senior Citizens are now experiencing the effects of the collapsing Globalist economic system, which has been imposed upon Australians over recent decades by Liberal and Labor politicians dutifully implementing the Big Business agenda.

Seniors who have worked productively over a life time, have contributed to society with family and community activity, put some money aside, have paid taxation of 1/3 plus of income, and were duped into superannuation schemes, are now seeing their savings evaporate as this Globalist ideology crashes.

The wholesale sell out of our Australian manufacturing and productive capacity to foreign interests, and the deregulation of our financial sector, to create a subservient cog in the Global economic order as a “trinket” type raw materials supplier, and an immigrant dumping ground - is the root cause of the crisis likely to now descend upon Australians. [Members of the 3000 Club excepted].

Compulsory superannuation monies, instead of being allocated for Australian owned productive development, have been used to stoke the Stock Exchanges, and for other usage in speculative exploitation. It was all inherently prone to collapse as per the contradictions of capitalism.

A rude awakening is now descending on increasing numbers of Seniors as they are forced to undertake the “Centrelink Run” - coming to grips with a pension system programmed to comply with the IMF/ Internationalist/ Globalist agenda to minimise Social Security payments.

Step I: You front to the local office, and can experience first hand the Liberal/Labor/Green politicians’
immigration/ guest workers/ refugee rackets, but you fall into the queue for you still believe you count for something as a productive citizen, and your years of paying taxation had a purpose. You have your turn for the bureaucrat - and the near 100 question application form to see if the paltry $230 a week is to come your way. A number is allotted to you for the “system”. [No Members of the 3000 Club sighted].

Step 2: You bare your soul in the multitude of questions - any thought of the Aussie tradition that your
affairs are your business soon dissipates. Who are you? Prove it! How much cash have you under the bed? Have you been overseas and how much money did you take? Did you give any money away? What are your bank accounts? Any rooms rented out? Who has your super fund and how much is it? Prove it! What property do you own/got a beach shack/what’s it worth? How much for your house contents? What jewellery have you got? Can you cash in any life assurance?

It starts to dawn on you that this might all be about ensuring you get as little pension entitlement as possible.

But you are enticed by the idea that you might qualify for a health card for medical benefits, and reduced rates and government charges. How good is that!

When finished, you look at your arm to see if by chance a tattoo of the allotted system number has appeared, as you are starting to think that as an Aussie you no longer rate for much.

Step 3: You front before the bureaucrat, forms [and cap] in hand to be scrutinised. You are reminded
again about the Pension Bonus of $30k, available to you if you will slave on in full time work for another five years. [3000 Club Members get that in 10 weeks].

Your getting a bit edgy, aware that all your personal information is now going onto Big Brother’s database and available virtually to any Government department, and who knows who else. 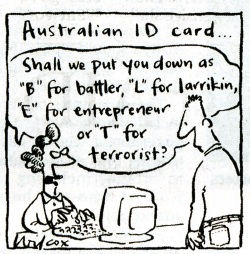 You are informed that on your details, that after 45 years of work and paying taxes, your in for a part pension - $85 a week, as is your spouse - yes, a pension of $170 a week between you for the good life. And, you must also report in each month on any extra income you may generate so your pension would be reduced. [Still no 3000 Club Members sighted].

The penny finally drops that in the Australia of today Aussie seniors count for nothing!

What can be done.

As a group of citizens, the reality is that Seniors are past “use by date” to the Liberal/Labor politicians who have inflicted the Globalist agenda upon Australia.

Protesting Pensioners can “bare their bras” for the systems’ media, or petition these same politicians, but it is pointless. Genuine Seniors may find this difficult to accept, but it is this very same political ilk down the decades who have restricted, and devalued pension entitlements to the current poverty line level, and who continue to parrot that a liveable pension cannot be afforded. [But not for 3000 Club Members].

Petitioning Globalist politicians that have overseen our productive enterprises and natural wealth taken by foreigners, connived for near zero tax for multinational corporations, and other schemes of tax avoidance, squandered untold $billions on alien immigration and anti Australian multiculturalism, AND, stealing the 7% taxation surcharge [passed by referendum in 1947] to fund all Aussies a pension, is a total waste of Seniors time.

The facts are that “Regime Change” - a change of attitude, psychology, economic and cultural direction through the complete and utter rejection of the present traitor political caste and their Big Business masters, is essential to now attain social justice for Aussie Seniors.

The Australia First Core Policy of Citizens Initiated Referenda [CIR] and Parliamentary Recall can ensure this change - CIR remakes the political landscape - no ifs - no buts, for the citizen is again in charge of our society and values, not vested interest politicians.

The Australia First Party program is for all Aussie seniors at retirement age to have a liveable pension, related to the average wage, and secured on supply of appropriate identity to the relevant government administration. Nothing else is needed!

Australia First will take back our productive and natural wealth; we want Aussie control, direction, and ownership of our Australian economy, free of all Globalist dictates, and with equitable payment of taxation to provide pension funding. And, no Globalist political parrots like the 3000 Club Members.

If you don't fight, you lose. Join the Australia First Party for the change for a livable pension.

Australia First Policy Page
Australia First has some good policies for those who wish to stop population growth and globalisation. It was founded by West Australian, Graeme Campbell, years ago, after he was drummed out of the ALP for speaking out against high immigration (at a time when immigration was perhaps less than one quarter of what it is now).