The 'densification' that planners push to accommodate overpopulation drives increasing water pollution risks, along with climate change. “Generally, we expect urbanisation to increase groundwater DOC (dissolved organic carbon) concentrations by up to 19 per cent, compared to agricultural or natural land use, likely as the result of contamination – for example, through leaking septic and sewer systems.” (Research paper.)

Climate change and urbanisation are set to threaten groundwater drinking water quality, new research from UNSW Sydney shows.
More than half of the world’s population faces a looming threat to the quality and availability of their drinking water because climate change and urbanisation are expected to cause an increase in groundwater organic carbon, a new UNSW study has found.

DOC is a naturally occurring component of groundwater, but the higher its concentration, the more difficult and expensive it is to make groundwater drinkable. In Australia, groundwater is widely used as the main source of drinking water for many cities and towns.

Lead author Dr Liza McDonough, of the Connected Waters Initiative Research Centre at UNSW, said the study forecasted elevated DOC concentrations because of projected changes in temperature and rainfall due to climate change, as well as increased urbanisation.

“We identified groundwater DOC concentration increases of up to 45 per cent, largely because of increased temperatures in the wettest quarter of the year – for example, in a number of south-eastern states in the United States. We predict increases in DOC in these locations could increase water costs for a family of four by US$134 per year,” Dr McDonough said.

“Other areas such as eastern China, India and parts of Africa already experience severe groundwater contamination issues. These may be further compounded, particularly in south-eastern China, by groundwater DOC increases associated with large predicted increases in temperature in the wettest quarter of the year by 2050.

“Generally, we expect urbanisation to increase groundwater DOC concentrations by up to 19 per cent, compared to agricultural or natural land use, likely as the result of contamination – for example, through leaking septic and sewer systems.”

Dr McDonough said increased groundwater DOC, whether naturally occurring or due to contamination, also posed a threat to human health.

“Groundwater is Earth’s largest source of freshwater and provides essential drinking water for more than 50 per cent of the world’s population,” she said.

“But, because most health impacts caused by DOC are related to the formation of by-products of water treatment chlorination and depend on concentrations of other water chemical parameters, the World Health Organization and many countries – including Australia – do not regulate DOC concentrations in drinking water directly.”

Dr McDonough said that while DOC is a naturally occurring, key element of groundwater it could combine with, and transport, potentially dangerous heavy metals otherwise bound to rocks and sediment where groundwater occurs.

“This is a concern when, for example, more than 100,000 lifetime cancer cases in the United States alone can be attributed to drinking water contaminants,” she said.

Dr McDonough said it was important to understand what caused high DOC concentrations in groundwater.

“An increase in groundwater DOC concentration impacts the ability and therefore cost to make groundwater drinkable,” she said.

“For example, we projected a 16 per cent increase in annual household water costs in some parts of the United States because of rising water treatment costs – due to the need to implement additional water treatment measures to remove increased DOC concentrations.

“The decrease in groundwater quality and substantial increase in water treatment costs will also compound existing constraints on groundwater resources, including availability.”

Dr McDonough said the impacts on groundwater DOC levels from climate change and urbanisation, while likely to occur globally, differed by geography and climate.

“Our research found that in arid climates, groundwater DOC concentrations increased with higher rainfall because microbes can better break down organic matter, such as leaves, under warm and increasingly wet conditions,” she said.

“Increased temperatures in arid environments, however, reduced groundwater DOC concentrations because when conditions are too hot and dry, vegetation and organic matter sources are limited.

“Our next step is to investigate how the character of DOC changes when you have different aquifer minerals, because some types of organic matter can stick to certain mineral surfaces and ultimately reduce this type of organic matter remaining in the water,” she said.

“This will help provide guidance on the most suitable water treatment options in areas where DOC concentrations are expected to increase.”

Mayor Robert Doyle has recommended that powerful owls be encouraged back to Melbourne's parks in order to reduce the possum population. He may be desperate for publicity, but he is giving a poor example. It sounds mean to possums, which he misrepresents as 'vermin' and might encourage still more cruelty to them by ignorant people. An anonymous contributor writes, "Mayor Robert Doyle is focusing on the wrong pest. ..." (This article first appeared as a comment by Nimby, "Melbourne Mayor Robert Doyle's war on possums," to candobetter.org.) 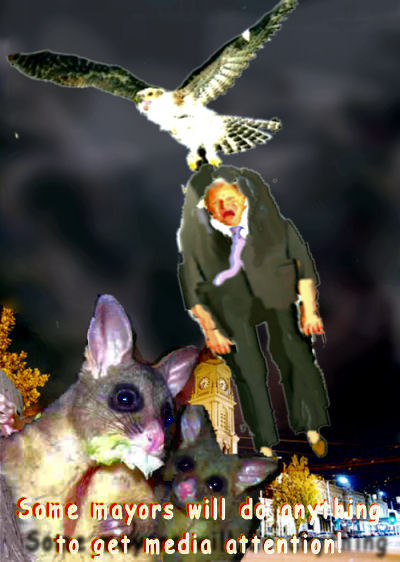 He says, "I know they are protected, but I come out of my house in South Melbourne and I'm virtually waist deep in possum poo."

Next year, nesting boxes designed to attract powerful owls will be placed in Royal Park in Parkville, and the Fitzroy and Flagstaff gardens in the city.

The Powerful Owl is symbolic as being one of the supreme nocturnal predators in the forests of south-eastern Australia, They are forest dwellers which rely on areas of old growth forests that contain mature, live hollow bearing eucalypt trees that can be hundreds of years old. The main component of the Powerful Owl diet across its range is Ringtail Possum, this may be supplemented by other arboreal possums and gliders depending on the geographic location and prey present, eg Greater Glider, Brushtail Possum, Sugar Glider, Yellow-bellied Glider.

Ironically, the powerful owl is Vulnerable in Victoria. They are adversely affected by the clearfelling of forests and the consequent conversion of those forests into open landscapes, but the species may persist in forests that have been lightly or selectively logged. Thanks to VicForests! Here we have contradictory policies from State and Local government.

Rheya Linden from Animal Active branded the Mayor "ignorant". The human population explosion has meant that native trees are being chopped, and the number of exotics have increased. What we need is an ecological balance, with MORE native trees!

Too many humans too ignorant to recognise our natural wealth

Mayor Robert Doyle is focusing on the wrong pest. Why not clean up all the alcohol venues and the drugs and violence in Melbourne's streets, and make it safe like it used to be? The violence and crime is not coming from possums, but feral humans! We can't fight against Nature and pretend we are a European city. Australia is a country called "mega-diverse", which means we are rich in flora and fauna. This is part of our natural wealth, and it needs to be embraced, not trashed.