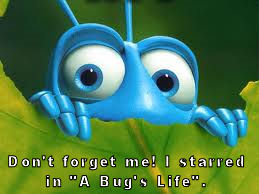 "Very few of us are bothered about creepy-crawlies, which is doubtless why there has been so little awareness of the staggering decline in insect numbers which has emerged, in recent years, as a disturbing environmental phenomenon, indeed, as one of the defining ecological features of our age and an alarming pointer to the future. But they don't only creep and crawl; these are "the little things that run the world", playing key roles in myriad ecosystems, and their disappearance has profound dangers..." Michael McCarthy of the Independent
http://www.independent.co.uk/environment/nature/nature_studies/nature-studies-by-michael-mccarthy-the-21st-century-bodes-ill-for-nonhuman-species-2196

The question is, why aren't the mainstream environmental organizations directing attention to this issue? Answer---IT IS NOT A FUNDING TOOL.

Imagine a Sierra Club campaign to save the creepy-crawlies. I can see the poster now---a leatherjacket fighting for its life as it writhes in pain after a thoughtless Tea-bagger sprayed his lawn with weed killer. Mounting a campaign to save the majestic "Rocky Mountain Cariboo" , or better yet, the magnificiently beautiful "Great Spirit Bear", on the other hand, is a proven winner---money just rolls in and the bureaucracy lives to fight another day. Insects don't fly----at least as a hook in pulling public heart-strings and purse-strings.

The same principle applies to the issue of population growth, and especially to immigration as its key driver. Why touch it when so many politically correct green yuppies might get antsy and walk away, or a corporate donor like the Royal Bank of Canada or TD bank might just stop giving? Better to focus on climate change and pictures of drowning polar bears, and pretend that good planning ("smart growth") will nullify any negative ecological impacts of population growth. But if green NGOs truly believe that climate change is a consequence of human activity, how can they be cavalier about the growing number of humans in that part of the globe where per capita greenhouse gas emissions are the highest (--or second highest, if Australians want to claim that title)? The imperatives of finance clearly dictates the priorities of environmental campaigns, not science.

Green Inc. must be seen for what it is. A business. A testament to Robert Michels "Iron Law of Oligarchy": any revolutionary organization or institution that dedicates itself to fundamental change and in the process grows a bureaucracy to achieve it, will come to pursue policies which serve the bureaucracy even if they run counter to the original aims of the movemnent.