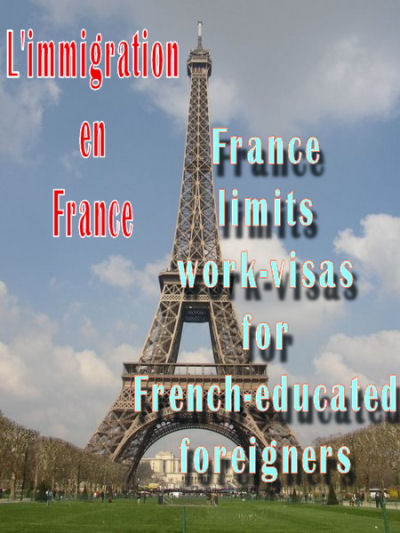 Claude Guéant is the Minister for the Interior in France, a position that traditionally carries the immigration portfolio. At the moment he is attempting to reduce the opportunities for legal immigration to France. One of his targets is to reduce by half the list of 30 occupations open to non-Europeans. (France has an open-door policy to other European Union nationals, who almost automatically acquire ten-year visas and permits to work. For people outside the EU, including Australians, Canadians, Americans, non-French Africans, Chinese and Indians, visas rarely extend over three months. A 'permanent visa' only lasts up to one year. No visa comes with an automatic permit to work. The latter must be sought independently from local prefectures. Although policy 'memos' (known in France as 'circulars') emanate from the Minister for the Interior from time to time, the interpretation and execution of these policies is carried out at local and regional level. On November 18, 2011's France 2, 8pm news, there was a report on protests and complaints from international students who had gained their qualifications in France but who were either being refused work permits or work permit renewals and being asked to leave the country. Guéant has said that "The right to study in France does not equal the right to work in France." Note that, in France, universities are free to French and foreign students with visas, but there are quotas on numbers, with preference given to French citizens.

France: 31 May Skilled Immigration Policy memorandum to Regional and Departmental Prefects from Minister of the Interior:

"Summary: The Government aims to adapt legal immigration to French society's needs and her capacity to welcome and integrate it. Taking into account the impact on employment of one of the most severe economic crises in history, this objective implies a reduction in immigration numbers, in line with the national objective recently announced, by adopting a qualitative and selective approach. In effect, priority must be given to the employment of professionals already legally resident in France, whether they be French or foreign. It is therefore your responsibility to exercise vigilance to ensure that applications for work permits are rigorously informed. You should be all the more rigorous where the employment in view is not particularly highly skilled. The procedure for change of status (students applying for professional work permits) should be closely supervised. Exceptions for students applying for a provisional visa in order to look for work must remain rigorously limited. Having lived legally in France as a student, salaried worker, or holder of a card of "competencies and skills" does not carry a right to any special consideration in the procedure of granting a work permit. These rules also aim to reinforce the fight against employers who misunderstand regulations protecting the right to work. To ensure that these instructions are properly executed, you should organise a meeting of specialists in these matters at your level." Source: http://www.circulaires.gouv.fr/pdf/2011/06/cir_33321.pdf - Translated by Sheila Newman from original French.)

This 2011 French immigration policy is interesting because it denotes a policy reaction that is very similar to one taken during the 1974 oil shock by the then Minister for the Interior responsible for immigration in France, Andre Postel-Vinay. Similarly, today, in 2011, the global financial crises that repeatedly threaten are probably symptoms of the rising cost of petroleum and other energy sources - like nuclear, plus the huge cost of wars currently being fought to regain power over oil producing states that won independence through OPEC.

The rationale which accompanied the ministerial recommendation to reduce immigration to France in 1974 was clearly based on the perception that economic hardship would be long lasting, blow out of population in the Third World would be inevitable, and that France could not save the world's poor by taking them all in.

André Postel-Vinay was the Minister responsible for immigration at the time. He had also previously been the main person responsible for administering foreign aid funds[1] for 27 years and was well aware of the burgeoning populations and economic and political problems in the third world. As well as this familiarity with external events, from 1963 to 1974 he had overseen the administration of an organisation for immigrant housing in France. His knowledge of the situation which had created the bidonvilles was extensive. His "Immigration Policy" recommendations were copiously studded with statistics about the gravity of immigrant housing problems. Whilst urging diversion of funding to improve housing for those immigrants already in France, he also advocated publicising the appalling housing situation and poor economic outlook overseas to the traditional sending countries in order to discourage both prospective immigrant workers and their families.[2]

Postel-Vinay said that three factors made ceasing immigration a preventative necessity: the doubling of third world population by late in the 20th Century; the likelihood of profound and lengthy economic crisis; and the problem of the public housing shortage for both French and foreigners.[3]

“The doubling of third world population that we are led to expect by the end of the century, gives rise, in my opinion, to considerable danger. [...] Unless development skills and technology were to improve at an astonishing rate, unless the spirit of human solidarity were to spread in a quite novel way, the proliferation of the human species will increase poverty and malnourishment over vast territories...

To reject, on principle, the idea of stopping or limiting the entry of new immigrants, would mean that we must allow immigration to increase, even if it adds to unemployment and the peopling of slums. This is indefensible. [...] I am aware of the shocking character of any kind of interruption to or limitation of arrivals, the inhumane quality of sending people back to poverty; but that poverty, alas, is likely to constantly increase and to reach geographical regions ever further away: we cannot take in an unlimited amount. We would perish without relieving it.” (André Postel-Vinay in an interview with Le Monde, 29/9/74, translated by myself.)[4]

This was to become long-term policy in France and the EEC.

The French immigration writer, Weil, theorised that shifts in French power-elites' bipartisan positions were based on fundamental economic changes, rather than on democratically expressed resentment of immigrants. (Immigration theorist, Money, maintained the latter.)[5] Weil's theory finds support in contemporary documents and interviews with Postel-Vinay in France and I found corroboration of these in opinions later expressed by Postel-Vinay to myself.[6] Postel-Vinay said that the situation with immigrants was reaching crisis proportions of homelessness and unemployment. I asked him if anything in particular had influenced him to believe that the oil shock related recession would be especially long and serious. He replied that he had been particularly influenced by the head of the CNPF (Confederation nationale du patronat français - National Confederation of French Employers)[7] at the time who had told Postel-Vinay that the recession was likely to be long and hard, with materials shortages, and that, since industry would be unable to employ immigrants it would be advisable to stop immigration.[8] Postel-Vinay then recommended the reduction in immigration. He also gave me a copy of the original document, "Immigration Policy" which alluded to advice from the CNPF.[9]See "The Growth Lobby and Its Absence," Appendix 6, "Copies of Original Documents from André Postel-Vinay.

Was ceasing immigration a logical economic decision arrived at independently by Germany, France and Belgium?[10] André Postel-Vinay told me that it had been his own idea to suggest it, but that persuading the government was helped considerably by the fact that Germany had already made the decision.

Guéant further precised that there has been absolutely no reduction in the number of foreign students admitted on French territory, which remains at around 60,000 per annum. [...]

But I say that in a country [...] where each year 110,000 more people people arrive on the job market, you have to start by concentrating on local demand for work. You have to recognise the differences between several kinds of countries (...) We have to be very careful about some countries. France isn't in the business of stealing educated elites from developing countries that need doctors and engineers." [11]

All notes come from "The Growth Lobby and Its Absence," except for note [11]

[2] See "The Growth Lobby and its Absence," Appendix 6, Document 'B', p.A6-3 for a copy of the original in French: André Postel-Vinay, "Politique d'immigration", (Note de M. André Postel-Vina pour le "Comité restreint"), 1 July 1974 (8 pages, numbered to 9, with pages 2 and 3 cut and stuck together and then photocopied. For instance, he wrote that "Whilst our housing program has never exceeded 117,000 dwellings in total, for the entire population, French or foreign, the number of families of foreign workers arriving each year in France has risen, on average, to 38,000 since 1970. In a country like ours, where there are a considerable number of slums, the comparison between the two numbers - 117,000 and 38,000 - gives an idea of the tensions and social oppositions that can arise in response to such a high rate of family reunion." Patrick Weil, La France et ses étrangers, op.cit., p.86, contains details of the anouncement that was circulated immediately to sending non EEC States warning them of France's decision to stop immigration and of the problems intending immigrant would encounter if they attempted to find work, housing and visas in France.

[5] See Chapter 4, thesis, "The Growth Lobby and its Absence," for my literary review of these authors.

[6] During a visit to his Paris apartment to collect copies of documents on the morning of Saturday 13 January 2001.

[7] The CNPF is the National Federation of French Employers.

[8] In response to a question that I asked Postel-Vinay during a visit to his Paris apartment to collect copies of documents on the morning of Saturday 13 January 2001. See other documents supporting these recollections of Postel-Vinay further on in my thesis, where I go into the events of 1974 in more detail.

[9] See "The Growth Lobby and its Absence," Appendix 6, Document 'B', p.A6-3 for a copy of the original in French: André Postel-Vinay, "Politique d'immigration", (Note de M. André Postel-Vinay pour le "Comité restreint"), 1 July 1974 (8 pages, numbered to 9, with pages 2 and 3 cut and stuck together and then photocopied. On page 7 he has written: "Dans la conjoncture présente, il y a tout lieu de croire que cette décision d'interruption serait bien vue des grandes organisations syndicales et, même, sans doute, du CNPF, au niveau supérieure." "In the present situation there is every reason to believe that this decision to stop [immigration] will be looked upon favorably by the big unions and, even, without doubt, by the CNPF, at a high level."