GM has the potential to increase hunger around the globe.

GM crops are being seen as an “answer” to human overpopulation, a “big Australia” and a way of securing food for the future. The global challenge is to produce 70% more food in the next 40 years. GM has the potential to increase hunger around the globe. 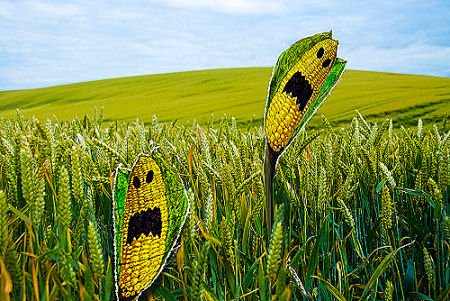 Greenpeace has been accused of being anti-science over the destruction of experimental GM wheat trials in Canberra earlier this year.

GM crops are being seen as an “answer” to human overpopulation, a “big Australia” and a way of securing food for the future.

Greenpeace's senior scientists, Dr Janet Cotter, says she thinks the big issue with GM is crop contamination.  She says we are seeing lots of canola contamination in Australia, and in wheat trials overseas we are seeing contamination of crops.  The insertion of genes into the genome causes unexpected and unpredictable results such as allergies - allergies are proteins and in peer reviewed studies protein introduced into a pea plant, have caused allergen problems.

Population growth in developing countries generates a huge challenge to food and nutrition security, with 93 per cent of world growth expected to occur in those countries while arable land is being reduced by land degradation and climate change. The global challenge is to produce 70% more food in the next 40 years. Of course, it's offensive to cultural, economic and religious sensitivities to keep within our ecological limits?

The success of the Green Revolution at feeding Asia’s growing population is touted across the world as a triumph of modern humanity over the limitations of nature and traditional farming. The Green Revolution is shuddering to a controversial halt precisely, when greater productivity is needed.  Dr Bourlag's “population monster” is rearing it's ugly head!

Lack of research done to detect any effect this herbicide and insecticide DNA might have on human health. Over the years we have had some horrific side-effects from the use of chemicals that had been researched for 10 years and later proved to be cancer-causing or dangerous to pregnant women. They were then withdrawn from the market.
GM has the potential to increase hunger around the globe. This jars with people's logic (and defies brilliant marketing campaigns by the GM industry) but the companies responsible for producing food globally could actually cause further food scarcity. The International Assessment of Agricultural Science and Technology for Development reported that
instead of allowing farmers to save and reuse seeds as they have done for generations, they will be required to purchase new seeds each year.

GM companies claim that their seeds will feed the poor, when in fact their only goal is greater profits.  GM canola can cross-pollinate with a number of other species, and eating such resulting crops would decertify organic livestock as well.

Shady agro-giant, that food-world Voldemort, Monsanto in the 1990s sold Indian farmers, stricken by drought and poverty, were so entranced by Monsanto's promises of wealth that they take on debt, at local moneylenders' extortionate rates, to buy the GM seed hundreds of times more expensive than traditional seed.

Scientists at Scotland's Rowett Institute found intestinal and immune system damage to rats fed GM potatoes. Even though some lectins are highly toxic to humans, the developers of the GM potato believed that it would be toxic to insects, nematodes and fungi without harming mammals. To his surprise and alarm Dr. Arpad Pusztai, a Hungarian immigrant to Scotland, found that rats fed the GM potato suffered damage to their immune system and digestive system.

Canadian gynaecologists have found insect toxins from GM plants in the blood of pregnant women and their foetuses.  The researchers suggest that the most
probable source of the toxin is GM food consumed as part of a normal diet in Canada, where GM presence in food is unlabelled.

Africa's solution to drought and crop diseases may be in growing genetically engineered crops specifically tuned to resist weather conditions and mature quickly. This could result in saving crops from losses of harvests, which are followed by hunger and starvation. Nearly 200 million people in Africa are undernourished.  At present, most African countries cannot advance GM crop research because national policies or regulatory systems are not prepared to deal with safety requirements. Only South Africa and Nigeria have a specific policy for biotechnology.

Facing a growing number of people in need of food aid, the Kenyan government gazetted existing legislation in August that allows for the importation of genetically modified (GM) crops as well as for the cultivation of GM food crops within Kenya.

Teresa Anderson, of the Gaia foundation, which partners with the African biodiversity network to prevent the industrial commoditisation of the continent’s agriculture, says Kenyan farmers’ opposition to the new legislation is a testament to how devastating GM could be for their farming practises. Farmer would no longer be able to save their seeds for the next planting season, and would be in possession of a patented product.

The decline of honeybees around the world continues to puzzle scientists. Australia is the only continent that has been spared the mite but it may soon be here.

The genetic modification leads to the concurrent genetic modification of the flower pollen. When the pollen becomes genetically modified or sterile, the bees will become malnourished and die of illness due to the lack of nutrients and the interruption of the digestive capacity of what they feed on.  Digestive shutdown due to hard material in the digestive tract compromises the immune system and points to GMO flower pollen.

Russian Scientists Find Third Generation of Hamsters Sterilized by GM Soy.  One group of hamsters was fed a normal diet without any soy whatsoever, a second group was fed non-GMO soy, a third ate GM soy, and a fourth group ate an even higher amount of GM soy than the third.

Using the same genetically modified (GM) soy that is produced on over 90 percent of the soy acreage in the US, the hamsters and their offspring were fed their respective diets over a period of two years, during which time the researchers evaluated three generations of hamsters.  GM crops, instead of being a solution to feeding a blow-out of global population growth, could actually solve the overpopulation crisis.

Nearly all the third generation GMO babies were sterile!

While Australia is in a more fortunate position than many other countries, our natural environment, our biodiversity and our agricultural resources are already under strain from the demands of our current population. To restore sustainability to our landscapes and waters, we need to reduce the demands on them.

The U.N.'s Millenium Development Goals has been trying to eradicate poverty, with a program that started in 2000, and the goal is supposed to met in 2015. However, the world is still at 2 billion people who make less than $2 a day. The problem is: overpopulation causes poverty and hunger, and makes nations vulnerable to corruption. If you tackle reproductive rights first, it's the first step in addressing poverty and food security.