A billionaire legally pays no personal income tax despite being heavily involved in the biggest resources boom ever seen in Australia. Poverty, unemployment, homelessness and inadequate public housing, public healthcare and public hospitals continue to be a pressing concern for an increasing number of Australians living on a continent inhabited by 22 and a half million people who are in the midst of an unprecedented resources boom. The Victorian state government, needing 250 million dollars to tackle the crisis in the child welfare sector, can find 55 million dollars for a four day Grand Prix but can only find 12.5 million dollars to tackle the pressing issue of child welfare. 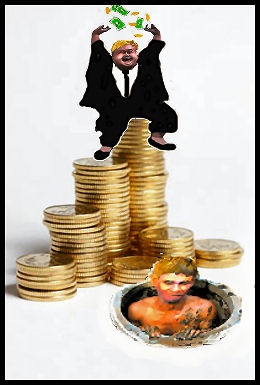 Billionaires publicly squabbling over football teams bring the game into disrepute. Another billionaire tries to squeeze every last cent out of the Australian Grand Prize concession despite successive Victorian State government’s having wasted half a billion dollars of public money trying to keep alive a private sporting event that should have been euthanised years ago. A billionaire legally pays no personal income tax despite being heavily involved in the biggest resources boom ever seen in Australia. Another billionaire uses he enormous wealth built by exploiting public resources which she pays a peppercorn rent for to buy up 16% of Fairfax corporation because she’s not happy with the coverage of her activities. Billionaire corporations invest 22million dollars in a publicity campaign to unseat a Prime Minister who had the audacity to try to introduce a mining resources super profits tax which would have resulted in them pushing a few more crumbs off the corporate table into public coffers. Billionaire banks make record profits and increase their interest rates despite the Reserve Bank not increasing interest rates.

Poverty, unemployment, homelessness and inadequate public housing, public healthcare and public hospitals continue to be a pressing concern for an increasing number of Australians living on a continent inhabited by 22 and a half million people who are in the midst of an unprecedented resources boom. The Victorian state government, needing 250 million dollars to tackle the crisis in the child welfare sector, can find 55 million dollars for a four day Grand Prix but can only find 12.5 million dollars to tackle the pressing issue of child welfare. Every day we see a handful of oligarchs use the monopoly they exercise over parliament because of their enormous wealth dictating parliamentary policies to political parties that are more interested in extracting every last dollar from pay as you earn taxpayers and small business than taxing billionaires and corporations in a county where the corporate owned media and the government gelded ABC are too frightened to report the facts. No wonder I'm disillusioned.

The only comfort I draw from my disillusionment with the political processes and institutions in Australia is, as despair, not hope becomes the prevailing public emotion in this country people will follow the example set by the Arab Spring and the Occupy Movement and tip over the apple cart to ensure everybody living in Australia can enjoy the bountiful fruits of this land.

Solutions to these constraints.

1. Abandon tax-deductibility status
or
2. Create or find another organisation or group which is not tax-deductible to use the information and advise on political choices accordingly.

Candobetter.org - http://candobetter.org has remained informal and has not sought tax-deductibility so that it can comment freely. We like to get news and views and would be prepared to publicise a voting recommendation. Our platforms are: Reform in democracy, environment, population, land use planning and energy policy. We are basically a netsite with a variety of voluntary journalists who operate under their own names or pen-names. We love new authors. We also republish and publish reports on submissions or the actual submissions, which are so often wasted by being sent to the Government.

Candobetter has taken advantage of one of the few good things the Howard government did, and that was reform of Australia's defamation laws. It is now much safer to publish the truth, so it is much easier to write interesting and informative articles about what is really happening in this country. We publish from all around the country, with the aim of showing people that what is happening in a place like, e.g. Devilbend, is also happening in NSW, e.g to Cumberland Woodlands or with the Repco Rally in Tweed Valley. At the moment the editors support most of what we do from their own pockets and spare time. We are always very pleased if someone offers to pay some of the bills. The biggest cost is time, which is not billed for. The biggest financial cost is our independent server access. This independent server also means that our website is safer than most.

The disadvantages of tax-deductibility:

Tax deductibility for environmental organisations gained popularity and became a kind of criteria of respectability because it was felt that the deductibility might encourage wealthier people to contribute more donations and the respectability attribute might make people feel they were joining something mainstream and important. Goals included getting a reliable income so that the environmental organisation had a more solid foundation. Some organisations became so solid that they could employ people and fund permanent premises. They then frequently ran into problems where the secondary aim of employing people to do their work turned into a dominant need to continue to finance those peoples' salaries. In my opinion a number of big organisations have become little more than government departments because of this.

This was the point where a lot of organisations should probably have decided to ditch their tax-deductibility status because our environment and wildlife protection are so threatened by government-supported corporate development that environmental activism generally requires opposition to most government programs.

Enviromental lobbying remains a discreet option but I would not think that this was directly tax deductible, albeit one assumes that members could deduct cost of membership if the lobby-group were furthering their income-gaining activities. But, overall, environmental lobbying has few places to go now, since our Federal and State laws are so antipathetic to environmental and wildlife aims, not to mention democracy.

Environmental lobby groups, like unions, have problems continuing to offer what they traditionally offered their members because the laws no longer serve the public. For instance, a union once could afford to fund a worker's legal defense because workers once had substantial rights at law in Australia. These days, unions tend simply to advertise referral to the services of legal firms, which then give the first consultation for free. In turn, the legal firms take up comparatively few individual cases because there is so little basis now upon which to fight them.

Similarly, where environmental groups could once point to planning laws that protected citizens' rights (and indirectly wildlife and vegetation), these democratic laws that served environmentalists are fast disappearing.

An indirect indicator of this situation is that Governments in Australia are eroding the concept of 'citizen' with the term consumer, and 'participatory democracy' is being replaced with commercial 'choice', with consultation reduced to public relations or outsourced to spin-doctors working for state/private partnerships or government corporate bodies, such as Victoria's water corporations (See for instance, a href="http://candobetter.org/node/1236">"Melbourne residents held to ransom on water"and the SEITA tollway projects.