The Lindy Tapes documentary premieres on Channel 7 this Sunday Hans Brunner was the man who finally identified the dingo hairs in the Azaria Chamberlain Appeal in 1988. He also examined the jump-suit she had been wearing and experienced the attitudes of Northern Territory officials involved in the case. Here we publish his remarks on the recent coronial verdict. He is refreshingly candid. He also defends dingos and comments unfavorably on the the fining of a woman who fed hungry ones on Fraser Island. Brunner's remarks add to the evidence that Australians should not just assume that the Australian justice system and media are basically reliable. Nor, particularly, should we assume that the government knows what it is talking about with regard to Australian wildlife. These 'authorities' need to be questioned constantly and those who question them should not be easily dismissed. 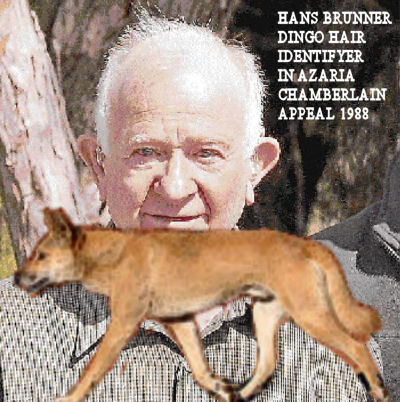 In 1980 Azaria Chamberlain disappeared at Ayers Rock/Uluru. She was 9 weeks old. Her mother said that she had seen a dingo leaving the tent. The implication was that a dingo had taken the baby. Mrs Chamberlain however, was accused and convicted of murder.

On June 12, 2012 a second coroner delivered a verdict that a dingo did take Azaria.

I asked Hans Brunner what he thought of this and published his response as a comment, on June 13, 2012. He wrote to me,

"Why did it take so long to finally admit that a dingo took the baby Azaria? This result was obvious to me right from the start. Mrs. Chamberlain would have had to be twice as clever as Houdini to accomplish what she was accused of. I thought that it was over and done with after I identified Dog (Dingo) hairs found on the jump suit and singlet. But no, the 'powers that be' did not like to admit that Dingoes can be a danger to children as this could have badly affected tourism. A lot of the scientific evidence given was scandalous and perverted and left the door wide open for a conviction. We can't blame the judges when they were fed with lies.

But now I am elated that the truth has finally been accepted."

Doubt in public mind, re jumpsuit

This statement about the role of dingoes in the fate of Azaria Chamberlain elicited some doubtful comments.

One comment was, "Its not so much that I don't believe it. It's that I don't believe there was no human involvement at all... Someone took her from that tent and the dingos may have ended up with her. It just doesn't sit right ; I'm not saying that Lindy did or didn't have anything to do with it, but I'm just not convinced."

Another comment was, "The biggest question in my mind is how did the blood-stained jumpsuit get off the baby in one piece and undamaged?? Why did no one see anything? Evidence was removed beforehand. There are just too many unanswered questions surrounding the whole situation."

I asked Hans these questions and he wrote the following explanation based on his observations of material for the Appeal. It contains information about police attitudes of the time, which is shocking. One can only feel the greatest dismay at the way Lindy Chamberlain was treated by our police, court and media.

"I have seen and carefully inspected the jumpsuit and singlet as well as many other items in Canberra.

The jumpsuit was soaked with blood and badly damaged in front. I have taken special notice of the ends of the fibers in the damaged area and found them with torn ends and not cut. I was well trained for this as I had to examine lots of sheep wool found in wild dog droppings. When the wool had natural tips it was from a lamb that has not yet been sheared. The others had clearly cut ends.

As to human intervention, I have no doubt that this happened, but only AFTER the dingo took Azaria. I belief that the baby was taken from the dingo, disposed of, and the clothes placed where they were found.

At an earlier stage, just when the clothes were found, I rang the police and offered to examine dingo droppings collected in the surroundings to see whether I could find remains of Azaria in them. I was bluntly refused and told that, "She did it anyhow," and the phone went silent. I was only asked very much later by the Defence to examine hairs mounted on two microscope slides. This was very easy for me since I used dingo hairs as reference sample in my book, The Identification of Mammalian Hair.

As for the skeptics, they probably took only notice of what was fed to them by journalists and crook scientists, while the real information remained hidden from them.

I love dingoes very much. I worked with them while two were in captivity for two years at the Keith Turnbull Research Institute in Frankston.

I am still extremely angry that a women on Frazer Island, who fed a hungry, sick looking dingo, was fined $ 40,000 for giving it some food.

When does injustice stop?"

[1] Mr Brunner was then a Senior Technical Officer for the Department of Conservation, Forest and Land. He developed the technique for identifying mammalian hair which was published in 1974 and is used around the world. In Australia users include the CSIRO, Government agencies and universities.