And not because of your clever advertisement: 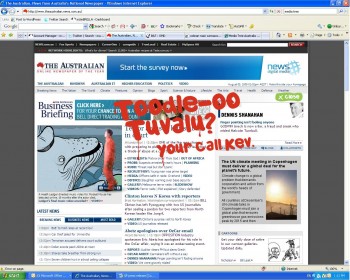 Greenpeace is running a site takeover of the home pages of The Australian and Courier Mail websites today, featuring a protester walking out of the ad and spray painting a slogan on top of news stories.

The ad, masterminded by DraftFCB, as part of the group’s anti-coal lobbying, will run for one day only on the News Ltd sites.

Peter Novosel, interactive creative director at DraftFCB, said “The idea needed to be disruptive to capture the attention and imagination of millions of eyeballs all in the space of one day. We’re ecstatic about the work and the response.”

Chris Washington-Sare, head of fundraising for Greenpeace said: “This is the first time Greenpeace Australia Pacific has launched an integrated campaign of this nature.”
We'll keep saying it until we're blue in the face: Stop giving News Ltd. your supporters' money.

News Limited is a company that has done inestimable wilful damage to democracy, journalism and the environment in Australia in Australia and throughout the world.

If you absolutely insisted that you need to run your advertisement with News Ltd., they should pay you for lending them credibility they do not deserve.

Would it kill you to focus on any other medium (such as billboards, local television, independent publications - even APN or Fairfax press - at least they are Australian owned)?

Sea Shepherd Offers the Olive Branch to Greenpeace Once Again

Sea Shepherd Conservation Society today issued the following official appeal to Greenpeace for cooperation on the issue of Japanese whaling in the Antarctic Whale Sanctuary.

An Appeal for Cooperation from Captain Paul Watson

Okay, here we go again, but nothing ventured and nothing gained.

This is the official 2008 Sea Shepherd Conservation Society request to the Greenpeace Foundation to work in cooperation with each other to defend the whales of the Southern Ocean Whale Sanctuary for the 2008 and 2009 Antarctic summer.

The targeted whales need all the help they can get when the Japanese whaling fleet returns to illegally slaughter endangered whales in the Antarctic Whale Sanctuary in December 2008.

During the last season we stopped them for 50% of the time and cut their quota by 50%. If only we had two ships and sufficient funding we could stop them up to 80% percent and perhaps to 100%. But we are a small organization with only one fast ship to deploy and we need to raise funds to finance the campaign.

But there is a solution. If both the Sea Shepherd Conservation Society and the Greenpeace Foundation could cooperate in a joint coordinated effort to oppose the Japanese whaling interests we could stop the pirate whalers cold in Antarctica.

Every year Sea Shepherd has supplied Greenpeace with the Japanese coordinates when we have found the fleet although Greenpeace has refused to return the favor. And yes there have indeed been harsh words between Sea Shepherd and Greenpeace over the years but the word Greenpeace does include the word “peace” and therefore I am appealing to Greenpeace once again in the name of peaceful cooperation to work with Sea Shepherd to protect the whales.

Let the past stay in the past and let’s deal with the present with a focus on a constructive future. There really is no practical reason why Greenpeace and Sea Shepherd cannot work together.

After all, I am an original Greenpeacer and a co-founder, not just of the Greenpeace Foundation in 1972 but also of Greenpeace International in 1979.

Both Sea Shepherd and Greenpeace work towards our goals in a non-violent manner although our definition of non-violence is not harming sentient life. As Martin Luther King once wrote, “violence cannot be committed upon a non-sentient object.”

The Sea Shepherd Conservation Society has never caused a single physical injury to a single person in our entire 31 years of operations. Nor have we ever had any crew convicted of a felony crime anywhere in the world. And we have never been sued.

The Dalai Lama is a Sea Shepherd supporter and he describes the Sea Shepherd approach as being consistent with the spirit of Hayagriva or the compassionate aspect of Buddha’s wrath meaning that we should never injure anyone but sometimes we need to be intimidating to intervene against violence.

I don’t believe our tactics are really the reason for the refusal by Greenpeace to cooperate with Sea Shepherd. After all Greenpeace has worked cooperatively with Earth First! whose tactics against property are far more extreme than Sea Shepherd.

Sea Shepherd is even willing to accept and forgive the violence of Greenpeace that causes harm, suffering and death to sentient beings that the crew consume on the Greenpeace ships as food.

Our ships are vegan vessels and thus we have fully embraced Ahimsa in our tactics whereas unfortunately Greenpeace has not. We do not however judge Greenpeace for this and request only that Greenpeace not judge us in return for our destruction of machinery utilized in the illegal slaughter and exploitation of sentient life.

I have asked this before and I will ask it again but how can Greenpeace ever hope to promote peace between nations and between humanity and nature when Greenpeace refuses to embrace peace within its own family?

This ridiculous animosity between Greenpeace and Sea Shepherd has lasted for three decades, longer than most wars between nations. In fact no one seems to remember just what the reason for the animosity is. The hostility seems to have become institutionalized. Sea Shepherd would like to see an end to this disharmony to allow both organizations to work together.

It has never been my intention to destroy Greenpeace. I am responsible in many ways for the birth and rise of Greenpeace originally, and why would I want to destroy such an achievement?

It is of interest that Greenpeace incorporated the word “foundation” in 1972 because of the book Foundation by Isaac Asimov. In that story there are two foundations, the large one and the more flexible smaller one – the Second Foundation. The role of the Second Foundation was to keep the Foundation on track and that involves strategies that include some that are tough. I have criticized Greenpeace in the past because Greenpeace needed to be criticized and that was not a negative thing although a negative response to criticism can escalate into a feud.

But feuds can be ended and I have attempted to end our feud many times over the years. But ending a feud takes both parties and unfortunately the offers have never been received and accepted and Sea Shepherd, and in particular I, have become objects of scorn and derision amongst some in Greenpeace.

But we should agree that our petty human squabbles are trite and trivial in comparison to the violence assaulting the defenseless species of the planet. Strength lies in diversity and it also lies in unity. A movement that is both diverse and united is the most powerful of social movements.

Our ships all fly the same flag – the flag of the Netherlands. Some of my crew have served on Greenpeace ships and some Greenpeace crew have also served as Sea Shepherd crew. I myself served as 1st Officer on Greenpeace voyages between 1971 and 1977. Many of the original founders of Greenpeace like Robert Hunter, Lyle Thurston, John Cormack, David Garrick, and Rod Marining have sailed with Sea Shepherd.

So how about it Greenpeace? Together we can keep the Japanese fleet on the run. Let’s trade coordinates and relieve each other as the other ship refuels. Let’s deploy our crew and our tactics together in a united front on common ground.

You are not my enemy and I am not your enemy. The whalers and those who seek to destroy ecological harmony on this planet are our common enemy. We make them stronger when we are divided and we make them weaker when we unite.

This year presents us with a renewed opportunity to unite against the outlaw whalers of the Southern Ocean. Shall we do it?  Shall we work together in cooperation with each other? Shall we both contribute to a stronger effort and a stronger movement? Shall we fly the Greenpeace and Sea Shepherd flags side by side as we point our bows southward?

I hope for the sake of the whales and for this planet that we can and that we will.

I think it would be amazing if Sea Shepherd and Greenpeace could host a joint media conference in Santiago, Chile at the annual meeting of the International Whaling Commission to announce a working cooperative alliance to oppose the outlaw whalers.

My fellow Greenpeacers, (I am a lifetime member) I await your reply.

Sincerely in the Spirit of Cooperation to Defend the Whales,

See also: No peace with Greenpeace it seems of 18 Jun 08
Sea Shepherd prepares to mount a major offensive against whaling of 12 Jun 08
There is something very rotten in Denmark of 10 Jun 08
Queensland to give green light to shark extermination of 1 Jun 08
Is Greenland’s “subsistence” whaling a profit making scam? of Jun 08
A global map of human impact to the marine ecosystems of 15 Feb 08

What you can do: Donate to the Sea Shepherd Conservation Society. Nearly all funds go to saving whales and other endangered marine species and little is spent on bureaucracy.