During the high immigration Howard era- the fuss about the boats was a smokescreen for the fact that we were getting a lot of extra government induced totally legal non- refugee immigration which was putting pressure on absolutely everything- environment, roads, housing etc. . Howard was a high population PM whist pretending to be jealously protecting Australia’s borders. This hypocrisy and the same game still goes on with Julia Gillard although without “children overboard”. 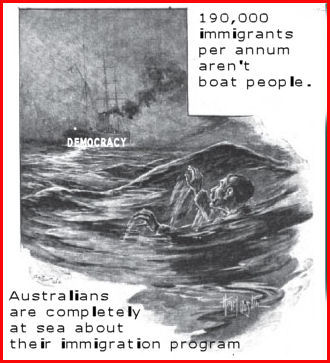 In their second series of Go back to where you came from SBS Television convey the message that a large section of Australian society are really worried about asylum seekers, notably 'boat people' flooding Australia. It seems that those same Australians do not have a clue as to the real flood, which consists of hundreds of thousands of economic migrants and their families. It appears (from what Mr Reith said on Insight on Friday 31 August 2012) that governments believe that Australians are pacified simply by the being told by governments that immigrants are 'legal' and that the immigration stream is properly managed.

Nothing could be further from the truth.

The Truth about immigration in Australia

During the high immigration Howard era, the fuss about the boats was a smokescreen for the fact that we were getting a lot of extra government induced totally legal non-refugee immigration which was putting pressure on absolutely everything: environment, roads, housing etc. . Howard was a high population PM whist pretending to be jealously protecting Australia’s borders. This hypocrisy and the same game still goes on with Julia Gillard although without “children overboard”.

Asylum Seekers - Onshore or Offshore Processing; that is the question

The asylum seekers have the right to seek asylum. They are not “illegals” as Tony Abbott calls them. Whether their claims should be processed on or offshore is the main question. The numbers of people who arrive by boat are very low compared with the numbers of people who come in as immigrants under our skilled migrations scheme. The numbers the government plan to admit as permanent entries in the non-refugee "planned" migration stream this coming year is 190,000 up from 185,000 in the year 2011-12.

Australia brings in about 14,000 people under its humanitarian program and any successful applicants amongst the boat arrivals are included in this quota. I think the government has just recently increased this to 20,000.

The ultimate carrying capacity for Australia is, I believe (from my reading of books and Internet) quite low. The Aborigines numbered less than one million when Europeans arrived. Australia now carries more than 20 times that number of people largely because fossil fuels enable our very infertile and intermittently watered soils to produce far more than they would without this assistance.

Australia is already overpopulated. This is clear from all the environmental indicators. See for instance, the 2008 State of the Environment Report for Victoria. All indicators are declining because of population pressures. These include waterways coastal areas, biodiversity...

Australia really needs to stabilise its population as soon as possible and then allow it to reduce. With no immigration at all Australia’s population would increase by about 150,000 p.a. for the next few decades due to the number of women of childbearing age in our population. Until there are fewer women in their child bearing years, as the population ages, without high immigration, the growth rate would remain around half what it is now, which would still be quite high.

See the Australian Bureau of Statistics (ABS) figures for 2011 at http://www.abs.gov.au/ausstats/[email protected]/mf/3101.0/

In other words- I do not get too worried about asylum seekers as a component of Australia's population growth when governments are significantly undermining our lives, our future and unraveling our environment through huge numbers of invited and economic immigrants, whether asylum seekers come or not.

I find it strange and somewhat alarming that apparently so many viewers of SBS do not have a clue about the problem of the growing numbers in the planned immigration stream. Why didn't SBS even mention this in their four nights of program on the subject of fear of asylum seeker floods?