I am, together with a female I never met, excited to announce the non-birth of the son or daughter that was never conceived due to our proactive determination to ensure that outcome. This non-being was not born today on January 1, 2014, nor on any other day of our adult lives. Accordingly, nothing weighing 7 lbs. 14 ounces or any other weight issued from anyone's womb on that day or any other day on our account. And no grandfather, grandmother, uncle, aunt or sibling irrationally celebrated the arrival of a newborn simply because he or she shared their genes. 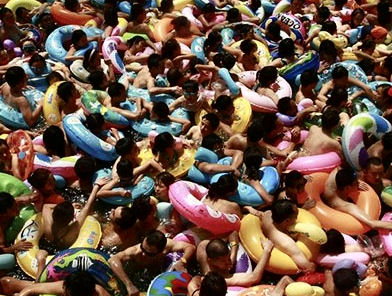 However, the planet shared our excitement. Since there are 152 more people born than die each minute---or 220,000 a day---more people than there are primates in the entire world----Gaia thanks us this and every other day for this joyous non-event---particularly since it occurred or did not occur in Canada , where each newborn on average will emit 23 metric tonnes of Green House Gasses each year, consume about 46,000 pounds of minerals annually and 3.6 million pounds of minerals, metals and fuels in his or her lifetime.

In the context of an ever diminishing base of affordably accessible non-renewable natural resources---which enable our industrial economy and underpin the sustenance of billions across the globe---every extra human pushes those of lesser means off the plate. In a world of 'continually less and less', all survivors will of necessity be party to manslaughter. To live they must eat someone else's lunch, and one day that someone will live in their nation or neighbourhood and not out of sight and out of mind in Africa or Asia.

It is my hope that one day non-birth announcements like this will fill the newspapers and childless people will be the object of public gratitude, along with those who adopt rather than conceive children---while those who have more than one child will suffer the same disapproval as thieves, murderers and drunk drivers who commit vehicular homicide. "Green" celebrity parents of large families, meanwhile, will be excoriated as the ignorant, selfish hypocrites that they are. Unlikely? Remember that once upon a time, not long ago, smoking in public places, driving without seat belts or inebriated were thought inalienable rights. It is amazing what a crisis can do to effect a sea-change in attitudes. Suddenly and hopefully not too late, the public will realize that we are in an emergency.

And perhaps one day a prize will be awarded to a couple who do not have the first baby of the New Year.