We get a lot of commercial press releases at candobetter.net and we don't use many. However this project which markets renovation for energy use reduction, rather than tearing buildings down and constructing new ones, is very interesting. The iNSPiRe project is a four year FP7 project that brings together 24 partners from the combined fields of research and development, industry, small business and not-for-profit organisations, to tackle the problem of high-energy consumption. The research will produce systemic renovation packages that can be applied to existing buildings to reduce primary energy consumption to lower than 50 kWh/m2/year.

I am, together with a female I never met, excited to announce the non-birth of the son or daughter that was never conceived due to our proactive determination to ensure that outcome. This non-being was not born today on January 1, 2014, nor on any other day of our adult lives. Accordingly, nothing weighing 7 lbs. 14 ounces or any other weight issued from anyone's womb on that day or any other day on our account. And no grandfather, grandmother, uncle, aunt or sibling irrationally celebrated the arrival of a newborn simply because he or she shared their genes.

Today I helped a registered nurse to scan documents to submit in a job application. While we were doing this, she mentioned to me with great concern that she had heard that the government is talking about making people work until they are 70 years old and make them take out loans on their homes in order to fund their retirement. "I'm only 46," she said, "but I didn't work when my children were young and I never had the money to save for a home. So I'm supposed to keep on working until I'm 70. I'm too tired now to work full-time because, even though standards are slipping, working conditions are getting tougher and tougher and management more and more unreasonable." The latest productivity report on An Aging Australia supplies policies to undermine the political strength of older people who would otherwise be able to represent the rest of the community and defend the wealth and security basis of the younger generations. Blaming older people for economic decline that has its real seeds in resource decline sets the scene for generational splitting. However, the real targets are actually today's young people and their children.

Canadian indigenous protest fracking at Rexton, New Brunswick. It is distressing to see the powerlessness of these citizens. How frightened they are, aware that they are too unhealthy and disempowered to fight for their rights. Canada is becoming one scary place. Because of consumer culture, overpopulation and the growth lobby, democracy is going to disappear. What will happen to these peoples' water? It's not only Indians who don't have rights to stop fracking in Canada; it's anyone.

Jenny Warfe went to the Westernport Catchment Committee meeting yesterday 18th October 2013 to hear the PoHDA CEO Mike Lean’s presentation about the proposed Hastings Port expansion. It was all about business as usual, ignoring resource depletion, seeing growing the economy as the only way to provide jobs, unwilling to contemplate the ceasing of engineering population growth upwards. Here is a report.

The Alliance against fracking in South Africa, AfriForum and Treasure the Karoo Action Group (TKAG), has said that shale gas exploration cannot proceed, following a statement by Trade and Industry Minister, Rob Davies, that Government could authorise shale gas exploration before next year's elections. See also other candobetter articles on fracking here: http://candobetter.net/?q=taxonomy/term/3020

Bill Gross, Nouriel Roubini, Laurence Kotlikoff, Steve Keen, Michel Chossudovsky, the Wall Street Journal and many others say that our entire economy is a Ponzi scheme.

Report on Richard Heinberg's tour of Australia, Melbourne talk: We should remember that the economy is a subset of the environment and that 'not sustainable' does not mean 'insufficiently eco-groovy'. Heinberg pointed to Australia's growing reliance on petroleum and its decreasing production and suggested that the policy of growing our population needs a profound rethink. Some strange and interesting responses from the audience. And a standing ovation for Australian MP Kelvin Thomson, who was chairing Heinberg's session. Not to mention Jenny Warfe - a terrific new Vice President for SPA Victoria and Tasmanian Branch. 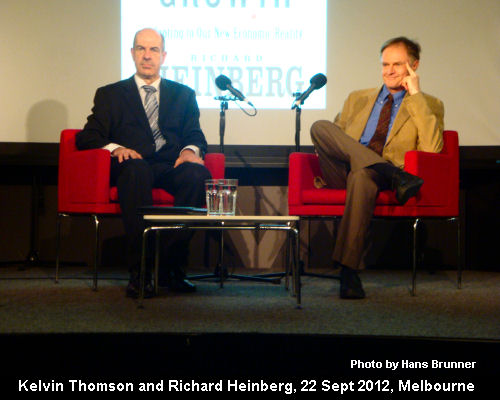 (The following is based on notes taken from Richard Heinberg's excellent talk and does not purport to be verbatim.)

Plentiful energy in the early 20th Century caused a 'problem' of overproduction. Consumers did not have the income to keep up. Tactics to overcome this structural resistance included advertising, planned obsolescence, fashion (bringing out new models), and, most of all, credit (i.e. debt.)

Credit is a key factor producing economic growth. Delinking money from precious metals helped this along because money could be created with little restraint.

Kelvin Thomson MP will be chairing Richard Heinberg's talk about his book, The End of Growth 7.30pm. on Saturday 22 September 2012 at The Wheeler Centre, 176 Little Lonsdale Street. Heinberg is a well-known peak oil blogger and writer who delivers an entertaining and stimulating message on the serious subject of resource depletion which Australian governments and development and financial planners at all levels simply cannot cope with. At a time when Australia continues to back military intervention in the oil-rich Middle East, Richard's talk is especially topical. As well as that, it is the reality we all must deal with. So go along and then take the message back to your state and federal political representative and your growth-obsessed local council. 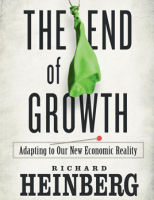 Let's hear it for the End of Growth

Senior Fellow at America’s Post Carbon Institute, Richard Heinberg, will be in Melbourne on Saturday 22 September as part of his national speaking tour on how to shape the economy of the future.

Mr Heinberg, who has written extensively on peak oil, will speak to his latest book “The End of Growth”.

Bill McKibben has recently unveiled some new "terrifying math" about global warming. But there are other numbers that terrify me more. My mother used to tell me to stop worrying, because it is not the things we worry about that usually get us, but the things we don't see coming. I think she was right. 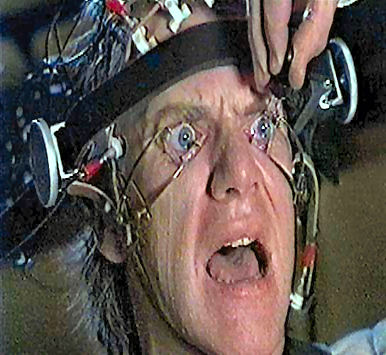 A third of the summer Arctic ice is gone and oceans are 30% more acidic.
We are already three-quarters along the road to the two-degree increase that we have been told is the tipping point beyond which runaway temperature increases follow.
We are on pace to exceed the 565 gigaton carbon “budget” left to keep us under the tipping point in just 16 years.
We are planning to burn oil, gas and coal reserves that would exceed this carbon budget by a factor of five.
To keep “under budget”, we must keep 80% of known hydrocarbons in the ground.
http://www.rollingstone.com/politics/news/global-warmings-terrifying-new-math-20120719

Yes, those numbers sound truly terrifying alright. But try these on for size:

October 31, 2011
7 billion humans on Planet Earth.
A thousand times more people than what there were through most of human history.