The Association of Relinquishing Mothers (Vic) represents hundreds of women who have lost their children to adoption. Today we are protesting on the steps of Parliament House against the cruel and inhumane amendments to the Adoption Legislation that the Victorian Government is putting through the Upper House this afternoon. If these amendments go through, we can be stopped from making contact with the (now adult) sons and daughters who were taken from us as babies, and if we try to do so, there can be criminal sanctions put in place. 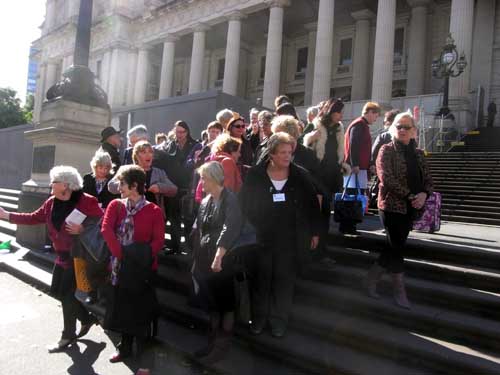 In the Victorian Government Apology for Past Forced Adoption Practices delivered by the Premier in October last year, we were promised that the Adoption Legislation of 1984 would be amended and that we would at long last have the same rights as others and be able to make contact with our lost sons and daughters. However, this has proved to be a hollow promise, with the Government introducing, without consultation with ARMS, ‘contact statements’ (ie vetoes) and criminal sanctions into the amendment. It was made abundantly clear to Minister Wooldridge prior to the Apology that no groups involved in the adoption community were in favour of vetoes.

When the Victorian Adoption Act 1984 was introduced it provided access to identifying information about birth parents for adopted people aged over 18, but not the other way around. Victoria was the only State in Australia in which mothers did not have the same basic human rights as others. The State apology for past adoption practices was a special occasion and the Government's pledge to legislate to right some of these wrongs was met with great hope. However the adoption bill currently in Parliament undermines this goodwill and completely undermines the spirit of the Apology. It was meant to be healing but instead has re-traumatised many women.

ARMs Secretary Jo Fraser said that all adoption community organizations representing hundreds of mothers who were pressured, like herself, into giving up their children are strongly opposed to Contact Statements and Contact Vetoes. Some states such as WA have stopped using them.

“Adopted people from the closed adoption system up to the mid1980s are now aged almost 30 through to over 60 years. We say that as adults they should be able to deal with contact in a mature and sensible way. Why should the Government feel it has to legislate to control a reunion between a mother and her son or daughter? These proposed amendments come between mother and child, insult her love and compassion for her child and deny her most basic human right of being able to know her own child.”


“To stop mothers and fathers contacting their children, even by writing a simple letter, is bad enough. But not to be consulted is doubly insulting. Who else has a more profound stake in this? I have met my child but I am heartbroken that contact statements may mean that others won’t ever have that joy.”

"The last line of the Victorian Apology said: 'We undertake to never forget what happened and to never repeat these practices', yet here we are a mere 6 months later having our rights, our hopes and our hearts trampled on again!"

ARMS (Vic) is seeking meetings with Premier Napthine and Minister Mary Wooldridge and calls upon the Upper House to show compassion, do what is right and vote for the rights of mothers and their adopted sons and daughters to meet without interfering contact orders and subsequent criminal sanctions.
For further comment please contact: