Australia has mandated a relatively steady average compound annual population growth of 1.6+% since 1901 combined with a relatively steady average compound annual GDP growth of 3.2+% since 1901. Inside I criticise Australia's most recent so-called Population inquiry, conducted by Tony Burke. Relatedly, I also ask you to sign a petition for a new population inquiry, which you can quickly find here: Australia requires a public inquiry to determine a basis for the optimum rate of population growth 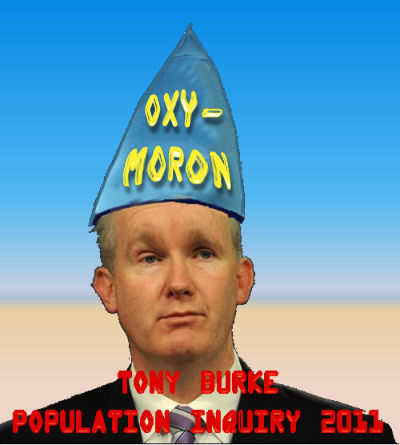 I am asking readers to forward the petition because it cannot grow if it is not forwarded.

Why do we need an optimum population inquiry for Australia?

Safety of personnel is the highest priority for such global corporations. Safety assessments are performed based on the reality of the finite resources an organisation has available to manage and implement its business strategy.

Risk assessments typically rate a particular risk based on both the likelihood of it occurring and the consequence. Where a Risk Assessment confirms that there is a catastrophic consequence (ie loss of life) and a high likelihood of that outcome (for example infant mortality in the developing world), then implementing mitigation measures would be deemed obligatory.

This is exactly the situation a country would find itself in if its population growth policy could clearly be demonstrated to reduce its ability to provide foreign aid for such mitigation measures.

A related question is: Why is Australia experiencing increasing public and private sector debt even with rapidly increasing population and manic exploitation of every natural resource that mining, oil and gas and farming operations can feasibly develop? Why also has the number of unemployed increased at a compound rate of 2.3% per annum over the last decade? Is rapid population growth a root cause of both of these outcomes?

From a macro perspective, if analysis of the rate of population growth in Australia showed that the cost of each additional Australian for the Australian economy is reducing Australia's profitability (for example due to increasing national debt) then it would follow that this is indirectly responsible for the loss of life of many people each year in the developing world, due to our reduced capacity to pay for foreign aid.

The environment is finite and this is a zero sum "game". The more pigs at the Australian trough gorging on excess, the more people die in the developing world?

This is one good reason why we need a Public Inquiry. There are many more; as outlined below.

Critique of Australia's most recent inquiry into population

See below my critique of Australia's most recent failed inquiry into population, as conducted by Tony Burke, a recent minister for Sustainability and Environment with the Gillard Government. The history of Burke's inquiry, readers may remember, followed on Gillard's remarks about not being keen on a big population. Gillard went on to preside over a continuing expansion of Australia's immigration program and this report sank without a trace.

My responses to Tony Burke's remarks highlight what appears to be an attempt to prop up a pro-growth status quo argument in denial of the facts, which continues a sad tradition of intellectual dishonesty in Australian government on the matter of population policy:

My comments in Italic Bold:

Box 3 – Why Australia does not have a population target

A number of submissions to the public consultation phase called for the Government to set a population target. Indeed, public discussion over the past 40 years has periodically called for a population ‘target’ to be set. The pressure to provide such a target is often based on a belief that there must be a measurable, finite limit to the capacity of the country to provide resources for its population. These debates have often been fuelled by the publication of possible projected population trends.

There are many aspects of population growth, such as changes in fertility rates, longevity, or emigration, that we cannot accurately predict nor directly control, especially beyond the immediate future.

Good points, but a long term average "target" has been achieved, whether by accident or by GDP chasing. That target has been 1.6+% compound average annual growth and has been tracked over the decades since 1901. 60% of population growth is currently due to net migration; which could possibly be modified to target a lower rate of growth. See http://candobetter.net/?q=node/3421. The target is currently to double population every 40 years; forever. This is not realistic.

Further, governments have limited practical tools through which they can influence population. Immigration is the most direct lever, but this is still limited in practicality (for example, migration from New Zealand, or the movement of Australians overseas or returning home). The adoption of a population target would also limit the use of the migration program as a policy lever to address emerging skills gaps and labour shortages.

It is clear that any perceived ‘optimum’ population is likely to change in the future due to changes in the way resources are used and developments in technology. Such developments may, for example, facilitate an increased water supply, greater yields in food production, and increasing take-up of alternative, renewable energy. As we strive for greater efficiency in consumption of resources, it follows that a larger number of people could be supported for the same consumption.

The future is endless. A relevant question is how long Australia wishes humanity to survive here and globally? The optimum population is clearly a stable population, because growth cannot continue indefinitely. By practicing a policy of extreme growth, the time available to develop technological solutions to the massive negative impacts of rapid growth is exponentially reduced. There is no way to double population every 40 years indefinitely – regardless of the extent of improved resource use and technological development. This creates a blueprint for an inherently unsustainable society - which is what we are now experiencing.

Improvements in urban planning and technology in the future also have the potential to change the way we live and work, reducing the external costs of population growth currently being experienced, such as traffic congestion. Hence, it is more useful for governments, businesses and communities to focus on ways of improving our wellbeing, protecting our environment and making better use of the resources we have, rather than trying to determine an absolute limit to our population and focussing efforts on restricting growth in order to not exceed this ‘limit’.

This is partly true, but there are limits. It doesn't make sense to propose that solutions can be developed to accommodate endless growth without addressing the potential for moderating the primary driver of this rapid growth (aka population growth). Chaotic expansion is not preferable to disciplined improvement.

Since the 1970s, all population inquiries sponsored by Australian governments have rejected the notion of a population target or national carrying capacity. Mandated population targets would typically be arbitrary, and impossible to deliver in practice.

In addition, setting such a target has the potential to distract attention from addressing the challenges presented by other aspects of population change, including location, age and skill composition.

Many of the distractions in Australia today are CAUSED by the rapid rate of population growth…….!

Population projections are illustrations of what the population might look like, on the basis of various assumptions about mortality, fertility and migration. These are generally based on past trends, and at best should be seen only as rough guides to the direction of current population movement. For example, if assumptions about fertility do not eventuate, then projections are likely to be quite different to actual population numbers, particularly in the medium to long-term.

So, rather than setting a target, the central objective of this Strategy is to lay the platform for a more sustainable Australia. In contrast to relying on long term projections, this can be better achieved by managing the impacts of all aspects of our current population, closely monitoring migration levels, and using population projections for the short to medium term to plan and prepare for our population’s needs in the future.

There has been a consistent "target" since 1901. The problem is that this target is clearly far too high by developed world (or any other) standards, and therefore requires critical review. This document is paying lip service to the task at hand rather than recognising the need for performing ongoing comprehensive review that ensures we are on the right track.......... It is an oxymoron to talk about sustainability in the context of a population growth rate comparable to those of the most underdeveloped and environmentally degraded developing-world dictatorships on earth.

[1] All the global growth rates are from the CIA World Factbook. All data on OECD population and GDP growth rates were from this source and were compared to actual ABS data for 2012.