“[If the] root cause of the current crisis was post-Soviet Western triumphalism that resulted in the rapid and inexorable growth of NATO and the EU, then current NATO deployments all over eastern Europe will confirm for even previously sceptical Russians that the 20-year old complaint about NATO expansion was a prescient one. 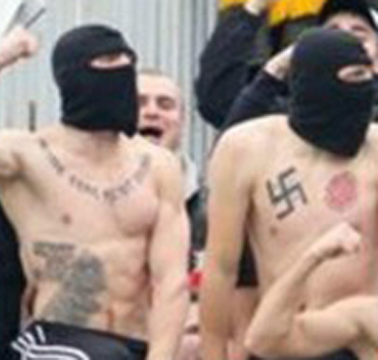 See also: Steven Seagal plays at concert for pro-Russia separatists in Ukraine, 10 August in the Guardian. This article is republished from Global Research article of 11 August. The New York Times article linked to below is here. - Ed 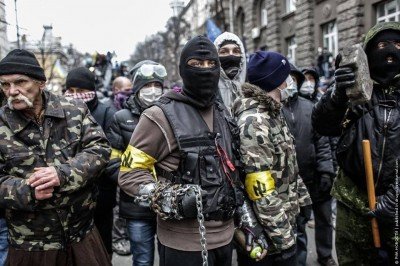 The New York Times reported almost in passing on Sunday that the Ukrainian government's offensive against ethnic Russian rebels in the east has unleashed far-right paramilitary militias that have even raised a neo-Nazi banner over the conquered town of Marinka, just west of the rebel stronghold of Donetsk.

That might seem like a big story – a U.S.-backed military operation, which has inflicted thousands of mostly civilian casualties, is being spearheaded by neo-Nazis. But the consistent pattern of the mainstream U.S. news media has been – since the start of the Ukraine crisis – to white-out the role of Ukraine's brown-shirts.

Only occasionally is the word "neo-Nazi" mentioned and usually in the context of dismissing this inconvenient truth as "Russian propaganda." Yet the reality has been that neo-Nazis played a key role in the violent overthrow of elected President Viktor Yanukovych last February as well as in the subsequent coup regime holding power in Kiev and now in the eastern offensive.

Despite clear evidence available to any internet user as eye-witness film of pro-Kiev radical junta supporters (called the 'Kiev Government' by western press) setting Odessa’s Trade Union headquarters ablaze after they had blocked the exit, and beating up people who managed to get out, and shooting at the people from the anti-government tent camp who barricaded themselves inside the building, most Western mainstream media is pretending they do not know what actually happened in this Western-backed atrocity. Are they counting on our misplaced respect for mainstream media authority to make us close our eyes? [Candobetter editor's note: Thank you to an alert reader who pointed out the artist's careless mistake in mistaking the Swedish flag for the Ukraine flag, in the illustration. This has been rectified.]

This article by Andrew Korybko was first published on Global Research on 27 April 2014 with the title "Destabilization Training": Poland Trained Ukrainian Neo-Nazi Militants Ahead of EuroMaidan Riots.
See also: Neo-Nazis march in Lvov 'in honor' of Ukrainian Waffen SS division (with photos) (28/4/2014),
About massacres of ethnic Poles in Ukraine by nazi collaborators during the Second World War: Massacres of Poles in Volhynia and Eastern Galicia, The Massacre of Poles in Volhynia: Lessons for Ukraine (15/7/2011), Massacre at Volhynia: Remembering the victims (27/3/2013).

Polish media outlet Nie has published a bombshell account about direct Polish involvement in Ukraine's destabilization. Its source alleges that the Polish Foreign Ministry had invited Ukrainian militants into the country and trained them outside of Warsaw in September 2013. 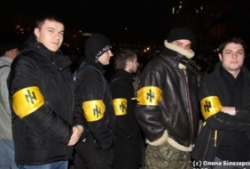 Candobetter editorial comment: Modern history since the time of the Second World War is full of paradoxes.
No other people have suffered as much at the hands of the German Nazis as the Jews and the Poles. Yet, Israeli soldiers and, as this article shows, Polish military instructors, helped the Ukrainian neo-nazis to destabilise the elected Government of President Viktor Yanukovych and overthrow it in the putsch of 22 February 2014.
It remains to be seen if the Polish people will also allow their country to be used as a launching pad by the 600 United State paratroopers who recently arrived in Poland to help the neo-nazis against the people of Ukraine and Russia.