Australian medical novelist, Kathryn Fox's writing shows more interest in the lives of victims of crime than in the gruesome details of their deaths. Her obvious social conscience and real sensitivity makes other forensic crime writers, like Patricia Cornwell and Kathy Reichs, look like teen-age necrophiliacs.

Kathryn Fox is different. One is educated about society in her novels. Her most recent novel,
Fatal Impact set in Tasmania, an island which is the southernmost point of Australia, has developed beyond the social, into the political. 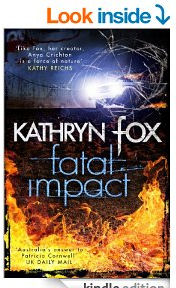 With ongoing news of the growth lobby's entrenchment in Tasmania, I was sensitized to the major topic, which was the Chinese takeover of agricultural land in Tasmania, aided and abetted by Australian politicians and property dealers. (Is there any difference?) Fox even cites the problems in Australia's Foreign Mergers and Acquisitions Law.

Australians know and are worried about the selling off agricultural land on the mainland and in Tasmania, but only the organisations that lead the growth lobby, such as the Property Council of Australia and the State government executives can be aware of the design and extent of this dispossession and our disempowerment.

Kathryn Fox's characters find out more than you and I can, and you have to wonder whether this doctor-author, who has real-live experience in criminal investigations, knows more than most of us about the selling off of Australia. If she does, she is doing Tasmanians and other Australians a favour in outing the intrinsic sociopathy of the politicians who are selling off Australia piece by piece in a covertly planned and publicly defiant operation that goes right up to the office of prime minister and beyond, since it is international. See "Bad Australian Foreign Investment Laws marginalise Australians", National Foreign Investment Review Board (NFIRB) and "Foreign ownership".

The book also integrates information from recent reports on European studies of the longer-than-3 months effects of genetic Engineering and applies them to its human characters. The actual reports her fictitious ones seem to be based on were about Monsanto and Roundup and led to the complete banning of genetic engineering of farm crops in France and other parts of continental Europe. See "France: Rats fed GM foods for two years massive increase in tumours and death." In 2012, this ban was reversed by the European Union which can override French law. The scientist whose study drew attention to Roundup has suffered predictably for his courage and you can read more in this article: "150 Global Scientists Condemn Retraction of Seralini GM Maize Study".

In fact, the problems we are actually looking at with loss of self-government to foreign occupation, and with mainstream media too invested in food and drugs to report on the problems of genetic engineering and other aspects of totally industrialised food chains, are so awful and involve such powerful forces that it seems that the only way they can be pursued safely is via a novel.

I commend Kathryn Fox for developing the forensic pathology novel into a forensic political pathology novel and for attempting to educate Australians who might otherwise not be aware of some major issues affecting this country.

I also highly recommend all her novels, mostly set in Australia.

The Foreign Investment Review Board (of Australia) www.firb.gov.au
"The Government also recognises community concerns about foreign ownership of certain Australian assets. The review system allows the Government to consider these concerns when assessing Australia’s national interest.
The national interest test also recognises the importance of Australia’s market-based system, where companies are responsive to shareholders and where investment and sales decisions are driven by market forces rather than external strategic or non-commercial considerations." Source: Australia's Foreign Investment Policy (2013) http://www.firb.gov.au/content/policy.asp?NavID=1