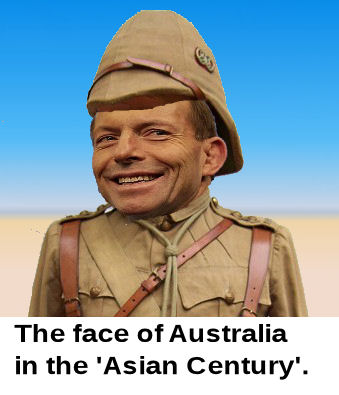 Asian populations grow at varying rates, depending on the level of development and the rates of natural births and deaths. None of these countries subject their people to mass migration as a tool to drive GDP growth in irrational contempt for the social, environmental and economic consequences.

Australia is a dishonest, hypocritical country built on a lie that government media fully supports while it preaches about humanity and the environment.

The death cult of Migration Assured Destruction is alive and well in Australia. Even the US example of how to screw up a country is not enough to educate Australia’s ruling class. This is a unique recipe for a cock up.

The premise of most demographic gurus is that population growth will slow as developing countries become wealthy. If that is true, then why does Australia deliberately drive population growth rates as high as those of some of the most underdeveloped areas of Africa and roughly 4 times the OECD country average? It certainly isn't about prioritising refugee intake.

Australia is an insult to the intelligence of most Australians. The primary responsibility for this reckless stupidity lies with both Government and its tool the ABC; both of whom are beyond the control of the Australian people.

There is no democracy in Australia when it comes to open public policy debate of population growth management and maximising Australia's potential to act humanely and sustainably both at home and abroad. It's just not up for discussion; and that is the essence of what Australia's autocratic "death cult" is all about. Cut philanthropic aid at home and abroad and destroy the environment; all in the name of profit - otherwise misdescribed as "economic growth".

"This article highlights how the ABC misled the Australian public, and Australian politicians, about the Carbon Tax in the lead up to passing of the legislation in November 2011. Tony Jones shows clear understanding that net emissions growth is the real issue (in China) but doesn't question Julia Gillard when she says a Carbon Tax will "cut carbon pollution" when facts prove a net increase will occur in Australia. QANDA bias is proven. Has the ABC done such a good job omitting the primary cause of emissions growth that nobody even understands it has happened?"

The truth was that there would be a net increase of as much as 30 million tonnes, even if the hypothetical target for the Carbon Tax reduction measures was achieved. It was the ABC's responsibility, in the public interest, to ensure that this was understood by its audience. The ABC did nothing of the kind, despite having full access to the facts.

"To have a debate based on the science, people have to show respect for the scientists and I think one of the worst features of what has been a long, divisive debate in our country is the lack of respect shown to the scientists....."

For Gillard the only science she was talking about was the evidence that more carbon in the atmosphere contributes to climate change. But all the other relevant, Australia-specific, science I have referred to above has been selectively ignored. "Cherry-picking" one part of the science and ignoring the rest is disrespectfully unscientific.

Just to remind us of what science is, consider these definitions:

QANDA has never addressed any of the above-mentioned inextricably related scientific facts when broadcasting on Australia's climate change response options; and did not on this occasion. Why?

The choreographed omission of these issues from audience participation was evident.

"Aiming to equip audiences to make up their own minds is consistent with the public service character of the ABC. A democratic society depends on diverse sources of reliable information and contending opinions."

"A commitment to accuracy includes a willingness to correct errors and clarify ambiguous or otherwise misleading information. Swift correction can reduce harmful reliance on inaccurate information, especially given content can be quickly, widely and permanently disseminated. Corrections and clarifications can contribute to achieving fairness and impartiality."

For years the ABC has refused to formally apologise for its misconduct. This must occur, regardless of how long its takes for legitimate conduct to overcome past misconduct.

"The ABC takes no editorial stance other than its commitment to fundamental democratic principles including the rule of law, freedom of speech and religion, parliamentary democracy and equality of opportunity."

"Fair and honest dealing is essential to maintaining trust with audiences and with those who participate in or are otherwise directly affected by ABC content."

Time Slot 28.20
Listen to this and you will hear Tony Jones explain that he understands exactly the issue he is omitting from the discussion with Julia Gillard. He says at Time Slot 30.17:

"That's the problem isn't it. There are not overall less or fewer emissions (in China due to alternative energy usage). Overall their emissions are growing rapidly."

He applies the logic to China, but then doesn't mention its relevance to Australia? He talks about overall emissions in China growing rapidly, but watches Gillard repeatedly talk of "cutting emissions by 160 million tonnes" and makes no comment about Australian emissions being expected to continue to rise rapidly due to ongoing extreme population growth and chaotic expansion of our carbon based economy?

Note also that the decline in economic Key Performance Indicators all point to extreme population growth as a culprit, yet the ABC never mentions these facts. The ABC has direct access to all these facts. ABS Statistics Government must address

The "Thank You For Saving Us" segments from young and old. Note how QANDA has placed the grateful child at the end of the show:
Time slot: 20.14
Time slot: 56.40

The youthful plea was followed by another iteration by Julia Gillard of the myth about "cutting 160 million tonnes of carbon pollution" in 2020.

QANDA has either been deliberately pro-Carbon Tax and pro-Population Growth biased in breach of its Statutory Duty, or cannot understand that it has been biased. It doesn't matter whether it was intentional or not. Manslaughter or murder; what's the difference to "the issue that has been killed" in breach of the public interest?

This misconduct by the ABC can be traced back to before 2008 and has arguably been an attack on the Australian people with the following consequences:

In summary, the outcomes of ABC misconduct arguably bear similarities to those of organised crime.