Lib Candidate David Leyonhjelm says Northern NSW koalas are not endangered by logging. Animal lawyer, Angela Pollard, says, "Logging density has doubled, with an extra 140,000 ha of coastal forests targeted for clear-felling. She adds that the previous protections on retaining mature trees have also been removed, and this impacts most severely on the koalas’ main source of food tree. The new logging rules also remove the requirement to check for koalas in the canopy before a tree is felled."

“There is no evidence that koala populations are in decline in northern NSW,” he says

In the press release, it is further claimed that "An extensive research effort undertaken by the Department of Primary Industries over three years has shown that koala occupancy was influenced by elevation, cover of important browse trees, site productivity and the extent of bushfires in the last ten years. Previous timber harvesting did not influence koala occupancy with no difference between heavily harvested, lightly harvested and old growth sites. The study also found evidence that the koala population in north-east forests was ten times higher than previously estimated."

Leyonhjelm's press release claims that research undertaken by the Department of Primary Industries is independent, however most wildlife protection groups would say that it is anything but.

"I'd be paying more attention to the research undertaken by North Coast environmental campaigner Dailan Pugh who received the Order of Australia Medal for his services to forest conservation, rather than a politician cosying up with the timber industry," she says. Dailan Pugh cites a number of studies addressing the reduction in koala numbers across the east coast and he questions the validity of DPI Forestry's acoustic recording of koala calls as opposed to reliance upon the standard method of checking for scats [droppings] under koala food trees. On reading these studies (Is_Logging_Really_Benign_For_Koalas_as_DPI_Forestry_Claim.pdf), it is abundantly clear that the felling of large koala food trees has had a major impact on koala numbers on the north east coast."

"Just as concerning is the impact that the Berejiklian Government's new logging rules are already having on koalas. Logging density has doubled, with an extra 140,000 ha of coastal forests targeted for clear-felling. The previous protections on retaining mature trees have also been removed, and this impacts most severely on the koalas’ main source of food tree. Horrifyingly, the new logging rules also remove the requirement to check for koalas in the canopy before a tree is felled."


"In order for north coast koalas to survive into the future, we need to recognise that the time for logging of our state forests is over. They have already been plundered, with their best timbers already taken and now we are taking smaller and smaller trees, which are of limited to no use for koalas. We are creating wildlife deserts where we should be providing havens for our native animals."

Meanwhile, Mr Leyonhjelm is trying to justify logging koala habitat with the Department of Primary Industry's (Koala research in NSW forests study, which Leyonhjelm claims, “undermines both Labors’ and environmental groups’ rationale for closing down the timber industry in northern NSW by creating this large new park,” Mr Leyonhjelm says.

But wildlife activists think that the Department of Industry has a highly conflicted portfolio.

Today at the Australian Wildlife Protection Council AGM I interviewed Craig Thomson, Animalia wildlife carer, about the events that may have led to Sean the Koala travelling down a busy highway in Langwarrin. Turns out he was probably following a traditional migratory route of male koalas in search of romance, which takes them from islands of habitat like the Cranbourne Botanical Gardens, down four-lane highways towards The Pines Flora and Fauna Reserve in Frankston, or further south, across the massive Peninsula Link tollway that cuts the Peninsula in half. Why are koalas being forced onto highways? It is another terrible cost of the unwanted human population expansion that is being forced on Victorians by the State Government, in its bid to grow Melbourne faster and faster. Animalia has $10,000 outstanding power bills; you can help by donating to WESTPAC BANK BSB 033138 Account 434072

The President of Animalia, Michelle Thomas, actually rescued Sean the Koala, but has received little credit. Instead, Wildlife Victoria is often erroneously named as the rescuing agency. In the mean time Animalia owes $10,000 in utility bills alone and the wildife carers wonder how they are going to keep going without donations. So please consider donating to WESTPAC BANK BSB 033138 Account 434072.

The photograph of a koala being carried away from a multi-lane highway by a resourceful and kind truck driver comes from South Australia, but the situation of koalas crossing dangerous roads is all too frequent. 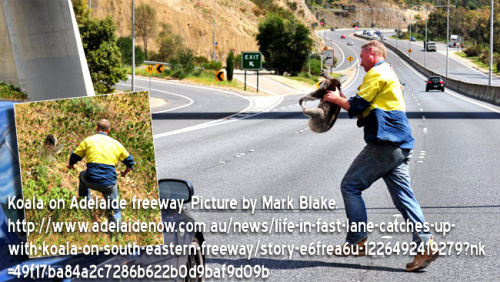