There have been many news headlines about an article in the Lancet, "Population and fertility by age and sex for 195 countries and territories, 1950–2017: a systematic analysis for the Global Burden of Disease Study 2017."

The news reports on this paper are hyperbolic - quite unwarranted. Why have they picked up on this article, which contributes less than others to the Lancet's special issue on "global burden of disease"? Just an excuse to trot out the 'birth dearth' scaremongering stories, I guess.

The paper itself presents no more than a methodological tweek on how global population data are collated. It's relation to "global burden of disease" is just to ask "how do we calculate the denominator?"
The only real news (which I gleaned from a table, not commented on in the paper) is that Global Population in 2017 was probably even bigger than UN's last estimate, by maybe 90 million! [1] Yet all that gets reported is concern about too few births!

So why not a headline like "There are 90 million more people on Earth than previously thought"?

No, they have to pick up on the entirely un-newsworthy fact that nearly half the world's countries have 'below replacement' birth rates. The problem is, many of the others are far more above replacement than the low-fertility countries are below it.

Even then they misreport it.

Science Daily says, "Ninety-one nations are not producing enough children to maintain their current populations." This is almost certainly incorrect. If you've got a relatively young age profile, then at replacement rate fertility you're still producing many more babies than needed to maintain the current population. The population will grow by momentum (filling up the age cohorts) before levelling off. So this is a factually incorrect statement.
https://www.sciencedaily.com/releases/2018/11/181108205327.htm

BBC headline is, "Remarkable' decline in fertility rates".
What the data in that paper makes clear is that the uncertainty around global fertility rate means that we can't say for sure whether fertility has declined at all over the past decade. Why do they keep referring to the decline of 40 years ago, and pretend it's 'remarkable', without showing the slightest concern for that decline stalling more recently?
https://www.bbc.com/news/health-46118103#

UK's Channel 4 says "There has been a dramatic global decline in the number of children being born, researchers have revealed." Well, these researchers revealed nothing, but one of their charts showed (as the UN data had done before them) that the past 5 years have recorded the highest number of births in Earth's history. So even the "remarkable decline in fertility rates" has not translated into a decline in number of births, dramatic or otherwise, due to the vast increase in number of mothers.

Don't you just love the media?

Out of interest, past UN estimates for the year 2017 are (in thousands):

Unfortunately the Lancet publication presents multi-page tables with the caption at the bottom, and insufficient labelling of the column headings to actually know what the data in the table represent until you've scrolled down to the caption.

Syrian women are helping to save Syria and all of humanity against the scourge of Western-supported terrorism. The Canadian government, [Candobetter.net editor: and others, including Australia's, supporting the US-NATO agenda] on the other hand, is destroying women’s rights (and all human rights) in Syria and beyond.  If the truth were ever accepted by broad-based populations, then our government, led by those who project progressive fronts, would be exposed as the misogynist, life-hating rot that it is.

This article was first published at https://www.globalresearch.ca/womens-rights-in-syria/5629648

Trudeau is destroying Syria through illegal sanctions, and through direct and indirect support of every single terrorist in Syria. Canada is a member of the NATO terror organization, which along with its allies, seeks to create “regime change” in Syria, — the highest crime according to Nuremburg Principles.

All Syrians, but especially Syrian women, have much to lose if the Canadian government’s diabolical ambitions are realized.

The government supports women’s right and liberty before and now. We have the liberty to choose our work , to wear whatever we like , to choose the type of education we want and even to fight side by side with the army. We have the safety to go at anytime during day or night.

She also explains that

men now are busy fighting with the army or trying hard to work double shift after the crazy raise of prices and after the sanctions. Women’s life as the life of all Syrian has been affected badly by the sanctions. The prices of food and vegetables have become double. Medicine prices are very high and some are not available.

Life in terrorist-occupied areas, however, is entirely different, and alien to Syria and to most Syrians. Ashy explains that

women in the areas controlled by the US- backed terrorists have no rights at all. They have to wear a black uniforms to cover their bodies and this uniform must be very simple and loose and if any women try to break their rules they take them to Hespah (prison). They keep them imprisoned for hours and force them to buy a uniform that they have and agree on … Women are prevented from going to schools or working any kind of job that they don’t approve of.

Ashy adds that the government respects freedom of thinking and religion and that nobody has the right to interfere in someone’s religion. 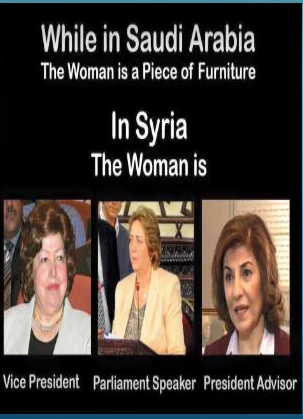 Saudi Arabia, one of Canada’s allies in the war for terrorism and against human rights is both a fountainhead of terrorism and Wahhabism, and it is this Wahhabi ideology that prevails in terrorist-occupied areas of Syria.  It is also this Wahhabi ideology (takfiri/salafi) that is referenced in a 2012 DIA document[2] (14-L-0052/DIA/287) which laid out clearly the West’s plans to destroy Syria, one of the 7 countries targeted for destruction as enumerated by General Flynn.

As the U.S and its terrorist allies occupy the oil rich areas of Eastern Syria – also laid out in the aforementioned DIA document — Canadians should remember that this war, like its predecessors in Libya, Iraq and beyond, was sold to them and continues to be sold to them through outrageous, constantly repeated, war lies.

[1]Amany Ashy is a pseudonym for an actual Syrian source. She shared her narrative in a private Facebook message dated 2 October, 2017.

Taliano talks and listens to the people of Syria. He reveals the courage and resilience of a Nation and its people in their day to day lives, after more than six years of US-NATO sponsored terrorism and three years of US “peacemaking” airstrikes.

Mark Taliano combines years of research with on-the-ground observations to present an informed and well-documented analysis that refutes  the mainstream media narratives on Syria.

In this Crosstalk interview by Peter Lavalle with journalist, Pepe Escobar, and economist, Martin Hennecke, the point is made that after 9-11 in 2001, the United States 'took its eye off the ball' to concentrate on the 'war on terror'. Now all it has is the war on terror, but while its attention has been focused on war for 13 years, China and Russia have made many new alliances with the BRICs countries and the future looks better for China and Russia than for the NATO group and its allies. Also criticism of the European and Anglophone press as fixated on personalities and imagined agendas to the exclusion of practical reality. Compares austerity debt in Europe to debt in China and Russia (very low). Refers to evolution away from the petrodollar