This little-known documentary contains rare and compelling footage of Greek villages and Greek partisans during World War 2. It also interviews male and female partisans who survived a series of international betrayals. In 1940 Mussolini attacked Greece from its colony of Albania. The attack was repulsed and the Greeks conquered one third of Albania in their counter attacks. At the time, Greece was Britain's only ally against Nazi Germany in Europe. (France Belgium, Norway, Denmark, Luxumbourg had all been conquered.) Four years later, Britain savagely turned on the same heroic Greeks who had resisted the Italians and subsequently fought against their Nazi German-allied occupiers. It was only possible for the British to succeed because the communist ELAS-Partisans trusted the Greek Communist Party (KKE).

This provoked a ferocious fightback against the British by the ELAS-Partisans. So fierce was their fight that the British were forced to get reinforcements from the Italian front and from Belgium, where they were fighting the German Ardennes offensive. However, the communist Greek KKE, under Stalin's orders, then agreed to completely disarm and return to their homes in the suburbs of Athens and elsewhere. This was under the pretext of recognising the British puppet forces as the legitimate national Greek army.

In the suburbs of Athens many former ELAS fighters became victims of gangs of former collaborators. Many ELAS fighters were imprisoned by the British and their puppets.

Order The Kapetanios (1772) by Dominique Eudes from Monthly Review Press for US$20.00 + postage. 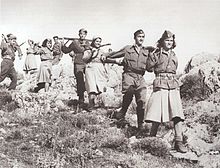 This was originally posted to the ABC Radio National Rear Vision website on 17 July 2011 as a comment in response to a documentary "Greek Tragedy". This article was originally posted to candobetter, but not on the front page, on 14 Nov 2014. See also: IMF vs Greece: History of the Greek Civil War (part iii) and Episode 055 (6/12/14 - 25 min) of Sputnik by George Galloway on RT.#fnGCW1" id="fnGCW1txt"> 2

One of the placards at the mass Greek protests in October 1944 against the British read: "The Germans are back".

Patriotic Greeks could have so easily beaten the British and the former German collaborators in the war of 1944 and the subsequent civil war from 1946-1949 if they were not so appallingly misled by the Greek Communist Party (KKE).

For a truthful account of the Greek Civil War please read "The Kapetanios - Partisans and the Civil War in Greece, 1943-1949" written in 1973 by Frenchman Dominique Eudes. Copies can be order from The Monthly Review Press, "Alibris, or Amazon

Update, 31 dec 2014: The transcript of the program, copied from the ABC Radio National page, to which the above is a response, has been moved to this page. An excerpt is below in #appendix1">Appendix 1 - JS

"Greece fought the Italians and then the Germans during World War II and when the war ended in 1945, a bitter civil war between communists and anti-communists, ultimately won by the right, created social tensions that would last in Greece for the next 30 years. Dr David Close is a historian in the School of International Studies at Flinders University."

David Close: "1945 was Year Zero in Greece, like in much of Europe, because under the German occupation everything had been destroyed: the whole economic system, the physical infrastructure, the political system. The Germans had encouraged a growing civil war, as well, which got worse in the few years after the war. The driving force was a pro-soviet communist party, which grew very powerful under the German occupation, because it dominated the Resistance. And the opposing forces were backed first by the British and then by the Americans, and American backing enabled them to triumph in the end, so they won a decisive victory in 1949."

James Sinnamon's comment: The principle 'driving force' of the Greek Civil war was not the Greek Communist Party (KKE). It was the British Army led by General Scobie and Greeks who had collaborated with the Nazi collaborators.

Josef Stalin had instructed the KKE to welcome his British allies as liberators and to follow their instructions. After they landed the British demanded that the partisans disarm. The Greek Communist Party leaders did their utmost to ensure that resistance fighters disarmed. For its part, the British army protected former collaborators from a vengeful Greek population, claiming to have put them in custody, whilst secretly re-arming them.

This made possible the bloody civil war which was won by the fascists. This defeat caused Greece to remain a dictatorship for more than three more decades. As Nana Mouskouri explained tonight on Q and A, parliamentary rule was not re-established until 1975.

Appendix 2: Other pages about the Greek Civil War

#fnGCW1">1#fnGCW1txt"> ↑ The Greek Civil War is discussed in the first half of that episode of Sputnik. In that segment Galloway interviews Judy Cotter, a British woman, who as a student activist in 1973, courageously helped Greek students being imprisoned and tortured by the Greek military junta. That was the same junta which came to power in 1944 as a result of the betrayal of the resistance fighters in 1944 by Stalin and Churchill. The above article was also posted as a comment on Jan 2014 to Sputnik.

#fnGCW2">2#fnGCW2txt"> ↑ George Galloway's Sputnik program on RT should not be confused with the Russian Sputnik International web-site.