Long term Aussie Residents, including many who have constructed their own park cabins, and are exemplary for living a sustainable lifestyle on limited means, now face the full onslaught of Chinese demographic and economic imperialism acquiesced to by Liberal, Labor and Green politicians. (This article comes from a member of Australia First and Candobetter.net is publishing it because Australia First is attempting to represent these Wantirna Caravan Park residents in its program to support relocalisation and a small population in Australia.) 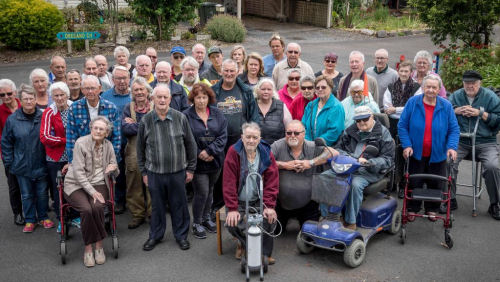 Chinese purchasers, apparently lacking feeling for the caravan park, or its natural outlook which enhances the local area, want to exploit the land for building and $$$$ speculating on 294 dogbox houses. On current trends they are likely to be sold to prospective Chinese immigrants in the continuation of the large stream we are already experiencing. In this way incoming immigrants will displace the caravan park residents.

Stiff luck to Aussie Residents who are to be booted out to make way!

This abysmal treatment of dispossession results from the politicians opening the floodgates for foreign “investments.”
It is even rumoured that a Liberal Party Chinese Branch for local Deakin Electorate is likely to be formed to enhance support from Chinese money.

Australia First says Stand up for Aussies - No Exceptions! And, no dispossession of Caravan Park residents.

Support the Australia First Petition directing political representatives to
[I] refrain from any redevelopment permits, and
[ii] for Legislation to compulsory acquire the Wantirna Caravan Park for Public Housing Land, under co-operative management including by existing Residents, and
[iii] close down foreign money buying out our Australia. 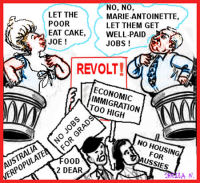 Some recent comments reproduced here. Please contribute more. Joe Hockey seems like a nice guy, an intelligent guy, but he's just too rich to be really useful to anyone who isn't. He reminds me of Marie-Antoinette, a foreign princess who didn't want to try to understand the problems of the people and her husband. People look back and say, "How could she be so silly? Couldn't she see that the people were angry and desperate?" But, you know, she had other priorities. 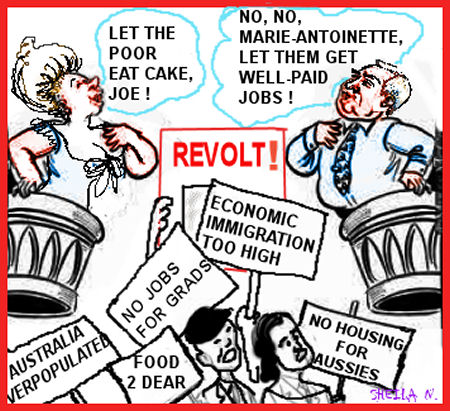 He declared that "If you've got a good job and it pays good money and you have security in relation to that job, then you can go to the bank and you can borrow money and that's readily affordable". The fact that wages are not keeping up with house prices is being ignored by this buffoon, and shows just how callous and out of touch our arrogant politicians really are!

Mr Hockey made the comment at media conference in Sydney where he was being asked about rising housing prices across the country, especially in Sydney and Melbourne. He denied that housing in Sydney had become unaffordable, particularly for new entrants into the property market. Just wonder how the normal people are actually able to communicate with our leaders, in their ivory towers of affluence. How many houses must our politicians have? They just watch their profits increasing, while the masses are struggling to meet mortgage payments, or are thrown onto the streets. Older people now are in danger of homelessness, due to pension cuts and soaring housing and costs of living.

The Treasurer said rising house prices were a good thing because they enabled owners to borrow against the equity to fund new spending. After decades of paying off a house, or even part of it, how are they to see it eaten away with reverse mortgages? Houses can't be used to pay water, Council rates, electricity and everyday expenses!

Joe Hockey and Tony Abbott are skating on thin ice with their defence of stratospheric house prices especially in Sydney. Another Liberal politician, Craig Laundy has defended Joe Hockey's recent remarks on the subject and advised the public that now is a good time to get into the property market. What happens if someone takes on a mortgage which he can just afford and then interest rates rise and he can no longer cover the repayments? Does the government bear any of the responsibility? Abbott said that he wanted prices in Sydney to rise because he has a property there (mortgaged). He is far from disinterested. Hockey says housing is not unaffordable because people are buying but that the answer to the problem that apparently is not a problem is to "build, build, build". He must know that the problem is shortage of land , land land in relation to the huge numbers of people, people, people needing housing in the areas where people want to live. He knows that the average person can only buy where land is cheap or buy in more expensive areas but have little or no land. Members of the government are skating on thin ice because they appear to be interfering in the housing market. Isn't their dictum to let markets be free? They also appear to be giving advice and to have their own interests in the asset case in which they are giving advice to the public. What they need to do is take on the responsibility of a housing safety net. This means "public housing, public housing, public housing!"