Token efforts by retailers, such as the ten-cent increase to $1-per-litre milk announced under duress in February by duopoly Coles and Woolworths, do not work. The retailers passed on 1.4 cents of that increase to producers, with some processors passing on additional portions, but this miniscule amount made little overall difference to the industry. Supermarkets increased their home brand milk by a further ten cents again in July, due to “whole-of-market cost pressures”, but this rise was not passed onto producers. Nor will government handouts change the trajectory the industry is on.

Senator Hanson’s withdrawal of support for non-urgent parliamentary votes until action is taken, could have a major impact on the government’s agenda, given her position as a cross bencher. She plans to table legislation to regulate the dairy industry in the current parliamentary sitting. Senator Hanson proposed action to save the industry in September 2018, receiving support only from the cross-bench. The same proposal tabled on 15 October as an Urgency Motion, however, received the support of Labor and the Greens, but was opposed by the Liberal-National coalition and the Centre Alliance, resulting in a 30-30 vote.

With input costs increasing—including water and electricity costs, chemicals, and given the drought, especially feed costs—farmers need at least an extra 40 cents per litre to survive. Only the weight of federal legislation can force both retailers and middle men in the industry to pay a price that will ensure the continuation and growth of a critical component of our food security. Currently it is left to market forces, but with a highly perishable product, dairy farmers have no bargaining power—they can’t hold out for higher prices. And despite consumers being willing to pay more to sustain our milk production, no market mechanism will carry that through from retailer to producer. Legislating a minimum farmgate price, based on parity pricing—the price which covers farm inputs plus a margin of profit—will ensure farmers can remain dairying and sustain a vital national industry rather than joining the dole queues.

“I don’t get it. What is Coles’ agenda? … and what is the government’s agenda?” demanded Greenmount dairy farmer Scott Priebbenow, speaking with Alan Jones on Sky News on 8 October. With so many farmers leaving the industry or hanging on by a thread, and a government assistance fund not due to be disbursed until July next year, the government’s inaction is inexcusable, he insisted.

The agenda is to advance a handful of corporate players at the expense of the masses. The commitment of both major parties to an economic policy consensus consisting of privatisation, stripping of regulation, market liberalisation and austerity, has destroyed Australia’s productive industries and family farms but boosted big banks and big business. The policies were devised by a global coalition of some 150 thinktanks planted worldwide by the secretive Mont Pelerin Society founded in 1947. Championed by Margaret Thatcher, the approach was unveiled at the 1978 British Conservative Party National Conference by Linda Whetstone, the daughter of leading MPS figure Antony Fisher, who as a devotee of Austrian School economist and MPS founder Friedrich von Hayek co-founded the Institute of Economic Affairs (IEA), the world’s leading MPS thinktank. Gunning for austerity and the stripping of countless pieces of legislation, Whetstone declared: “Don’t let’s go out of our way to help small business, agriculture, the unions, coloured people, women … we cannot help those who cannot help themselves at the moment”.

In Australia the takedown of the productive sector started in earnest under the Hawke and Keating governments. It was directed by four Australian MPS thinktanks: the Centre for Independent Studies (CIS), which von Hayek personally had a role in launching and running; the Institute of Public Affairs (IPA); the Tasman Institute; and the H.R. Nicholls Society, whose boards overlap the big four banks and big business. Described by the Sydney Morning Herald in 2003 as “the most successful, if unheralded, political puppet-master of the past century”, von Hayek himself observed that the most decisive influence over policy “was wielded by intellectuals”, not politicians.

Former Treasurer Joe Hockey exemplified the real agenda of the “free market” and “competition policy”—to provide an advantage to corporate interests, especially monopolies and cartels. “[W]ealth and prosperity are created by the private sector” and governments must not get in the way, Hockey told the Centre for Independent Studies in November 2013. On the other hand, the masses will have to lower their living standards, and the “political challenge will be to convince the electorate of the need for fiscal pain”, he said in his infamous August 2012 “End of Entitlement” speech to the IEA in London.

The tragedy is, there is a massive market for all of Australia’s dairy production and more, just waiting for us to develop our capability to service it. If the free market functioned as advertised, we would already have taken advantage of the mammoth demand from China and other Asian nations for our milk products. Since a 2008 milk contamination crisis, demand from China for Australian infant formula, for instance, has grown dramatically. While there is strict Chinese regulation to comply with (excluding e-commerce sales on a smaller scale), a number of Australian companies are already profiting handsomely from expanded exports of powdered milk into the country. With a modicum of government facilitation, Australia’s dairy production could take off exponentially. It must begin with re-regulation, however, because if we don’t stop corporations ripping off our farmers soon there won’t be an industry in existence.

This article was at first a comment. Thanks, Matilda B. Emphasis added by me. - Editor

Dairy has been reported to increase the risk of developing prostate cancer in numerous studies. Billions of people throughout the world do not consume excess dairy after weaning and have strong bones, and Westerners eating large amounts of dairy and calcium supplements are not less likely to develop osteoporosis. Plus, dairy products can be high in saturated fat as well as retinol (vitamin A), which at high levels can paradoxically weaken bones.

Plus, critics say, cow’s milk is designed for, well, calves.

Although the calcium and protein in milk are important nutrients, proof that dairy sources of calcium are required for strong bones is weak. Populations that eat little or no dairy do not have higher rates of osteoporosis. A low-fat vegetarian diet that eliminates dairy products, in combination with exercise, smoking cessation, and stress management, can not only prevent heart disease, but may also reverse it.

Epidemiological studies of various countries show a strong correlation between the use of dairy products and the incidence of insulin-dependent diabetes. Researchers in 1992 found that a specific dairy protein sparks an auto-immune reaction, which is believed to be what destroys the insulin-producing cells of the pancreas.
The study, led by Dr Honglei Chen of the Department of Nutrition at the Harvard School of Public Health in Massachusetts, found that dietary intake of dairy products is associated with an increased risk of developing Parkinson's in men, but not in women.

"It would be hard to think of a worse vehicle for delivering calcium to the body" Dr. Neal D. Barnard MD.

The China Study (the biggest study of nutrition ever undertaken) showed that a diet which avoids meat, fish and dairy products is the healthiest in terms of longevity and avoidance of disease.

The dairy industry is also environmentally costly.
Using the 'dairy products' sector the environmental benefits of reducing your dairy consumption by half are as follows:

The impact of animal welfare on dairy cows, and their calves, is not healthy for them either.
The increasing popularity of soy milk speaks for itself, and it is only a matter of adjusting taste buds. The economic weight of the dairy industry will ensure that soy is maligned. We have strong traditions relating to foods, supported by socio-political-historical pressures.

This was at first a comment by Matilda B. Thanks, Matilda. Emphasis added by me. - Editor 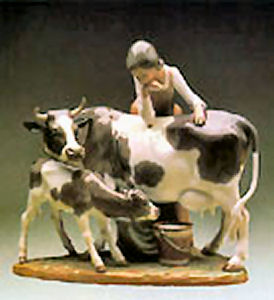 Cows have to give birth to a calf every year in order to produce milk. Mother cows are known to have highly developed maternal instincts and can bellow for days for their stolen babies! The killing of bobby calves, usually at 5 days old as unwanted by-products of the dairy industry, is one aspect that shows it is not a benign industry. We kill over one million new-born calves each year. In Australia, legal means of destroying these unviable calves on farm includes bludgeoning calf skulls with a hammer or shooting them in the head with a rifle or a mechanical bolt. Vealers are raised in crates to be anaemic, for white flesh.

The dairy industry is a high water consumer, and must take a lot of responsibility for the demise of the Murray-Darling food basin! We are also heavy exporters of dairy products. How sustainable is our dairy industry?

Methane emissions from dairy cattle contribute around 30% of all agricultural emissions that total an 18% contribution from agriculture, due mainly to livestock.

European style diary products can be replaced by more humane and sustainable plant-based ones such as soy, rice and oat milks.

Dairy products have naturally high levels of saturated fat which raises blood cholesterol and will increase vascular disease risk in many people. The traditional cuisines of many countries are dairy-free. Australia's Western-style diseases can be attributed to the amounts of animal-saturated fats we consume, including that found in dairy products.

The amount of water used to make a litre of milk is between 320 and 1000 litres. Soymilk requires about half the amount water of dairy milk. Soymilk is high in protein without the water consumption, the environmental impact of livestock, without the deaths of calves and cruelty to cows, and is healthier!