The writer of this article has returned home to Syria, after emigrating to a western country years ago. He reports on his arrival in Damascus, the capital of Syria, which is where much of the population has taken shelter from the activities of western backed 'rebels'. He last visited Aleppo in Syria between 2015-2016, for 9 months, shortly before the Syrian Arab Army, with the help of the Russians, managed to drive out ISIS. Photo was taken by the author on his current visit. (We split it up into smaller images due to size of initial image.) 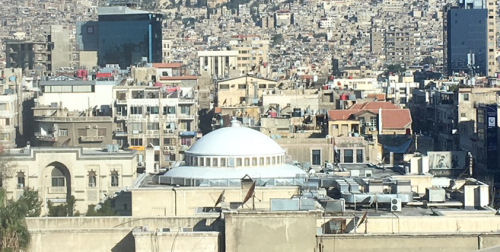 I’m in Damascus right now. I arrived yesterday to the capital with one of my uncles.

The msm propaganda is a nasty one.

As in the city, I’m feeling very safe, although it’s so crowded and with a lot of traffic jams. Flying jets’ sounds in the sky from time to time.

As for the daily random shells from the terrorists in East Ghouta upon the heads of civilians in Damascus city, and mostly on Old Damascus, where the ancient churches and mosques are located, almost no corporate msm is covering it or really cares about the lives of those civilians. This is the same double standard that had been used in East Alepppo in Dec 2016.

As for the people in E. Ghouta, the same scenario of East Aleppo had been followed by the terrorists, which is to prevent the people from leaving Ghouta to the government-held areas through the humanitarian corridors, and to take them as human-shields, and whoever tries to flee Ghouta is shot by snipers from the terrorists. The msm reporters are claiming that people don’t want to leave! Lies and nothing but lies!

Check out this report for good information: https://www.rt.com/newsline/421461-ghouta-evacuation-aid-ceasefire/

On yesterday’s local news, thousands of kidnapped civilians left to government-held areas, in a deal with the terrorists, or after the liberation of one chunk of the Ghouta. I didn’t read the full news but just a brief ones about what happened yesterday. The people gave different witness from the ones on the msm. They were relieved and happy to flee that war zone.

People of Damascus want that daily nightmare to end for good. The only way is by the surrendering of those terrorists and to leave Ghouta and go to Idlib, as they did everywhere before, and to help people go back to their homes and to have all necessary services for life (food, water, etc) which the terrorists are preventing the people of Ghouta from having.

Another play and fabricated clips are going on by the White Helmets (in both Ghouta and Idleb) to show a chemical attack and blame it on the government, to give an excuse for the US and it’s allies to strike Syrian forces. Russia gave a warning of such a scenario and that they will fight back if the west continued that silly play and provocation.

I’m staying for 3 days or so in Damascus to see some friends in a hotel, although we have a house, but it’s occupied by a far relatives to our relatives who are from East Ghouta but had left it few years ago to stay in the government-held areas and in our house - another evidence that people are against those terrorists who occupied their territories. The last time I visited Damascus was 12 years ago (Summer 2006, at the time of July War).

It’s the (copy-paste) scenario of East Aleppo all over again. Same lies, same propaganda, same UN hysteria , and it will hopefully end the same way by victory to the people and government against the terrorists.

ALEPPO, SYRIA, 11 Feb 2016: Our correspondent writes: "President Assad is not exterminating his people. I'm still alive, and no one said a word to me. If something bad happened to me in the near future, it would be because of the terrorists' policy of extermination. I'm living happily because there are Syrian soldiers who are defending us in hot summers and cold winters. The UN is lying as usual in their reports about Aleppo and Syria in general." 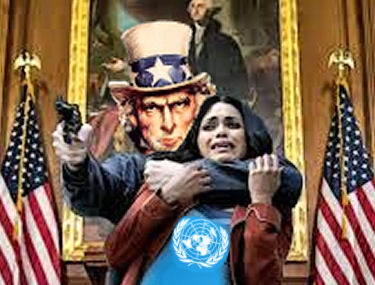 It's a new wave of propaganda that we have to face in Syria. Everything over here is way better than before. The Syrian Army and its allies are doing so well in Aleppo province (the city is still waiting though). I'm afraid though that the 'zombies' [means ISIS and their supporters -ed]of this world will take advantage of these lies and propaganda to 'justify' their future crimes, wars, and invasions. They did so several times in the past years. Each time the Syrian army succeed in defending the country, they (the trouble makers) create new conflicts and propaganda, a full package of lies, to twist realities on the ground and to end it to their sake and advantages. All the sacrifices of the Syrians would go in vain then. Let's hope that the zombies won't get away with it this time. People want this daily endless suffering to end as soon as possible.

I am doing very well here. I thank you all for remembering me and circulating my humble news.

The propaganda which is talking about hundreds of thousands of civilians trapped under siege in Eastern Aleppo had to be put under the analyzing lenses:

- Are these numbers accurate?
- Are they civilians or terrorists? Or are they the families of the terrorists?
- Are these images new or recycled? (they did so so many times so far, and i can't trust their claims anymore).
- if the SAA wants to liberate that part of Aleppo city or province, and the 'civilians' don't want to be trapped and want to leave, who is preventing them from doing so? The reality is that they are neither leaving nor letting the Syrian Arab Army (SAA) liberate those areas.

A 'human shields' scenario might be the right answer of that argument [i.e. what is really happening - Ed.], where they prevent the SAA from advancing while they blame it all on the SAA on the MSM.

A small news: Couple of days ago, two explosions took place close by to where I live, and it ended that the first one was from a random mortar shelled from the terrorists areas, where it hit a building's roof, but the next one was from the blowing of the warming fuel cistern on that roof that got fire from the first mortar. No one had been injured. Heavy smoke was seen, and the fire fighters came and took care of the situation. It's not a big news as you see, but it shows that those 'moderate opposition' are neither moderates nor opposition. Yet they dare to lecture about rosy noble humanitarian causes about Aleppo.

President Assad is not exterminating his people. I'm still alive, and no one said a word to me since I came. If something bad happened to me in the near future, it would be because of the terrorists' policy of extermination. I'm living happily here because there are Syrian soldiers who are defending us in hot summers and cold winters. The UN is lying as usual in their reports about Aleppo and Syria in general.