When your party is going off the rails, don't you have the right to shout out the windows for help? Geoff Dowsett is a member of the Hornsby Kur-in-gai Greens' Population and Sustainability Reference Group. He has been growing increasingly concerned about the failure of the Greens to take the issue of environmental sustainability seriously and make positive changes to their population policy. Geoff’s resulting activism on the issue of population numbers in Australia has been received by some Greens members with hostility. He is not the first and will not be the last Green to suffer for his convictions at the hands of party members. A threat of expulsion relayed by Greens candidate for Eden-Monaro, Tamara Ryan, is now in train, scheduled for the August Ordinary General Meeting to be held on Monday 12 th September 2016 at 6:30pm at Hornsby Central Library, 28-44 George St Hornsby NSW 2077. (Entrance in Hunter Lane). We publish the motion about this that was sent to Geoff and we report on Geoff’s reaction in this article. 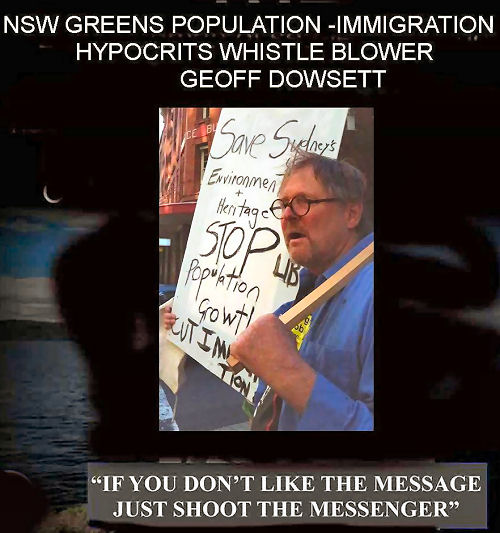 That, Mr. Geoff Dowsett’s membership of the Hornsby Ku-ring-gai Greens should be cancelled on the grounds that the member has, as outlined clause section 6.5.3 of our constitution, "placed herself or himself outside of the Group" acted in contravention of clause 6.5.3.2 of our constitution, in that he demonstrated repeated disruptive behaviour within the Group and behaved in a manner that brought the group into disrepute.

Due to the confidential and personal nature of specific incidents underlying this motion, the details of these events will only be discussed at the meeting."

Geoff says that he rarely attends meetings, so he doesn't think that his alleged 'disruptiveness' could be about disrupting meetings. He says that he thinks that the objections are probably about his energetic, persistent lobbying, using emails and Facebook posts, addressed to Greens members and MPs. He has sometimes received responses indicating that some Greens see his population policy activities as insulting and counter to their ‘safe speech’ rules.

The motion above cites Section 6.7 of the Greens NSW constitution. Geoff believes this has to do with sharing information to people such as Jane O`Sullivan and Sheila Newman who are not Greens members. At this stage he thinks this concerns sharing Mercurius Goldstein's response to a question he circularised to candidates and encouraged others to send similar questions about candidates’ attitudes on Australian population policy.

Other Greens candidates who responded to Geoff’s question did so on Facebook so their comments were in the public domain, but Mercurius responded to the NSW Greens Population Working Group. Geoff told Mercurius that he was forwarding Mercurius' response to Sheila Newman (candobetter.net) and Mercurious wrote,

“It's nice of you to share my responses with Sheila Newman and I appreciate her interest in the NSW preselection -- is she a Greens NSW member? As an author I'm sure Sheila can speak for herself without your assistance and I'd urge her to contact me directly if she's interested in following up on any matters.”

It is hard to believe that there is a valid case against Geoff, but three members have apparently asked the secretary to arrange for Geoff's dismissal.

Geoff says that he has frequently been abused by some Greens members who don’t like his views on population numbers. (We published Tamara Ryan’s response to Geoff here:http://candobetter.net/node/4935.) A few Greens members have persistently described him as a racist, xenophobe and, more recently, as sexist, publicly breeching Greens safe speech protocols but without reprimand within the party, he says.

Geoff has distributed an email to hundreds of NSW Greens MPs and members suggesting that none of the candidates for John Kay's now vacant Upper House seat are sufficiently qualified to represent the environment, quality of life, fauna and flora, or habitat of NSW. He came to this conclusion from their poor responses or failure to respond to a relevant question he sent to candidates [see below]. He said that the responses to this email 'displayed no knowledge, interest or inclination to admit that the Turnbull Government's record, high, excessive, unsustainable 457 Visa and middle class immigration intake should be returned to the long term average of about 50,000 net per annum from the current excessive 500,000 net per annum.’ With regard to the move to expel him, he has said that the Greens should read his message rather than shoot the messenger.

This is the text he sent to the candidates:

As a candidate for John Kaye's Upper House seat how about a strong statement and policy improvement suggestion from you to address the desperate need to stabilise Australia`s population growth? The current "economic" middle class so called skilled (non refugee) immigration rate of 500,000 per year including 457 Visa (a world record high intake) is not sustainable. Sydney's population is growing by 83,000 net per a under the Liberal Govt's Immigration scam. It is causing excessive impact on inadequate infrastructure, impact on natural eco-systems through urban growth and consumer demand. Increased traffic congestion in our major cities - sky rocketing housing prices. Of course the immigration rate is just what big business wants, particularly the housing industry, while our quality of life, natural environment and urban environment goes down the gurgler. The immigration rate is also closely linked with the insane growth economy which is addicted to continuing growth in consumption. It is HYPOCRISY of the Greens to have a policy of sustainable economy without a policy for a substantial reduction in immigration. Priority should be humanitarian i.e. for political and environmental refugees NOT wealthy middle class business migrants. When will the Greens members such as yourself bite the bullet on population ? I won't vote for you unless you make a statement indicating a clear commitment to reducing Turnbull's excessive Immigration and 457 Visa intake."(Geoff Dowsett. Member. Hornsby Kuringai Greens. Population/Sustainability Working Group Member. Statement above does not represent the views of all of the working group.)

We will be watching with interest and concern to see whether Mr Dowsett suffers injustice for his environmental activism. As noted in other articles on this site, e.g. ”Greens members harassed for expressing valid views on environment and population”, he is not the first Green to be pushed around for sounding the alarm on how rapid population growth and the intensification and expansion of human activity is threatening native animal habitat and quality of life in Australia. Geoff runs eco-bushland tours around Sydney national parks which are threatened by encroaching population density and its associated infrastructure and footprint. His blog on candobetter.net is at http://candobetter.net/blog/324.

Geoff Dowsett and the Greens, why and when he joined

Geoff says that he thinks he actually joined Hornsby Kuringai Greens about 10 years ago, but it could be more. He had been a supporter – letter-boxing – for instance and doing polling booth work for about 20 years.

He was friendly with an old Greens stalwart, Mervine Murchie, a Scotsman with trade union background--- who convinced him to join.

He finds that the Greens have changed a lot since then. They are very different. There were many more conservationists in the early days.

Geoff says that he has attended many community meetings organised by Greens and only one State Delegates Conference. He has placed Greens candidate placards in his front garden during elections and he has two Greens placards permanently in his front garden. One is high up in a tree and the other in ground. Have letter boxed----and handed out at polling booths. Meeting is 12th Sept 6.30 pm.

The following article publishes an email sent by Tony Recsei, President of Save our Suburbs NSW, to SOS members and friends. Dated Thursday, 26 May 2016, it is a report on his attendance at a luncheon organised by the Greater Sydney Commission (GSC) in Paramatta. The GSC is a growth lobby tool. Here Recsei points out that the 30 minute city does not exist as planners describe it and suggests that the Commission should investigate low density cities where the cost of housing is also low and find out what they are doing right, instead of continuing to visit high density cities. See the SOS NSW blogspot here.

Yesterday I attended a luncheon organized by the Greater Sydney Commission (GSC) at their offices in Parramatta. The GSC was formed to lead metropolitan planning for the Greater Sydney Region. Twelve people attended the luncheon, half of them being members of the GSC including chairperson Lucy Turnbull and chief executive officer Sarah Hill. The rest were from various government and non-government organisations.

A pleasant atmosphere prevailed and people talked freely. GSC Social Commissioner Heather Nesbitt introduced the discussion, emphasizing the need for livability and collaboration and trust. Sarah Hill said priorities include preparing district plans, getting out of the office and talking to people. There needs to be plans for a greater Parramatta, the Western Sydney Airport, linking infrastructure with planning, providing advice to the Minister and making awards and grants. Lucy Turnbull said they will try to get a whole of government approach.

In turn we were each invited to say what we felt.

· Save Our Suburbs focusses on the underlying rationale behind planning in the state. That rationale relates to increasing density. A fundamental tension results as the community does not want increased density. This dichotomy bedevils all attempts at consultation.

· Neither high-profile high-density advocate Professor Peter Newman nor anyone else can give me an example of a high-density city that does not suffer from the ills they claim high-density will alleviate.

· A previous planning minister, Brad Hazard had led a delegation to investigate planning in North America but only visited jurisdictions with high-density policies. They did not visit the more successful cities which happen to have low density policies.

· No advantages claimed for high-density policies stand up to any scrutiny. These policies cause increased congestion, unaffordable housing and adverse health impacts (such as a 70% increase in psychosis). Forcing in high-density when most people want single-residential reduces housing choice. High-density results in excessive greenhouse gas emissions. In high-rise per person energy consumption and embodied energy is double that of single-residential. Such emissions represent 30% of people’s annual emissions while transport represents only 10%.

Lucy Turnbull referred to the “30 minute city” - that is a city divided into sections where people in 30 minutes or less can easily get to work, shops, schools etc. and walk to many destinations. I asked where is such a place. People might initially find a dwelling near their place of work but subsequently change their job without moving house; other members of the household may work or study somewhere else. I pointed such reduction in travel times does not happen in high-density cities. For example Hong Kong has average travel times to work of 47 minutes compared to 35 minutes in Sydney. Also, in Hong Kong only about 20% of people work in the area where they live. This proportion is about the same as in low density Los Angeles. A city with “30 minute” sections is a figment of the imagination.

They asked what North American cities should Brad Hazard have visited. I suggested Houston as an example where houses cost about ¼ of their equivalents in Sydney and suggested the GSC should send a delegation there to see what Houston does right and what it does wrong.

My discussion took about 30 minutes of the 2 hour luncheon time.

As we left one of the GSC members said to me “Keep on keeping us honest”!