As was the case in 2007 when the previous Census Report revealed that Canada led all G8 countries in population growth, the results of this latest Census Report for 2006-2011 were greeted by media commentators and politicians alike with glee. It is as if we had won a trophy for achievement. But growth is not a solution, it is the root of our problems, and Canada's rapid population growth rate is cause for shame, not pride. 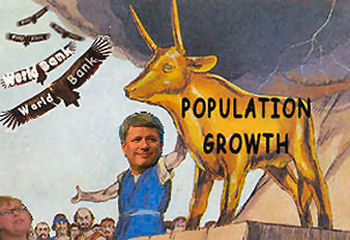 So, according to the latest Stats Can news, Canada had the highest population growth in the G8 since 2006. If we are to believe the tone in which that news is being reported, Canada has just won a contest and all Canadians should be cheering. By that reasoning, China and India should get a lifetime achievement trophy for population growth. While the Chinese have realized that unending population growth is a dangerous goal and have made concerted attempts to rein their numbers in, India has not. And Canada seems to think increasing its population is something we can't do fast enough.

Immigration Not A Cure For Rural De-population

Through the prism of my own personal experience and in the light of the Stats Can Census Report, I conclude the following.

There are advantages to living in economically “depressed” localities. One of them is that the cost of housing is lower. Since housing costs for the typical Canadian can eat up anywhere from 40% to 70% of disposable income, if those costs (in the form of mortgage payments, rents and/or property taxes) are lower, then so is the cost of living. Of course, if you are unemployed and living in a depressed area, these lower housing costs do not suffice to offset your lack of income. This is the reason that so many young people have left smaller rural or hinterland communities in Canada, communities like mine, which were once buttressed by a strong resource industry (forestry, mining or fishing). The latest census report, which takes a snapshot of the country’s demographic profile for 2011 is therefore somewhat deceptive. Yes, Canada has the fastest growing population in the G8 group, having grown 6% between 2006-2011, but the rampant growth in some major urban centres conceals the rapid de-population of outlying areas, which have lost their economic foundation. As demographer Ryan Berlin of “Urban Futures” put it, people are caught either in an upward spiral or a downward spiral. So what is the answer?

Well, it is certainly not to continue promoting rapid population growth through mass immigration--- for several reasons. We may be able to encourage and entice immigrants to depopulated regions, but it is doubtful that we can ‘direct’ them there permanently, given the mobility rights that are guaranteed by the Charter of Rights and Freedoms. After all, there is a reason why Canadians are leaving those areas.

The Green Contradiction----Disperse People and Concentrate Them

This is something that Green Party leader Elizabeth May seems not to understand. On the one hand, in responding to complaints that Canadian cities are straining under the pressure of government-induced population growth, she has proposed that immigrants be sent to small town regions crying out for people. On the other hand, like other ‘green’ and ‘progressive’ politicians in Canada, she argues that bigger and denser cities can grow and be ‘green’ at the same time. Allegedly, according to the official environmentalist party line, urbanites of such cities have lower per-capita carbon footprints. Therefore, to save the planet we need to “urbanize” all of it and restructure our cities. That is a polite way of saying that we must herd outlying rural people into growing cities and squeeze them in as tightly as we can. While most folks would describe this fate as bleak and claustrophobic, Greens describe it as 'vibrant', ‘walkable’ , 'efficient', ‘eco-dense’ and ‘green’.

Does Herding and Cramming People Into Big Dense Cities Make Them Greener?

Unfortunately, Mother Nature does not care about ‘per capita’ emissions, but TOTAL emissions, TOTAL energy consumption and TOTAL waste. Reducing per capita waste and consumption by half while doubling the population level is absurd and illogical. Moreover, it is not certain that the Green contention about lower per capita emissions is true. If urbanites in Vancouver, Calgary or Toronto or London, England for that matter, emit less ‘carbon’, what of the carbon emissions and waste that is expended by the offshore factories that export the products that these affluent, green and progressive urbanites consume? Who should be ‘credited’ with the ecological damage----the producers or the consumers? And what about the End of Oil? Since 1976, when the Science Council of Canada warned us that our population level will be constrained by resource limits, scientists like Dr. Michael Healey have argued for a Population Plan for this country that would take those limits into account. Many analysts like Canada’s Richard Embleton and Rick Belfour would argue that viable post-carbon Canadian cities of the future cannot exceed 20,000 citizens---or thereabouts. That would make Vancouver, which aspires to be the “Greenest City in The World”---and Metro Vancouver, greatly overpopulated.

But what about that old chestnut, that we need population growth to support our social safety net, and that continued mass immigration will preserve our age structure? Simply put, that argument is dead wrong, and has been demonstrated to be wrong by at least two studies, one done by the C.D. Howe Institute only a few years ago. What will support our aging population is not more people, or more immigrants or even “more young people”, but higher productivity from the people who work, along with perhaps, an upward adjustment in retirement ages. The problem is, population growth demands infrastructure expenditures that otherwise could have been made in improving productivity.

And speaking of better training, let’s deal with another old chestnut, that Canada has a shortage of ‘skilled” workers. The truth is, we have never taken a proper inventory of our needs. It is just taken as a ‘given’ that we will be favoured with robust economic growth and that its labour appetites must be satisfied by immigration. But what of the Canadians who have wanted the opportunity to be trained but have been passed over for the quick fix of air-lifting skilled staff from overseas? What also of First Nations youth---a vast untapped, neglected and growing demographic? Have they been offered the education, the trade skills that this future economy will demand? National Chief of the Assembly of Nations Shawn Alteo would answer an emphatic “No!”.

How ironic it is that the politicians of all four major parties and the apologists for the Immigration Industry typically invoke the “We-are-all immigrants. Only-the-First-Nations-people-are-true-Canadians” argument to justify their maniacal determination to pursue 1% compounding annual population growth for Canada? It is obvious that the welfare of these “true Canadians” is not among their top priorities. Instead of locating training and educational facilities and opportunities close to native reserves, which for the most part suffer 70-85% unemployment rates and third world conditions, Ottawa hands out temporary visas by the fist-full to workers that foreign corporations find convenient to import.

Meanwhile, big-city Mayors like Vancouver’s quintessentially “green and progressive” Gregor Robertson speak with a forked tongue. On the one hand, they brandish census statistics about their cities’ impressive growth as proof that they are livable and attractive, and boast about their efforts to paint this growth ‘green’ with conservation measures and benign transportation decisions which will be quickly erased by that same growth. On the other hand, they whine about the lack of federal funding for immigrant services, infrastructure and traffic congestion to offset the costs of growth. But never once does Robertson, or any Mayor in the land----save Toronto’s Rob Ford­---dare to address the source of these problems----immigration-driven growth. Undoubtedly, anyone with that kind of courage would be damned by the media, with the CBC leading the charge.

Still, politicians should note that Ford didn’t suffer any harm at the polls for questioning unlimited growth, did he? Canada's politicians and the media who have been cheering population growth in the last two days should learn something from that.