Van Badham, the author of an insulting Guardian piece against Dick Smith, (Thursday 7 September 2017) parades the usual cliches about 'educating women' to deal with population growth, despite the obvious fact that although women in Australia still have relatively high rates of literacy, our population just keeps growing faster and faster. Not because Australian women are having huge families, but because mass immigration from overseas contributes 60% of Australia's population growth. How is education going to fix that, Ms Van Badham? [16 September 2017: See new footnote #5.] 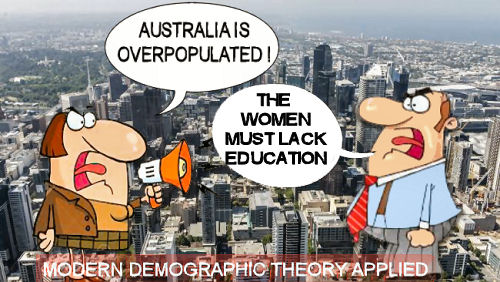 Most people in Australia and the rest of the Anglosphere are educated to believe in a sort of chronological continuous improvement, which they know as 'progress'. This 'progress' explanation is used to excuse all kinds of costs imposed by change. (We also hear, 'Change is good'). But much coercive and costly change is caused by catering to overpopulation and overdevelopment, and both these ills are engineered by powerful people. Over the last 20 years in Australia, the mainstream media has represented the growth lobby by pushing rapid population growth as an economic norm, as an inevitable demographic fact, and has played its only card - the race card - against the many more rational objections.

With the rise of the internet, the beneficiaries of engineered population growth use crowds of trolls to defend these costs and the growth lobby's excesses on the internet, so that when critics of rapid population growth go to 'progressive' sites that push growth, they will get all kinds of flack. The trolls are designed to frighten questioners away. People should not be misled to believe that the nasty attacks on people who question population growth are sincere - they are too similar and irrational to be spontaneous - but they do need to be countered.

A recent and gross example have been a majority of comments on an article, "I get why you're angry, Dick Smith. The ABC ignores my ideas all the time," in The Guardian (Thursday 7 September 2017) about Dick Smith's ad against massive population growth. You can see these comments here: https://www.facebook.com/theguardianaustralia/posts/1487301447971603. Many are grossly defamatory. [Revisiting the site two days later, I discover that, thankfully, many of these awful comments have been unpublished by The Guardian.] The article itself, although it is apparently by a professional journalist, is sarcastic, coarse, superficial and ageist, characterising Smith as sexist, a white man abusing his traditional privilege, an elderly xenophobe having a 'brain fart'.

The author of this gratuitously insulting piece, Van Badham, then parades the usual cliches [1] about 'educating women' to deal with population growth, despite the obvious fact that although women in Australia have relatively good (if deteriorating) educations, our population just keeps growing faster and faster. Not because Australian women are having huge families, but because mass immigration from overseas contributes 60% of Australia's population growth. How is education going to fix that, Ms Van Badham?

Don't let the facts stand in the way, Ms Badham

Immigration is a factor totally ignored by the so-called Demographic Transition 'theory'. Speaking as a population scientist, I would say that Dick Smith is on the right track and Ms Van Badham is ignoring 60% of the equation. However you will find that most Australian 'population experts' - read professional 'demographers' and friends of the growth lobby - also fall for the Badham arithmetic mistake, although they are all more mathematicians and economists than scientists.[2] They fall for it because they do not test it and they do not read around it or anything not produced in English.

Outside the Anglosphere bubble

It was to educate people with open minds that I translated Etienne Van de Walle's: “French fertility in the 19th century,” which you can read here: /node/4247. Van de Walles was not the only French population historian and demographer to write about how France had 'its demographic transition' before industrialisation, right after the Revolution. The Anglosphere is known for ignoring theories that question its own tenets, however, so no-one hears about it.

One brave American population historian, Paul G Spagnoli, dared to write about this strange turning away from scientific method in the Anglosphere, which is so dominated by political and economic ideology. You can read his paper, "The unique decline of mortality in revolutionary France,"(1997) here: https://www.ncbi.nlm.nih.gov/pubmed/11619481. Almost no-one paid attention to this eminent bilingual historian's significant analysis, because it did not suit the anglosphere bias.

Anyone talking population needs to know this

Seuil, France also published a multi-article review by population theorists which included Dupâquier and other notables, as Communications, 44, 1986. Dénatalité : l'antériorité française, 1800-1914., (1986).[3] The meaning of the title is "Fall in the birth rate: the French precedent, 1800-1914." There was both a fall in the birth rate and a fall in mortality, at the same time as there was a rise in marriages, a fall in age of marriage, and a decline in never-marrieds! Why? Well, the French used contraception - but they didn't need the pill; they used the sheath, withdrawal, and various pessaries. Contraceptives have been known forever,[4] but using them demands a will to do so. In the 19th century, as the state cracked down on use of contraceptives because they wanted more soldiers for war, bands of French activists went round the country selling them and teaching people how to use them, especially poor people in cities. (See Francis Ronsin, La Greve des ventres, Aubier, France, 1980.)

Prior to the French Revolution, France's population was either stable or grew very slowly. [5] Although forms of contraception have been available extending back into ancient history, this Ancien Regime population stability is thought to have been due to a different kind of population control, where quite high percentages of people never married, never had children, and where the average age of marriage was quite high (over 25 yrs old). People who did marry and have children averaged above 5 children and life expectancy was low, with many children dying in infancy.

The natural fertility myth and endogamy

The French demography historians, such as Jacques Dupâquier (who calls it a myth) and Henri Leridon, also question the so-called 'natural fertility' concept which Anglosphere demographers believe is demonstrated by the extreme fertility of the Hutterites. See, Bardet and Dupâquier, "Contraception: les Francais les premiers, mais pourquoi?" in the abovementioned Dénatalité : l'antériorité française, 1800-1914. Dupâquier and others refer to the power of endogamy in determining fertility opportunity. The French and most tribal people before colonisation, globalism, and the car, were endogamous. That is, they lived in villages (the equivalent of clans or tribes) where only rarely did anyone marry far beyond the village or tribe. Because of the small range of population numbers within a village or tribe this meant that, like a small game of musical chairs, not everyone would find a marriagable partner, either because they were too strongly related or because all possibles were already married or because they were outside their social class (homogamy).

Another brake on fertility was that lack of housing or a good income made people less attractive as marriage partners.

Transport and the Post-WW2 Baby Boom

The advent of relatively cheap cars brought about a sudden jump in the marriage and birth rates in many countries because people could live in new houses in places that had previously been too far from work and ammenities and they found employment in the post war fossil fuel economy. Hence more people became marriagable. This was called the "Baby Boom." Trains had also made a difference to employment opportunities and the viability of living in once out of the way places. Boats early brought marriagable strangers closer. Planes exploded trans-ocean marriage/fertility opportunities. The latest accelerator of marriage and fertility opportunity is probably the internet which permits romances that are detached from real circumstances.

However the problem of mass immigration remains an accelerant of population growth that is rarely acknowledged, although those who make open borders policy know it well. They just don't talk about it. Just think of how colonisation and war, by exploding endogamous traditions and driving people from their historic villages and tribal lands to cities in search of work has affected India, China, Africa, the Middle East ... Think how it has affected Australia - once occupied by a much smaller lighter footprinted population for 60,000 years. How much difference will the wars pushing people from Africa and the Middle East and the politicians inviting them to enter Europe's almost stablising population make? How much more will the globalisation of everything and open borders accelerate all populations and anihilate all diversity?

The author of this article, Sheila Newman, is an evolutionary sociologist specialising in population, environment and energy resources. Relevant to the theory expressed here, she has published, Demography, Territory, Law: The Rules of Animal and Human Populations, Countershock Press, 2012 See peer reviews and explanation here) and Demography, Territory, Law 2: Land-tenure and the origins of capitalism in Britain, Countershock Press, 2014 and she is currently working on the third volume in series, Demography, Territory, Law 3: Land-tenure and the origins of democracy in France. Her major thesis in Environmental Sociology, which included oil economics, was The Growth Lobby in Australia and its Absence in France, 2002. For where to buy these see her bio here: /node/1882

[1] [My translation]: "In researching factors to explain differences in fertility between different states in India, two authors proposed analyses based on the same methodology, multiple regression, focusing on each state. Zachariah and Patel (1984) concluded that a small number of socioeconomic variables (with the level of education achieved by women at the top) explained 91% of variation in birth rates. Jain in 1985 concluded in a similarly convincing fashion (explaining 90% of variation) that it was due to three major variables: age at marriage, infantile mortality, and use of contraception. Thus, each one could boast of having identified the key variables to Indian fertility, but both lists of variables were completely unrelated! We can understand why: both lists were not independent and the socioeconomic variables identified in the first article affected the variables taken into consideration in the second. Source: Henri Leridon, "Théories de la fécondité : des démographes sous influence ?", Population 2015/2 (Vol. 70), p. 331-373. DOI 10.3917/popu.1502.0331, pp. 336-337.

[3] Under the direction of the School of Higher Studies in Social sciences - Centre of Transdisciplinary Studies (Sociologie, Anthorpologie, Politics).

[5] Note from Sheila Newman 16 September 2017: I originally wrote that the population of the Ancien Regime 'was also stable for a couple of centuries'; I am ammending this to take into account a revised opinion in France, which is that the population may have grown very slowly. Also, after the French Revolution, France's population did grow, of course, despite a lower birth rate, because of the reduction in the death rate, the increase in marriages and the decrease in celibacy. I have not yet adequately researched whether the role of immigration in increasing growth rates was significant during the Revolution. Note that most documents of the Ancien Regime (such as they were) were lost during the French Revolution and estimating population size during that time, and growth, is not very reliable. With regard to the recent ammendment from two or more centuries of population stability (rather non-growth, due to huge demographic crises such as recurrent epidemics, wars and famines (famines were often related to wars and the depredations of soldiers on local food crops) to 'slow growth'; it is difficult to find the origin of this 'recalculation' and one wonders if it was not a political or a population-theory decision where, on a basis that the leap from estimates of 18-20 or 22m French until 1750 seemed too sudden compared to the first modern census of 1801, which found 29,361,000 people in France. The alternative to this would be to re-guess the population of France under the Ancien Regime at around 25 or even 27 million. This would then run up hard against the 18m estimated by Vauban at the end of the 17th century. That estimate was based on poll taxes by household.