The marches yesterday were really impressive, but there is a way that school children could be many more times effective in carving out their future on these issues. Australian and State governments are pretty resistant against democratic protests, and anyhow, our governments at all levels don't have much of a clue about what to do about providing energy to our increasing populations. Schools and schoolchildren could exert much more pressure and constructive effort at a local level and we hope they will.

I am trying to imagine myself as a 15 year old back at school and trying to make my own decision regarding the Climate Change rally today, planned weeks in advance. How capable would I have been to assess the science on Climate Change? Actually, even now I don't think I can really independently assess the data. I understand that greenhouse gases accumulate in the atmosphere and are associated with higher temperatures. I understand that the world production of Greenhouse Gas Emissions (GGEs) is increasing and that they come from the burning of coal, oil, and wood or anything combustible and are mitigated by the process of photosynthesis performed by trees and in fact all plants including plankton in the sea. Thank you plants and trees! 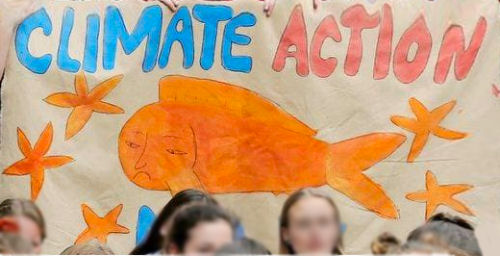 In Melbourne we are reducing our tree cover hand over fist as we build over our gardened suburbs far more densely. We add more GGEs as we add more people, since they all use electricity, they all in one way or another use cars or other transport. They consume goods, the production of which causes GGEs.

So I imagine how I would respond to the choice of attending a large rally whose purpose is to send a message to our federal government seemingly thumbing its nose at concern over climate change. In my 15 years would I have noticed any changes personally? I read about melting ice at the poles, I see You-Tube videos of polar bears unable to hunt due to loss off their ice environment. I hear of terrible droughts and fires in Australia often attributed to climate change. My teachers appear to be in favour of students taking half a day off school to attend the rally. What do I do? The popular kids are all attending the rally. If I don't, how will I be seen? What will be the fallout? Whatever I do, will be public as far as my peers are concerned. I have to make a decision and make my first political statement.

People are talking about being "on the right side of history." Of course when my own children ask me what I did I will want to be on the right side of history. However, the issue is somewhat intangible, abstract and seems to rely on a leap of faith. I don't want to be called "climate change denier." That sounds very much on the wrong side of history! I need to be a "believer." A bit of self talk is needed. I feel passionately about the natural world and I see assaults on it every day even where I live. Climate change affects the natural world but the science is complex for me, I have to take it on faith and I don't feel comfortable with this. Despite my misgivings and insecurities, I'll have to go today and join my classmates. I'm taking a punt that I am on the "right side of history." My parents do not approve of my attending but have said it is up to me.

I'm ambivalent but I am going.

A schoolteacher's thoughts on marching

I am a schoolteacher, and I am on my way to the Climate Change march. I am also ambivalent.

What are the children going to be learning in their 'first political statement' based on righteous indignation and general demands? I'm afraid they are going to be learning their first lesson in their political impotence. Because, as an adult who has tried to stop over-population, over-development and habitat destruction in this city and this country, I know that the government and the press are entirely capable of ignoring indignation on the steps of parliament from multiple residents' action groups.

As a teacher, I also do not dare to question this approach to environmental concerns, because, if I do, I will become a pariah. However I will tell you what I think we should be doing:

Our schools should not be marching in the city. We should be marching, if we are going to march, to our respective local councils, with carefully thought out lists of demands. First, we should be asking our local councils to make laws against tree removal and habitat destruction. Next on our list would be to ask them to investigate and cost new alternative power options and local food production options. Our schools should then put their science and other teachers to work with the children to examine the logistics and possibilities of these new technologies in the field - locally. What better place for us to learn to be effective, and to engage politically on energy and production than in our own communities and biophysical environments? This would also open up local careers in alternative industry avenues in energy and resources and planning. Youth suicide rates would drop, since political engagement close to home is an antidote to feeling worthless and powerless.

How might we notify the community of our serious intent on these matters? School children should be turning up, with their teachers, to every attempt to remove a tree in their local community and stop it until it is carefully evaluated. Perhaps we could form tree councils with others in our localities in order to promote alternatives to moonscaping our neighbourhoods.

How long, I wonder, would it take before we all realised that there should be local limits to growth? That would put a spanner in the authoritarian regime of planning for population growth and development. Thereby, by combining local action all over the country, we would accomplish far more than any Paris climate change conference.

I guess that is why we are all marching instead.