Friday, 17 June. In a horrible clown-world, the UK government has approved the extradition of WikiLeaks founder Julian Assange to the US to face criminal charges, despite an original British judge ruling that he should not be deported due to risk of suicide and a warning by his lawyer that he still remains a risk - and the fact that he has committed no crime. 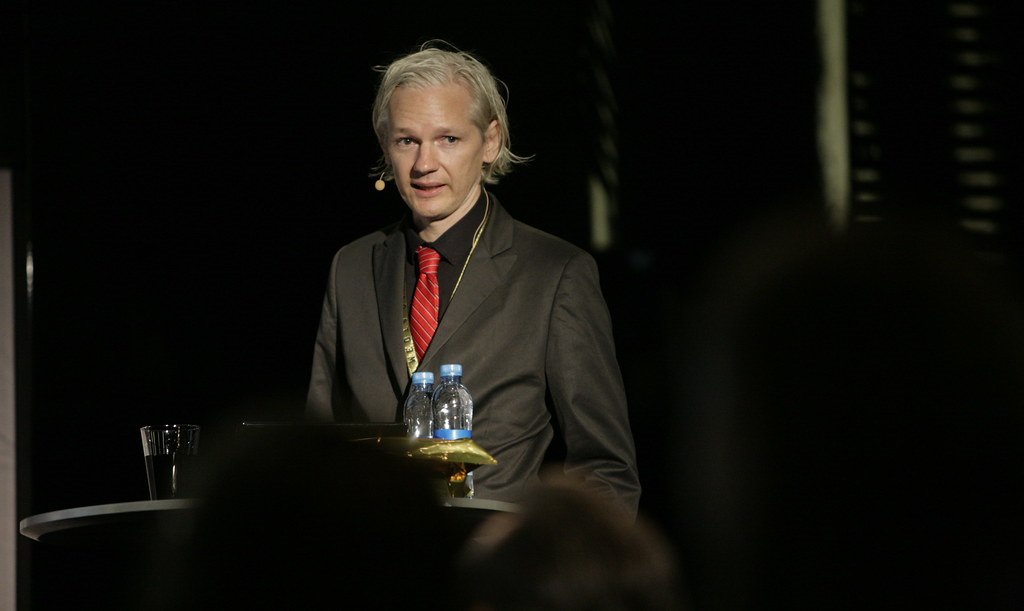 Not so long ago the middle classes were marching enthusiastically all over the western world to defend freedom of the press, after the massacre of journalists at Charlie Hebdo. "We are all Charlie!" they cried. Now there is hardly a peep about Julian Assange's cruel and unusual punishment for telling the world of war-crimes. Certainly no mass marches in the street. What's the difference? The mainstream press is singing a different song. It suited them to have people marching in the streets about Charlie Hebdo. Now, for some reason, it doesn't.

“Imagine that in 1946 the general-secretary of the United Nations had submitted a resolution to the General Assembly stating that Nazi crimes were so horrendous and despicable that the countries of the world needed to impose a blanket censorship on any public reference to or discussion of Hitler or his henchmen. Only the names of victims were to be mentioned or discussed. And the U.N. member countries, then, unanimously passed this resolution. If such a resolution had been proposed, passed, and fully enforced, what would we know today about the Nazi regime, the German history of that period, or the origins, premises, logic, and implied conclusions of national-socialist ideology and policies, both domestic and foreign? Without open and public discussion and debate through mention of Hitler’s name and unrestricted access to and use of his papers, speeches, and all other related documents, from whom would the world know why and what the Nazi system had done?” (Extract from article by Professor Richard M. Ebeling).

Justice and crime reporting must be open

Professor Ebeling's points are very well made in the full article. One thing Ebeling does not mention is that the police and justice system are supposed to serve us and we are supposed to keep track of them. Perhaps he does not mention this because it would take him into the personally dangerous realms of questioning his own state. However, the questions remain: If access to documents involving evidence, suspects' identities and trials, is removed from public examination, how can we be sure that justice is being served? How do we know that our courts serve our interests, rather than the interests of criminals and the military? An explosive case in point: If we do not have the material to examine, how can we assess what the New Zealand justice system is doing about the massacre in Christchurch? The arrested terrorist's face was pixelated in video of his being brought to be charged in court. The video record he apparently made of his mass murder, does not match up with what he is reported to have done. It seems to show him going round to two mosques, apparently for a second time, and shooting a mostly immobile piles of bodies. Ambulances did not arrive for over half an hour. It does not make sense. Perhaps there is an explanation, but how can doubts be satisfied if there is to be no discussion and no access to documents?

Many would call such doubts extreme: who could question Western governments?

Another thing that Professor Ebeling does not mention, is the fact that censorship has clearly been used to protect western evil in recent times.

I refer to the 'classification' of war footage taken in Iraq, leaked by Chelsea Manning to Wikileaks, which published it as Collateral Murder. This war footage was a 2007 recording made by US soldiers in Iraq (a country illegally invaded on an invented pretext and repeatedly pulverised). It records the shooting of unarmed civilians, including ambulance attendants and children, with the authority of the United States military, on the mistaken pretext that one of them may be carrying a machine gun. The video is taken from a powerful helicopter, which shoots hails of bullets into the civilians, a grotesque act of brutality and overkill. They shoot the ambulance attendants when those people are attempting to remove the wounded from the scene. They even shoot an obviously severely wounded man who is dragging himself on his belly towards a door. First they hope he will go for a gun to justify this shooting, but he doesn't, so they shoot him anyway. Twelve Iraqis die, including, among them, two Reuters journalists. This footage was censored by the US Government, but Wikileaks made it public. It is for this reason that the US wants to capture, imprison, and possibly execute past Wikileaks editor, Julian Assange, an Australian who has committed no crime - quite the opposite. The crime is all on the United States side. It is part of an unjustifiable series of brutal events associated with their illegal invasion of Iraq.

If you watch Wikileaks' Collateral Murder, you can assess that crime, and it has been discussed and reported all over the world. You can also assess Julian Assange's subsquent hounding by the United States government. His persecution and false painting as a criminal shows the price of revealing what elites consider their prerogative: mass murder and management of the mass media. Ironically, again, Collateral Murder has been republished many many times, by media outlets which have not been persecuted and which, like cowardly collaborators, have failed to stand up for Julian Assange. Fortunately it has not been recensored. The video embedded in this article is commented on by Julian Assange and Ivan Eland (US Defense analyst and ex-Cato institute director), and compered by a mainstream Al-Jazeera corporate news interviewer. The Al-Jazeera presentation and interview took place in 2010. It is worth looking at as well to see Julian Assange before his demonisation, to remember why saving him from the United States is so important.

And remembering why it is so important to stop censorship - that it is our responsibility to know what is going on, not to accept what we are told is going on as if we were children. Indeed, terrorism by private citizens does not begin to compare on the scale of terrorism by US-NATO.