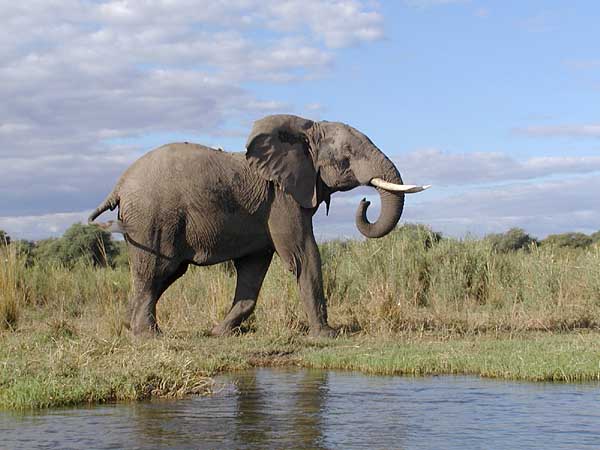 After the elephant tusk ('ivory') trade had decimated the African Elephant population from 1.3 million to 625,000, finally in 1989 the Environmental Investigation Agency (EIA) imposed a ban on this international elephant tusk (ivory) trade.

Ten years on, Zimbabwean dictator, Robert Mugabe, lifted the ban along with Botswana, Namibia, and South Africa and legalised the sale of elephant tusks from elephants they claimed (a) had died naturally or (b) been shot because they were violently aggressive or for 'problem-animal' control. In 1999, the Convention on International Trade in Endangered Species of Wild Fauna and Flora (CITES) authorized an auction of 50 tons of elephant tusks (ivory) from these four countries to the value of USD$5 million. Notably, the demand for elephant has been driven outside the African continent, in this episode mainly by Japan. [I could find a comparable solution for problem Mugabe control]

"The growing demand for elephant tusks (ivory) has increased black market prices from $200 per kilo to $850 per kilo in the past four years thus creating a big financial incentive for poachers. Michael Wamithi, program director for International Fund for Animal Welfare’s global elephants program, and former director of the Kenya Wildlife Service, declared: "An estimated 20,000 elephants are slaughtered annually for the trade in their tusks. Many African elephant range states clearly do not have the capacity or resources to combat these massive attacks on their countries' wildlife heritage and the burgeoning markets in China are only fuelling these attacks."

The Environmental Investigation Agency (EIA), which exposes environmental crimes, said CITES had ignored appeals from other African nations not to increase pressures on their elephant populations which were already struggling with wars, instability, droughts and poverty. EIA chairman Allan Thornton said: "Responsibility for the poaching of 20,000 elephants in Africa each year will now lie with those who supported China obtaining legal ivory trade even though they continue to be the world's biggest destination for poached ivory."SOURCE

This elephant tusk (ivory) carving (photo) is a gift from China presented to the United Nations in 1974. It depicts the Chengtu-Kunming railway, which was opened to traffic in 1970. The sculpture was carved from eight elephant tusks. In elephant terms, four mature bull elephants were killed for this elaborate trinket.

One wonders whether the United Nations is still pleased with its eight bull elephant tusk trophy (shot and hacked off from a bull elephant like that above)? 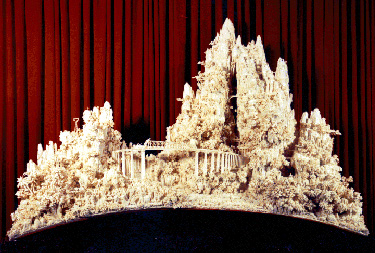