Being a Two-Way Player on Team "IPAT" 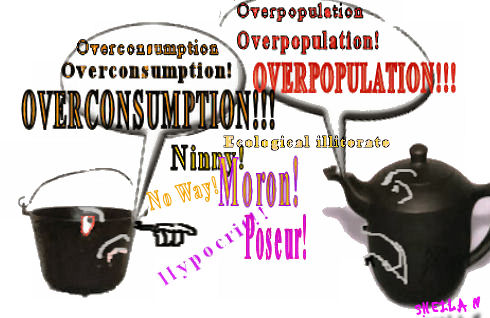 So I immediately resolved to sound out the missing tune that would make an effective chorus. It would be “overpopulation, overpopulation, overpopulation”, and I would use my voice to sing that message loudly because, frankly, I can’t afford or take the time to learn to play another instrument. As soon as the Environmental Establishment Orchestra includes my tune in their program, and gives it the prominence it deserves, I will stop singing solo and apply to join them. They after all have the resources to go on the road with their act, while I can only sing in the shower or yell out the lyrics on the Internet.

But until that day, I will specialize in the one half of the equation, population level, without which there can be no comprehensive understanding of our environmental predicament. I will play left wing on a hockey team overstocked with centre forwards and right wingers. Under new management and coaching, perhaps my team, the “IPATs, will demand all-around players—“two way” players who can play the complete game. Like golfers who don’t try to win the match with “hole-in-one” strokes.

It is people who consume, not ghosts. Reduce their numbers and each can consume more sustainably if they recognize their limits and are rewarded for obeying them

Population growth is the great multiplier of evils. Solve it and so many other problems of secondary concern become easier to solve. And it is much easier to solve alone than challenging popular consumptive habits. Many more people can be reconciled to lower fertility and lower immigration than are willing to see their standard of living drop to comply with lower consumption targets. The vast majority of Swedes, the world’s most affluent nation, are wanting to see immigration cut and a low birth rate persist, rather than sacrifice their standard of living. In 2006 the Dyskos poll revealed that 60% of them were not willing to make any material sacrifices to fight global warming. The working class majority there and here, are skeptical and intolerant of environmentalism that speaks with a middle class voice, and uses the same moralizing sermon that that voice gave them in the 1930s and other challenging times. The voice that cried “Hold the line on inflation” , or “suck it up for the boss”. Sermons given by preachers who preached chastity then drove off in a limousine to the whore house. Green yuppies won’t impress the working poor by putting solar panels on their 4000 square foot waterfront homes and taking their hybrid cars to the airport for their annual overseas trips to Mexico or Bali. If you never had to drive a “beater” to keep food on the table you have no moral authority to prescribe a carbon tax or a Prius. And no credibility if you have sired more than two children.

“Too many people consuming too much. consumption. Neglect one factor and you neglect both. You are in denial.” But “too many people” is the Achilles heel of growthism, and the one that deserves priority attention.

I wonder why the Swedes as a nation are able to see that they will destroy their quality of life, standard of living and environment if they increase population , yet Australians either can't see it or can't get their voices heard where it matters. There must be an answer to this. It must lie with the level of involvement of the people in government decisions and in the extent to which the people of Sweden have a say in their destiny as a nation compared with Australians and Canadians