You’re the culprit. Unfolding collapse is down to you.  Forget population overshoot. You’re consuming too much. Own it!

I  can’t believe it.  How time flies!  Why it was 11 years ago that the global human population reached 7 billion!  It seems like yesterday! I remember it well.  That was when Suzuki said that it was no big deal: http://candobetter.net/node/2658

And now here we are in mid October of 2022 and in a month from now, on November 15 th , humanity will reach 8 billion!  Wow.  Celebrations are in order! 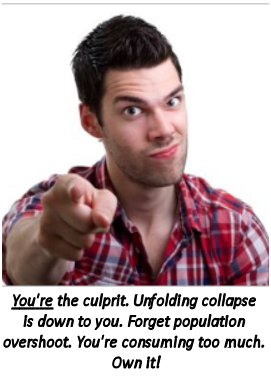 How should we mark the occasion? I know, let’s all have a serving of red meat and plan for a third kid.  Better still, hop on a plane and drop in on your relatives on the other side of the country.   Or travel to a tropical destination, as you are entitled to do every year.   Foreign vacations are a human right, after all.  Just imagine 8 billion Marco Polos traversing the planet every year… Mother Nature would be tickled to death. Literally.

Now of course there will be a chorus of doomsayers who say that population growth is killing the planet. That 8 billion people is far beyond the Earth’s carrying capacity. That we are killing off a million or more non-human species every year.  That we are compromising the biodiversity services upon which we depend.  That our human economy is merely a branch plant of the biosphere.  And on and on.

But these pessimists---Malthusians I think they are called---don’t understand that no matter what we destroy or how many natural non-renewable resources we deplete, human ingenuity will step up and rescue us.  The Green  Revolution is a case in point.  Sure, Norman Borlaug warned us that its benefits would be short-lived if we didn’t address overpopulation.  But he can be forgiven for his Malthusian beliefs, which were in fashion then.

Thankfully, we have moved on from there. We left over-population concerns in the museum where they belong.   And we can thank the new generation of environmentalists for that.  Faced with the possibility that corporate funding of Green NGOs might dry up if they continued to identify population growth as a key variable of total environmental impact,  they came up an ingenious oxymoron. Behold, “Smart growth”! They told us that “It is not whether we grow, but how we grow.”

Other  mantras came to the rescue.  “It is not how many of us there are, but how much we consume.”  And, “If everyone in the world consumed as much as Americans do, we would need 4 planets.”  And, “If  we lived like Gandhi rather than Gates, there would be enough to go around”.   The belief that there is “enough to go around” if resources were evenly distributed is the bedrock assumption of modern environmentalism.  The religious core of the Green-Left ideology.  Facts don’t matter.

Another belief Is equally axiomatic   Climate change is the only relevant metric of environmental degradation.  It really doesn’t matter if Nigerians or Central Africans have a bushel of children because their  GHG emissions are relatively  negligible.  Habitat loss? Deforestation? Well that’s down to “human activity”.  Of course the human activity of unprotected copulation doesn’t come up.  Besides, any suggestion that brown and black folks in other continents might be held even partially responsible for any negative ecological impacts is clearly racist.

Here is where George Monbiot comes in.  The most articulate and renowned exponent of Green-Left ideology, the ideology that represents a fusion of environmentalism and rehabilitated Marxism. Marxism that re-invented itself by hitching a ride on the environmental movement, and commandeering it,  dumping its Malthusian remnants and demonizing those who would dare to re-introduce them.  That is when the  environmental movement ceased to be the environmental movement.  Instead,  it was the climate movement.  Or shall we say the climate-fixated movement. Henceforth, it was all about climate change.  Gone were the naturalists.  The bird watchers. The conservationists.  Gone---or marginalized.  Hey, no loss there.  Most of them are old white men, relics of white privilege who connected the dots and noticed a correlation between human number s and the world going to hell.

There was a brief moment in the first decade of the 21 st century when these relics succeeded in re-injecting population into the conversation.  But George Monbiot beat them back.  From his perch in the Guardian pulpit, he maintained that, typically, those who make noise about global population overshoot are privileged white people in developed countries. Rather than curb their own consumption, these privileged white people  blame people of colour with big families in less developed countries.   Green-Left Marxists have picked up that weapon and wielded it mercilessly.  Their clarion call is “climate justice”,  a slogan that melds the social justice agenda with ecological sustainability.

“Don’t blame mothers for climate change” is another mantra.  Especially mothers in Africa. The blame game is central  to the Green-Left mentality.  The blame game.  Assuaging guilt and assigning blame.  Feeling good and feeling righteous.  The late Michael Crichton observedthat environmentalism had become a surrogate for Christianity. A secular belief system that filled the hole that declining faith left after God was pronounced dead.   There is merit in that argument, I think.

George Monbiot is the Pope of this movement,  the Holy Oracle of population-denialism.  His downplaying of the population factor can be characterized as Papal Bull-shit.  His omission of “the big dog” in the IPAT equation,  the “P” for population,  is tantamount to a “Silent Lie”, as Mark Twain called it.

That is why it would be fitting to designate each day where humanity has added another billion to Earth’s burden as “Monbiot Day”.   A day to celebrate these demographic landmarks as inconsequential markers on the path to civilizational collapse.  So there are 8 billion now.  So what?

Let’s party! Have a drink, and another, and another.. .Remember, it is not how many drinks you swallow, but how you swallow them.  Is there a Green way of getting drunk?  There must be, because the alternative of abstinence would be too much…er…too little to swallow.  How about a tall mug of Business-As-Usual  90% alcohol? You can down it and still feel good about yourself in the morning!